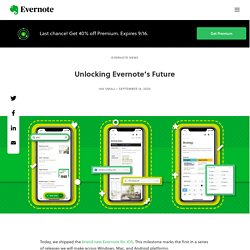 This milestone marks the first in a series of releases we will make across Windows, Mac, and Android platforms. Anyone who’s followed Evernote’s progress knows this moment has been a long time coming. Much longer, in fact, than we expected when we set out to “focus on the basics” in January 2019. Sometimes, the basics aren’t basic at all. Not when millions of people are relying on you, each with unique needs and ways of using Evernote.

Introducing the New Evernote for iOS. Staying Focused on the Road Ahead. It’s been several months since I last wrote to you about Evernote’s progress, and in that time the world has changed in ways few people could have imagined. 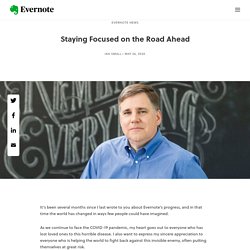 As we continue to face the COVID-19 pandemic, my heart goes out to everyone who has lost loved ones to this horrible disease. I also want to express my sincere appreciation to everyone who is helping the world to fight back against this invisible enemy, often putting themselves at great risk. Like every other company, Evernote has also had to face unexpected challenges and risks. We have always had a distributed team, with people spread across seven offices in the United States and around the world.

But we’ve had to transform into a 100 percent work-from-home company, virtually overnight. Introducing Evernote for Gmail. When was the last time you scrolled through your inbox trying to find a particular email with important details—but couldn’t easily find it? 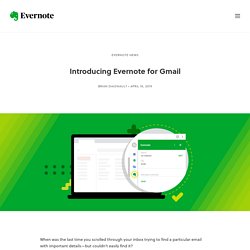 If you’re like most people, your life is buried under inbox overload. Despite your best intentions, emails keep coming…and coming…and coming. 9 Different Ways To Save Stuff in Evernote. If you think that Evernote is a good place for taking notes, you’re right. 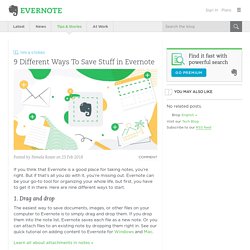 But if that’s all you do with it, you’re missing out. Evernote can be your go-to tool for organizing your whole life, but first, you have to get it in there. Here are nine different ways to start. 1. Drag and drop. 38 Things You Should Save in Evernote. 5 Simple Ways to be More Productive with Evernote on Your Phone. For some of us, smartphones have become one of the greatest threats to our productivity. 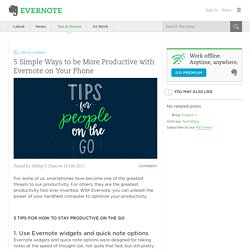 For others, they are the greatest productivity tool ever invented. “Hey Siri! Create A Note In Evernote” Posted by Anthony Bartlett on 19 Sep 2017 Comment Inspiration can strike at the most unlikely times. 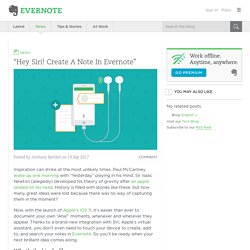 Paul McCartney woke up one morning with “Yesterday” playing in his mind; Sir Isaac Newton (allegedly) developed his theory of gravity after an apple landed on his head. History is filled with stories like these, but how many great ideas were lost because there was no way of capturing them in the moment? Now, with the launch of Apple’s iOS 11, it’s easier than ever to document your own “Aha!” What’s the big deal? In a world that seems to be moving faster every day, keeping track of your thoughts and ideas can be a real challenge. New Evernote Tables and More. We’ve heard how many of you love using tables to organize your information and ideas, so we’ve been hard at work to make them better. 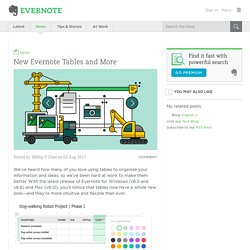 With the latest release of Evernote for Windows (v6.5 and v6.6) and Mac (v6.12), you’ll notice that tables now have a whole new look—and they’re more intuitive and flexible than ever. Even if you wouldn’t exactly call yourself a fan of tables, once you start using them to track projects, organize information, and break down complex ideas you’re presenting to others, you may find our newly designed tables hard to resist. Table editing made simpler Sometimes, it’s hard to know just how many rows or columns you’ll end up needing. No worries—now, you can easily add as you go. Not sure where you want a row or column to go? You can also merge cells now. Geek out by grouping adjacent table cells together, adding more layers of organization to your tables. Clarify with color Adding background colors to your tables is easier than ever. All the columns you need. Note-Taking. 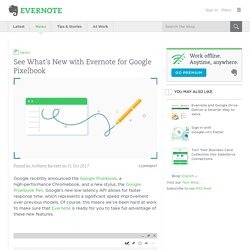 Google’s new low-latency API allows for faster response time, which represents a significant speed improvement over previous models. Sketching in Notes Arrives on iPad and iPhone. The note is a super flexible creation and collection space. 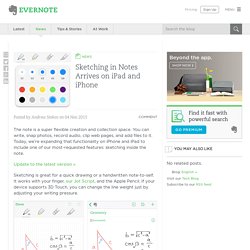 You can write, snap photos, record audio, clip web pages, and add files to it. Today, we’re expanding that functionality on iPhone and iPad to include one of our most-requested features: sketching inside the note. Update to the latest version » Sketching is great for a quick drawing or a handwritten note-to-self. It works with your finger, our Jot Script, and the Apple Pencil. Sync. Publish a book from Evernote with FastPencil. As National Novel Writing Month enters its final days, some writers will be happy just getting to the finish line, while others are looking ahead and thinking about turning their rough manuscripts into polished, self-published books. 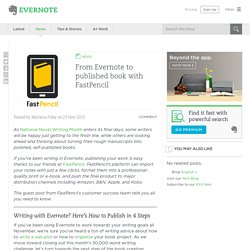 If you’ve been writing in Evernote, publishing your work is easy thanks to our friends at FastPencil. FastPencil’s platform can import your notes with just a few clicks, format them into a professional-quality print or e-book, and push the final product to major distribution channels including Amazon, B&N, Apple, and Kobo. 3 Ways Evernote Helps You Harness Ideas in Slack. Whether you’ve been using Evernote for nine minutes or nine years, you’ve no doubt seen how it can help you (or your entire team) become more productive at work. But the road to greater team productivity is far from smooth. Paradoxically, the very apps promising to liberate us can actually make it harder to get anything done, by creating more places for our ideas to hide. Here at Evernote, we believe the secret to getting more done isn’t more apps, but making sure that the apps we do have play well together. Jotting down a thought or finding an idea worth sharing often happens when we’re doing other things, such as chatting with co-workers.

Evernote and Google Drive Deliver a Smarter Way to Work. More and more in our cloud-centric, mobile world, the secret to productivity lies in linking great services together. Every day, Evernote customers create millions of notes that contain links pasted from Google Drive, and they asked for a better way to connect the ideas they keep in Evernote with actions they take in Google Drive. Today, we’re proud to announce that Evernote and Google Drive now work better together, making it easier than ever to capture, organize, and collaborate on whatever is on your mind.

Google Drive and Evernote: A natural pairing More than half of all Evernote users also have a Google Account. Now, everyone using Google Drive can access their Drive files in Evernote. How does it work? All the files you keep in Drive are now easier to access in Evernote. Evernote comes to Windows Store, Edge, and the Outlook app. It’s been a busy season here at Evernote HQ. We’re rolling out product improvements, finding new ways to make productivity easier by linking Evernote to other great apps, and listening to amazing stories from our customers.

And with the release of Windows 10 Anniversary Update on August 2, we have several pieces of great news to share. Evernote for Windows enters the Windows Store Evernote for Windows received a major upgrade recently, and we’re pleased to announce that the latest update is being made available in the Windows Store. This full-featured version of Evernote replaces Evernote Touch, a companion app that offered only a limited view of what Evernote can do. Learn more about the update »