The six biggest mistakes of managing an introvert 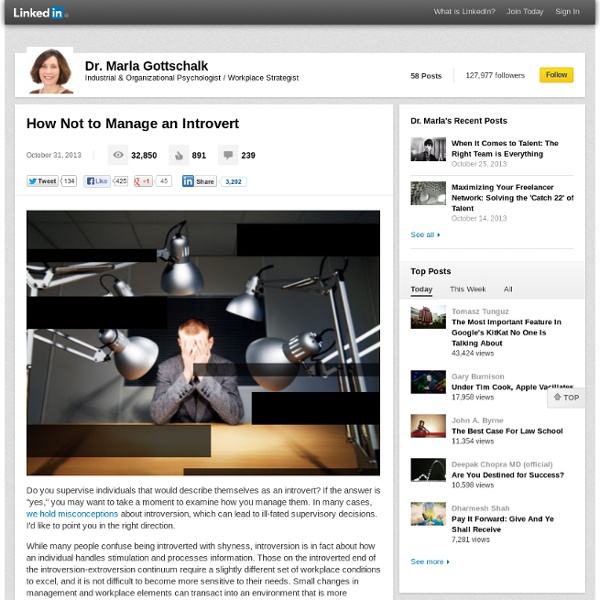 Are You an Introverted Boss? - Douglas R. Conant by Douglas R. Conant | 10:19 AM April 4, 2011 Every time I’ve taken a Meyers-Briggs test, I score high on the introversion scale. So how do I manage this? Introverts need thinking time. Introverts aren’t as aloof as they appear. One of the best ways I’ve found to help people overcome their discomfort around my behavior is to simply declare myself. I’ve also found that doing this helps people become much more comfortable about declaring themselves to me. Introverts benefit from familiar touchstones. In the end, we introverts never really change our stripes, though we too often put ourselves through painful contortions in attempting to adapt to other people’s styles. If you are an introvert — or work for one — what are the most successful strategies you have discovered? Douglas R.

untitled Why Extraversion May Not Matter Recent research evidence suggests that while extraversion is predictive of many positive social outcomes, it may not be extraversion itself that matters. Instead, it may be possession of social skills or competencies that are better predictors of social outcomes than personality constructs such as extraversion. Let me explain. Extraversion is a core personality trait that is associated with high levels of energy, expressing emotions, and seeking the company of others. However, social skills come into play. In a very recent study, we found, consistent with previous research, that extraversion was related to both the attainment of leadership positions and a self-rated measure of leader effectiveness. This makes sense. Think about some of the extraverted folks in entertainment—the Robin Williams, or Jim Carrey types. So, personality matters, but skills and competencies may matter more when it comes to complex social behaviors such as leadership. Riggio, R.E., & Reichard, R.

Extroversion and introversion The trait of extraversion–introversion is a central dimension of human personality theories. The terms introversion and extraversion were first popularized by Carl Jung,[1] Although both the popular understanding and psychological age differ from his original intent. Extraversion tends to be manifested in outgoing, talkative, energetic behavior, whereas introversion is manifested in more reserved and solitary behavior.[2] Virtually all comprehensive models of personality include these concepts in various forms. In any case, people fluctuate in their behavior all the time, and even extreme introverts and extroverts do not always act according to their type. Varieties[edit] Extraversion[edit] Extraversion is "the act, state, or habit of being predominantly concerned with obtaining gratification from what is outside the self".[4] Extraverts tend to enjoy human interactions and to be enthusiastic, talkative, assertive, and gregarious. Introversion[edit] Ambiversion[edit] Measurement[edit]

So Apparently There Are 4 Kinds of Introversion Photo: IPS/UIG via Getty Images Introversion, thanks largely to Susan Cain’s 2012 best seller Quiet, is having something of a cultural moment. Once a mostly misunderstood personality trait — and often considered a behavioral defect when it was considered at all — it’s now the subject of countless other books and online listicles (and, more recently, parodies of listicles). And as more regular, non-scientist types started to talk about introversion, psychologist Jonathan Cheek began to notice something: The way many introverts defined the trait was different from the way he and most of his academic colleagues did. “When you survey a person on the street, asking them to define introversion, what comes up as the prototypical characteristics … are things like thoughtful or introspective,” said Cheek, a psychology professor at Wellesley College. And yet neither of these things are part of the definition of the trait according to scientific literature. Quiz: What kind of introvert are you?