Have you ever worked with somebody who was truly terrible at their job, but they went around suggesting the company would fall apart without them? That’s the Dunning-Kruger effect.

It’s when you are so unskilled at a particular endeavour that you lack the necessary critical skills to assess your performance, so you default to assuming you are very good at it. Ironically people who are highly skilled sometimes have the reverse of this bias, where they are so cogniscent of the minor errors they have made that they act like they are doing a terrible job (known as ‘imposter syndrome’). Impostor Syndrome: Why You Feel Like A Fraud And How To Overcome It. You don’t belong here. 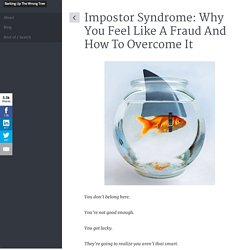 You’re not good enough. You got lucky. They’re going to realize you aren’t that smart. Ever heard this voice in your head? You’re far from alone. More than 70% of successful people have felt it at one point. Via The Secret Thoughts of Successful Women: Why Capable People Suffer from the Impostor Syndrome and How to Thrive in Spite of It: In a study of successful people by psychologist Gail Matthews, a whopping 70 percent reported experiencing impostor feelings at some point in their life.

The Impostor Syndrome. Does Remote Work Increase Our Risk Of Impostor Syndrome? The impostor phenomenon, also known as impostor syndrome, has been generating buzz in psychology and business circles since the 1970s. 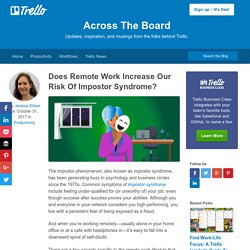 Common symptoms of impostor syndrome include feeling under-qualified for (or unworthy of) your job, even though success after success proves your abilities. Although you and everyone in your network considers you high-performing, you live with a persistent fear of being exposed as a fraud. And when you’re working remotely—usually alone in your home office or at a cafe with headphones in—it’s easy to fall into a downward spiral of self-doubt. There are a few aspects specific to the remote work lifestyle that can make anyone’s impostor feelings flare up. Understanding the reason you’re feeling increased self-doubt, then waking up everyday with a plan to overcome those feelings, can get you back to thinking, “I got this.” (Note: In this article, people experiencing impostor syndrome are occasionally referred to as “impostors” for the sake of brevity. Dunning-Kruger Effect: Why People Remain Incompetent. The Dunning-Kruger effect is the finding that the poorest performers are the least aware of their own incompetence. 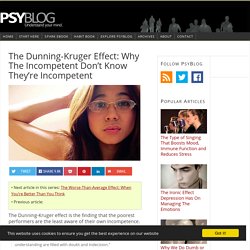 “One of the painful things about our time is that those who feel certainty are stupid, and those with any imagination and understanding are filled with doubt and indecision.” The quote above comes from the philosopher Bertrand Russell. Psychological research has now shown he was right. The effect has been: “…replicated among undergraduates completing a classroom exam (Dunning, Johnson, Ehrlinger, & Kruger, 2003), medical students assessing their interviewing skills (Hodges, Regehr, & Martin, 2001) clerks evaluating their performance (Edwards, Kellner, Sistrom, & Magyari, 2003), and medical lab technicians evaluating their on-the-job expertise (Haun, Zeringue, Leach, & Foley, 2000).” The reason for the Dunning-Kruger effect seems to be that poor performers fail to learn from their mistakes. As Socrates once said: “The only true wisdom is to know that you know nothing.”

The Worse-Than-Average Effect: When You're Better Than You Think. People underestimate their ability at stereotypically difficult tasks like playing chess, telling jokes, juggling or computer programming. Recently I covered the Dunning-Kruger effect which explains why the incompetent don’t know they’re incompetent. But there’s a flip-side to the Dunning-Kruger: sometimes the competent don’t know when they’re competent. This is the worse-than-average effect. Lack of Esteem. Fear of Success. Self-Criticism. Dunning Kruger Effect. 5 Ways to Banish the Belief That You're Not Good Enough. How to Overcome Imposter Syndrome. Have you ever felt as though, no matter how much progress you make or success you achieve, you don’t truly deserve your accomplishments? 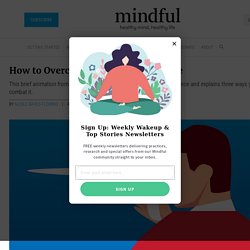