« Forgiveness does not change the past, but it does enlarge the future. » Paul Boese

« There are two types of apologies. One by people relieving their conscience.

The other is by those who are caught. Never trust those who apologize after being caught. » Nassim Nicholas Taleb. Psychology of Forgiveness: 10+ Fascinating Research Findings. In life, we can hold on to a lot of anger and resentment. 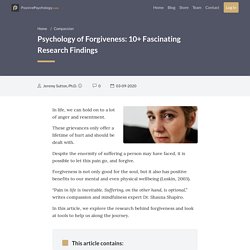 These grievances only offer a lifetime of hurt and should be dealt with. Despite the enormity of suffering a person may have faced, it is possible to let this pain go, and forgive. Forgiveness is not only good for the soul, but it also has positive benefits to our mental and even physical wellbeing (Luskin, 2003). “Pain in life is inevitable. Suffering, on the other hand, is optional,” writes compassion and mindfulness expert Dr. In this article, we explore the research behind forgiveness and look at tools to help us along the journey. The Science Behind Forgiveness: 10+ Findings Dr. When Luskin began his research, there were few studies in the field of forgiveness and limited knowledge of the tools that could help those who had suffered the most. In the absence of clear guidance, Luskin began his work with several untested assumptions: What is Forgiveness and What are the Benefits? If forgiveness is divine, does one need to be a saint? 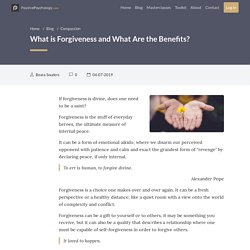 Forgiveness is the stuff of everyday heroes, the ultimate measure of internal peace. It can be a form of emotional aikido, where we disarm our perceived opponent with patience and calm and exact the grandest form of “revenge” by declaring peace, if only internal. Why is Forgiveness Important? Learn to Forgive Yourself No Matter What. One of the greatest, most unproductive and destructive mind traps many of us face is self-blame. 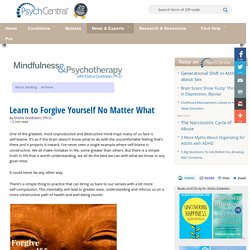 It’s as if the brain doesn’t know what to do with the uncomfortable feeling that’s there and it projects it inward. I’ve never seen a single example where self-blame is constructive. We all make mistakes in life, some greater than others. When You Can't Forgive. 5 Reasons Forgiveness Does Not Work. Forgiveness is the final form of love -Reinhold Niebuhr To forgive is to set a prisoner free, and to realize that the prisoner was you. 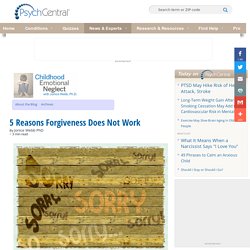 Forgiveness is Not a Menu Option. Every time I talk about forgiveness, I run into disagreement. 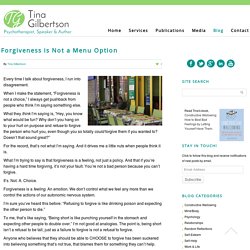 When I make the statement, “Forgiveness is not a choice,” I always get pushback from people who think I’m saying something else. What they think I’m saying is, “Hey, you know what would be fun? Why don’t you hang on to your hurt on purpose and refuse to forgive the person who hurt you, even though you so totally could forgive them if you wanted to? Doesn’t that sound great?” The Forgiveness Instinct. Early on the morning of October, 26, 2001, 25-year-old Chante Mallard was driving home along Interstate 820, just southeast of Fort Worth, Texas, after a long night of partying. 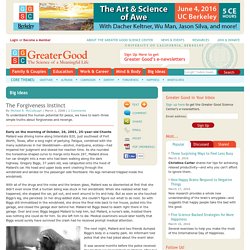 Fatigue, combined with the many substances in her bloodstream—alcohol, marijuana, ecstasy—had impaired her judgment and slowed her reaction time. As she rounded the horseshoe-shaped curve to merge onto Route 287, Mallard drove her car straight into a man who had been walking along the dark highway. Gregory Biggs, 37 years old, was catapulted onto the hood of Mallard’s car. His head and upper body went crashing through the windshield and landed on the passenger side floorboard. His legs remained trapped inside the windshield. With all of the drugs and the noise and the broken glass, Mallard was so disoriented at first that she didn’t even know that a human being was stuck in her windshield. What Forgiveness Means.

Vulnerability. Guilt. Self-Compassion. Trust. Apology. Temperance. Forgiveness Practice. How to Practice Forgiving Yourself. How to Forgive Yourself and Why It’s Important. You made a mistake. 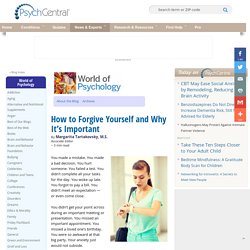 You made a bad decision. You hurt someone. How Forgiveness Changes a Person. Forgiveness is often prescribed as a remedy for healing from a traumatic experience. 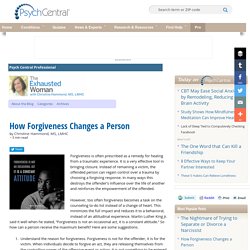 It is a very effective tool in bringing closure. Instead of remaining a victim, the offended person can regain control over a trauma by choosing a forgiving response.

Forgiveness. 40 Quotes that Will Quiet Your Mind. Post written by: Angel Chernoff Peace does not mean to be in a place where there is no noise, trouble, or hard work. 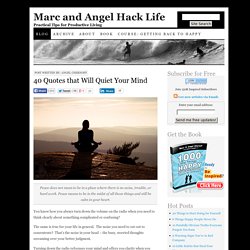 Peace means to be in the midst of all those things and still be calm in your heart. You know how you always turn down the volume on the radio when you need to think clearly about something complicated or confusing? The same is true for your life in general. The noise you need to cut out to concentrate? Turning down the radio refocuses your mind and offers you clarity when you need it most. The Art of Apologizing. Apologizing is hard. 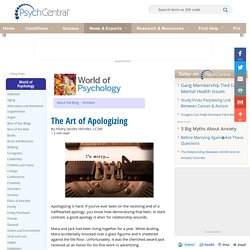 If you’ve ever been on the receiving end of a halfhearted apology, you know how demoralizing that feels. In stark contrast, a good apology is elixir for relationship wounds. Mara and Jack had been living together for a year.