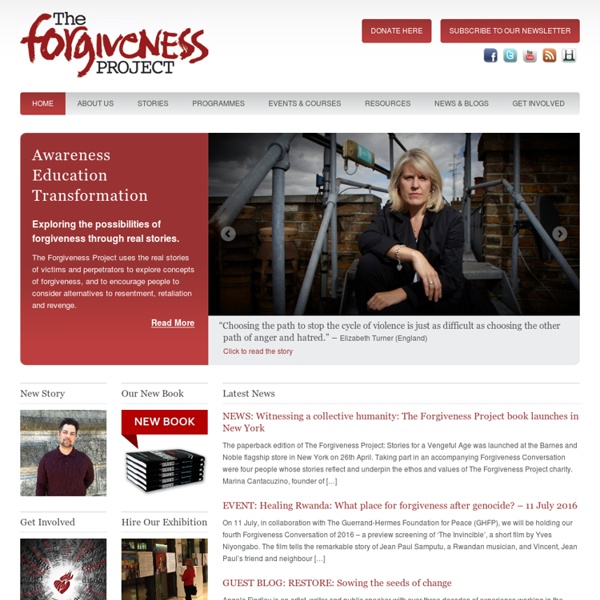 Peacemaker Violence Prevention Lesson Plans and Education K-12 The PeaceMakers curriculum is a proven-effective K-12 public school-based program developed by the FreeWay Project in 1996. It has been field-tested in hundreds of Missouri classrooms. The curriculum is based on the concept that violence begins with attitudes of mind, progresses through angry speech, and results in hostile actions. It uses dozens of interactive games and activities to teach students to speak courteously and treat others politely, with dignity and respect . . . the same way they would like to be spoken to and treated. The Peace Wheel - Culture There are many ways each and every one of us can be part of the peace movement. You don't need to make radical life changes in order to affect change in the world. Look at the following eight pathways, which one speaks to you?

Random Acts of Kindness – Cygnus Review Thank you, from the core of my heart, for your kind responses to my last email and for the support and healing which I can honestly say was deeply felt. We truly are ‘all for one and one for all’. Now that we are building this Ark of Love together though, we are going to need to gather some tools! The Cygnus team and I are interested to know what you have found helps you to remember your connection to love. I was originally going to ask what helps you to reconnect to love but I don’t believe that we are ever disconnected from It … we just sometimes forget that we are connected … we’ve only to put the phone back to our ear if we want to continue the conversation with our heart, with each other, with the Divine Love.

Counterterrorism and the English Language The New York Times is finally calling torture by its name. Why did it wait so long? Alex Torrenegra/Flickr The announcement that the New York Times will now refer to Bush Administration torture by its proper name is welcome news, tempered only by Executive Editor Dean Baquet's unfortunate attempt to rationalize the old policy. The Corner On Character: A Culture Of Kindness Bullying. There, I said it. It's a hard topic to grab hold of, and an even more difficult issue to handle and curtail. Let's face it; kids can be cruel. People can be cruel. Does Language Influence our View of the World? We use language to describe our subjective perception of the world. If I say “I feel cold”, then I use language to describe how I feel. This is nothing new.

Ways to share smiles Have you ever been on a train that has been delayed by several hours, or crammed full of people with every seat taken and people standing at the ends of the carriages? or Have you ever been in a busy train station at rush hour? The Future of the City Is Childless Read: The Steady Destruction of America’s Cities New York is the poster child of this urban renaissance. But as the city has attracted more wealth, housing prices have soared alongside the skyscrapers, and young families have found staying put with school-age children more difficult. 7 Proven Tactics to Spread Joy Around the World Does it not feel wonderful to be the catalyst that activates the pay it forward system? What is paying it forward? For those of you who don’t know — it is when you perform an act of kindheartedness with no need for reward, the receiver of that action then pays it forward to someone else. “When you do things from your soul, you feel a river moving in you, a joy.” ― Rumi This creates a cycle of goodwill that can, hopefully, snowball — spreading out into the world at large. Do you feel like starting an avalanche of joy today?

Elizabeth Warren's GOP Past Could Help Her in 2020 The question for her, then, is whether she’s willing to try turning a weakness into a strength by dusting off a piece of her past and making it not merely a whispered admission, but a central part of the story she tells voters. Yes, I was a Republican, and this is why I’m not anymore. Warren’s reluctance so far suggests she thinks that chapter is something to apologize for. Perhaps she should embrace it instead. The conservative streak that Katrina Cochran remembers was still with Warren when, in the early 1980s, the young law professor made the biggest jump of her fledgling academic career and moved from the University of Houston to the larger and more prestigious UT Austin.

Why Empathy is Important You can actually see the difference in the brain. Empathy lights up the insula, which is an area of the brain that connects the flow of information between the front of the brain and the emotional areas, whereas compassion sees many of the same areas lit but with the addition of the prefrontal cortex (left side), which is the area above the eyes that is involved in decision making. US President Barack Obama spoke of the need to fill the ‘empathy deficit’ in the world. On 11th August 2006, he said, “You know, there’s a lot of talk in this country about the federal deficit. But I think we should talk more about our empathy deficit – the ability to put ourselves in someone else’s shoes; to see the world through the eyes of those who are different from us – the child who’s hungry, the steelworker who’s been laid-off, the family who lost the entire life they built together when the storm came to town.

Take a Test On the next page you'll be asked to select an Implicit Association Test (IAT) from a list of possible topics . We will also ask you (optionally) to report your attitudes or beliefs about these topics and provide some information about yourself. We ask these questions because the IAT can be more valuable if you also describe your own self-understanding of the attitude or stereotype that the IAT measures. We would also like to compare differences between people and groups.