« Exercise takes a lot of time only in our explanations of why we're not doing it. » Laura Vanderkam

New Report Shows Promising Trend in People's Exercise Habits. If people across the United States could collectively give each other a fist bump, high five, or pat one another on the back for achieving recommended weekly exercise guidelines, now would be the time. 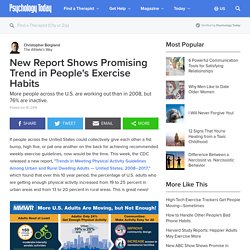 10 Neurological Benefits of Exercise. Perhaps you have a rough idea about how exercise affects your health, weight, and energy levels. 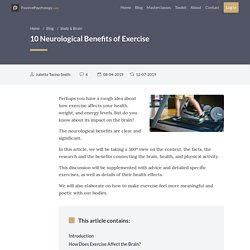 But do you know about its impact on the brain? The neurological benefits are clear and significant. In this article, we will be taking a 360° view on the context, the facts, the research and the benefits connecting the brain, health, and physical activity. This discussion will be supplemented with advice and detailed specific exercises, as well as details of their health effects. We will also elaborate on how to make exercise feel more meaningful and poetic with our bodies. Introduction Industrialization brought revolutionary technological innovations like trains, cars, and airplanes, which made our lives easier. In the aftermath of the Industrial Revolution, technology also experienced a major shift in the UK and much of Western Europe. “brought about a leisure revolution within the working-class population and played a major role in focusing the Victorian psyche on health.” These are: The results? High Levels of Exercise May Be OK for Middle-Aged Hearts. Most middle-aged men who participate in high levels of vigorous aerobic exercise every week are not damaging their hearts or increasing mortality risk, according to recent findings of a decades-long study. 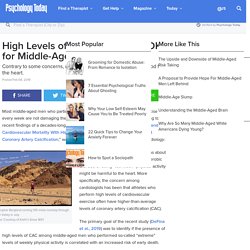 This paper, “Association of All-Cause and Cardiovascular Mortality With High Levels of Physical Activity and Concurrent Coronary Artery Calcification,” was published online January 30 in JAMA Cardiology. Christopher Bergland running 135-miles nonstop through Death Valley in July. Source: Courtesy of Kiehl's Since 1851 Previous research has raised questions about whether or not extreme amounts of aerobic exercise or doing “too much” physical activity might be harmful to the heart. More specifically, the concern among cardiologists has been that athletes who perform high levels of cardiovascular exercise often have higher-than-average levels of coronary artery calcification (CAC).

New Research Explains Why Some of Us Really Hate to Exercise. Hunter-gatherer Ancestry May Be Why Our Brains Need Exercise. Aerobic Exercise Has Clinically-Tested Antidepressant Powers. A recent systematic review of randomized clinical trials indicates that aerobic exercise has significantly large antidepressant treatment effects for patients with clinical depression. 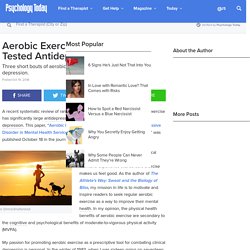 This paper, “Aerobic Exercise for Adult Patients with Major Depressive Disorder in Mental Health Services: A Systematic Review and Meta‐Analysis,” was published October 18 in the journal Depression and Anxiety. Source: Dirima/Shutterstock Anyone who breaks a sweat via physical activity on a regular basis knows from first-hand experience that aerobic exercise makes us feel good. As the author of The Athlete’s Way: Sweat and the Biology of Bliss, my mission in life is to motivate and inspire readers to seek regular aerobic exercise as a way to improve their mental health. What to Think About During Exercise. By Leo Babauta A reader wrote to me and said he gets bored during running, which makes him want to just stop running. 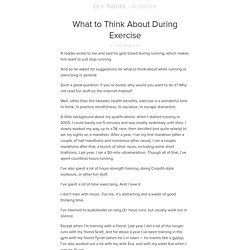 And so he asked for suggestions for what to think about while running or exercising in general. Such a great question: if you’re bored, why would you want to do it? Why not read fun stuff on the Internet instead? Well, other than the fantastic health benefits, exercise is a wonderful time to think, to practice mindfulness, to socialize, to escape distraction. A little background about my qualifications: when I started running in 2005, I could barely run 5 minutes and was mostly sedentary until then.