Why bananas as we know them might go extinct (again) They tasted better, they lasted longer, they were more resilient and didn't require artificial ripening. 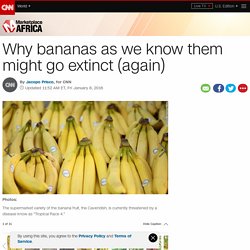 They were -- simply put -- a better fruit, because they belonged to a different species, or cultivar in banana parlance. That year, it was declared commercially extinct due to the Panama disease, a fungal disease that started out from Central America and quickly spread to most of the world's commercial banana plantations, leaving no other choice but to burn them down.

The banana industry was in deep crisis, and had to look for alternatives. It settled with the Cavendish cultivar, which was deemed an inferior product but carried the distinction of being immune to the disease. It was quickly adopted by banana growers worldwide. Here's what fruits and vegetables looked like before we domesticated them. Next time you bite into a slice of watermelon or a cob of corn, consider this: these familiar fruits and veggies didn't always look and taste this way. 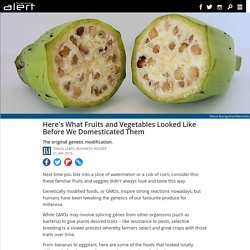 Genetically modified foods, or GMOs, inspire strong reactions nowadays, but humans have been tweaking the genetics of our favourite produce for millennia. While GMOs may involve splicing genes from other organisms (such as bacteria) to give plants desired traits – like resistance to pests, selective breeding is a slower process whereby farmers select and grow crops with those traits over time. Selective breeding of plants. The unnatural selection of plants with favourable traits to produce more disease-resistant plants with better quality and higher yield. 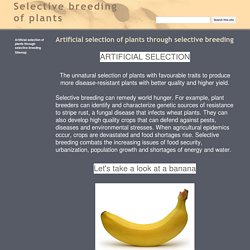 Selective breeding can remedy world hunger. For example, plant breeders can identify and characterize genetic sources of resistance to stripe rust, a fungal disease that infects wheat plants. They can also develop high quality crops that can defend against pests, diseases and environmental stresses. When agricultural epidemics occur, crops are devastated and food shortages rise. This is what a banana should look like: Here’s how much favourite fruit and veg has changed – The Irish Sun.

THE fruit and vegetables that grace our supermarket shelves today look drastically different to those enjoyed by our ancestors, research has revealed. 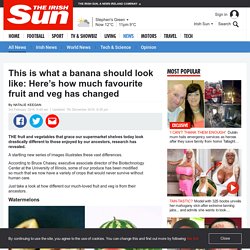 A startling new series of images illustrates these vast differences. According to Bruce Chasey, executive associate director of the Biotechnology Center at the University of Illinois, some of our produce has been modified so much that we now have a variety of crops that would never survive without human care. Just take a look at how different our much-loved fruit and veg is from their ancestors. Watermelons. The Biology of the Banana. The banana, also known as a plantain, is giant herbaceous plant native to the South Pacific. 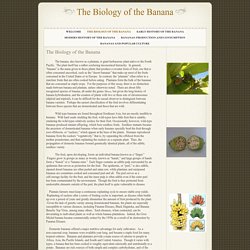 The plant itself has a rather confusing taxonomical hierarchy. In general, “banana” is the name given to those plants that produce a sweeter form of fruit, one that is often consumed uncooked, such as the “desert bananas” that make up most of the fruits consumed in the United States or in Europe. In contrast, the “plantain” often refers to a starchier fruits that are often cooked before eating.