The One Growth Hack Strategy That Sends 35,000 People Per Hour To Ello (The Latest Trendy Social Network) Growth hacking: hype or the holy grail for startups? Chamath Palihapitiya had screwed up. 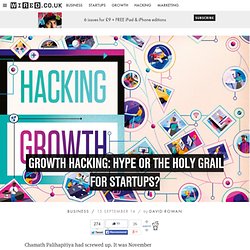 It was November 2007, and the executive in charge of Facebook's platform and monetisation had a full-blown crisis on his hands. Days earlier, he'd overseen the launch of what Facebook called "a completely new way of advertising online": an ad network known as Beacon that would post the commercial activities of Facebook users to their news feeds when on 44 third-party websites, unless they actively opted out. Palihapitiya, a rising star who'd run AOL's instant-messaging division and founded MyMusicChannel, had underestimated the resistance to Beacon: from furious users such as Sean Lane, whose wife learned of a surprise gift through a wall post that stated, "Sean Lane bought 14k White Gold 1/5ct Diamond Eternity Flower Ring from overstock.com", and who subsequently led a class action against Facebook; and from the 50,000 signatories in ten days to a MoveOn.org petition against the programme headed: "Facebook, stop invading my privacy! 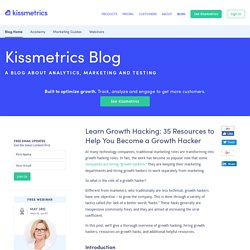 In fact, the work has become so popular now that some companies are hiring “growth hackers.” They are keeping their marketing departments and hiring growth hackers to work separately from marketing. So what is the role of a growth hacker? Different from marketers, who traditionally are less technical, growth hackers have one objective – to grow the company. This is done through a variety of tactics called (for lack of a better word) “hacks.” In this post, we’ll give a thorough overview of growth hacking, hiring growth hackers, resources on growth hacks, and additional helpful resources. Introduction 1. 2. 3. 4. 5. 6. 7. 8.

Bonus! What Growth Hacking Means for the Content Marketer. We all know how important content marketing is becoming. 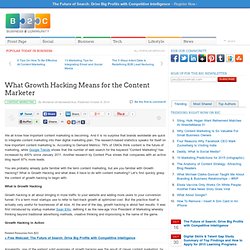 And it is no surprise that brands worldwide are quick to integrate content marketing into their digital marketing plan. The research-based statistics speaks for itself on how important content marketing is. According to Demand Metrics: 78% of CMOs think content is the future of marketing, while Google Trends shows that the number of web search for the keyword “Content Marketing” has increased by 400% since January 2011. Another research by Content Plus shows that companies with an active blog report 97% more leads. You are probably already quite familiar with the term content marketing, but are you familiar with Growth Hacking? What is Growth Hacking Growth hacking is all about bringing in more traffic to your website and adding more users to your conversion funnel.

Growth Hacking in Action Related Resources from B2C» Free Webcast: The Future of Search: Drive Big Profits with Competitive Intelligence img credit: marsdd.com P. These 3 Growth Hacking Strategies Are So Simple, But So Rare. Au service de la croissance de votre Startup. The 10 Best Ways to Generate Traffic Without Google. Having a mix of trophy and long-tail phrases ranking in Google search engine results pages (SERPs) is the equivalent of manna from heaven to any online business.

There's nothing better, if you have it, and nothing worse, if you lose it. More than one business has suffered collateral (sometimes fatal) damage in the wake of a Google algorithm update. Thousands more are certain to suffer a similar fate in the future. The reality is that most small companies will never rank well in Google and are wasting their time focusing on SERPs alone. The days of David beating Goliath in organic search are numbered, at best, and in most cases, nothing but a memory. If you don't have the budget to create content and build backlinks better than your competitors, you will not outrank them.

Rather than worry about losing or never having Google organic search traffic, plan for it. Here are the 10 best ways to generate traffic without Google. 1. Is Growth Hacking Marketing? It’s no secret that Airbnb is a kickass company — and it’s not because of some multi-million dollar branding budget. 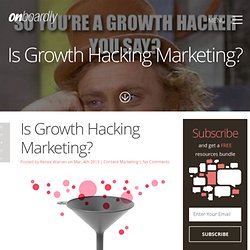 It’s because their marketing team has some serious next-level hustle going on. Case in point: what they did with Craigslist. Now that is some inventive shit. “They’ve picked a platform with 10s of millions of users where relatively few automated tools exist, and have created a great experience to share your Airbnb listing,” wrote Andrew Chen in his personal blog.

“It’s integrated simply and deeply into the product and is one of the most impressive ad-hoc integrations I’ve seen in years.” Whose Crazy Idea Was That? The easy answer: growth hackers — the new unsung heroes of Silicon Valley. “Certainly, a traditional marketer would not have come up with this, or known it was even possible — instead it’d take a marketing-minded engineer to dissect the product and build an integration this smooth,” Chen said. 4-unbeatable-growth-hacking-strategies-for-startups.