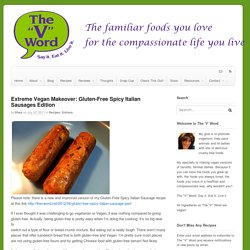 Actually, being gluten-free is pretty easy when I’m doing the cooking. It’s no big deal to switch out a type of flour or bread crumb mixture. But eating out is really tough. There aren’t many places that offer sandwich bread that is both gluten-free and Vegan. Truffled Mushroom Risotto [Vegan, Gluten-Free] Whether you're looking for an indulgent celebratory meal (hello, Valentine's Day), or just a cozy, stay-home-in-your-PJ's dish, look no further. 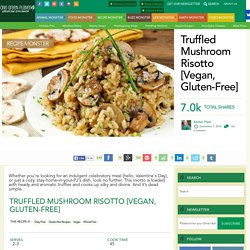 Lemon Meringue Pie [Vegan] Lemon meringue pie, made vegan! What was once the equivalent of the Holy Grail to most plant-based pie bakers is now easily within reach, thanks to the winning combination of tofu and aquafaba! This pie is the perfect combination of sweet and tart, and it's sure to be a hit at family gatherings or with just you and a special someone on a Sunday afternoon. Lemon Meringue Pie [Vegan] Ingredients Crust: 1 vegan graham cracker crust, homemade or store-bought Filling: 1 package of extra-firm silken tofu (pressed for 30 minutes-1 hour)5 tablespoons agave1/4 teaspoon turmeric (for color)Juice from one large lemon (about 3 tablespoons)1 tablespoon coconut oil1 tablespoon cashew milk Meringue: 2 teaspoons cream of tartar1/2 teaspoon vanilla extractAquafaba (liquid from a can of chickpeas)1 cup powdered sugar Preparation. 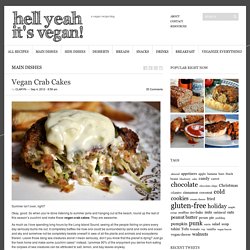 Okay, good. So when you’re done listening to summer jams and hanging out at the beach, round up the last of this season’s zucchini and make these vegan crab cakes. They are awesome. As much as I love spending long hours by the Long Island Sound, seeing all the people fishing on piers every day seriously bums me out. It completely baffles me how one could be surrounded by sand and rocks and ocean and sky and somehow not be completely beside oneself in awe of all the plants and animals and ecosystems therein. For optimal texture, be sure to let the zucchini sweat as long as possible, and then squeeze out as much liquid as you can. 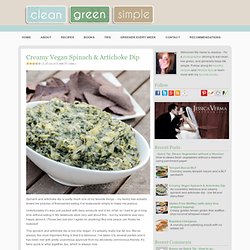 Unfortunately it’s also just packed with dairy products and a ton of fat, so I had to go a long time without eating it. My tastebuds were very sad about this…but my waistline was very happy about it. (Those two just don’t agree on anything) But now peace can finally be restored! This spinach and artichoke dip is not only vegan, it’s actually really low fat, too. But as always, the most important thing is that it is delicious. Chop up some artichoke hearts pretty fine (I use the canned kind, make sure they are in water, not oil! In a large skillet over medium heat, sauté onions, spinach and artichoke until the spinach is nice and wilty and the onions are translucent or lightly browned. 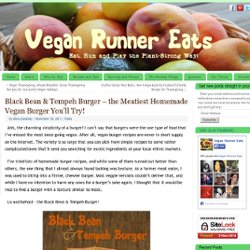 I can’t say that burgers were the one type of food that I’ve missed the most since going vegan. After all, vegan burger recipes are never in short supply on the internet. The variety is so large that you can pick from simple recipes to some rather complicated ones that’ll send you searching for exotic ingredients at your local ethnic markets. I’ve tried lots of homemade burger recipes, and while some of them turned out better than others, the one thing that I almost always found lacking was texture.

As a former meat eater, I was used to biting into a firmer, chewier burger. Lo and behold – the Black Bean & Tempeh Burger! Okay, I know that it’s hard to impress any vegan person with a black bean burger these days… but hear me out: this burger gets its chewy, absolutely not mushy texture from a combination of black beans, brown rice, and shredded tempeh! No animals were harmed in the production of these burger patties Ingredients Instructions.