Problem-Based Learning Strategy in E-learning Courses. What is problem-based learning? 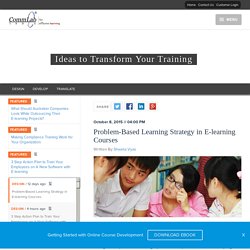 Problem-based learning is learner-centered learning theory, where the learner learns through the experience of solving a problem. It helps the learner to develop logical thinking and enhance domain knowledge. It is a form of active learning where the learner is encouraged to construct his or her knowledge by dealing with real-life situations to solve. This type of learning makes the learner to develop active problem-solving skills, acquire essential motivation, exchange ideas and at the same time collaborate with others in order to arrive at a mutually beneficial solution. The sense of collaboration helps learners to identify what they already know, what they need to know, and different ways and methods of arriving at the solution of the problem. Key Principles of Problem-Based Learning: Active learning: Learners are free to control their own learning process, and are capable of finding answers to their questions.

Why Kids Should Make the Video Games They Love to Play. When educator Lynn Koresh hears from kids that they want a career doing something with computers, she asks, “To do what with computers?” 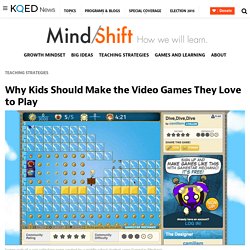 Adults often encourage kids to pursue science, technology, engineering and math (STEM) skills, and computing classes are usually a first stop. But Koresh knows it’s the real-world applications of computational thinking and coding language skills that bring such knowledge to life. She reasoned that most middle school students are already playing video games and might respond well to a unit on how to design, create, test and promote video games. Along the way, she’s also teaching them about digital citizenship and entrepreneurship. “I wanted to give kids exposure to what it means to have a career using computers,” said Koresh, technology coordinator at Edgewood Campus School in Madison, Wisconsin. She gave students the task of designing a game using Gamestar Mechanic.

As students develop their games, they test them on one another throughout the semester. Excellent Strategy Games to Teach Kids Logical Thinking #edtechbc. July 31, 2015 Strategy games are ideal for helping kids develop logico-mathematical skills that emphasize problem solving and strategic planning. 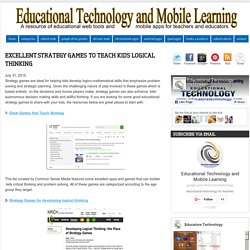 Given the challenging nature of play involved in these games which is based entirely on the decisions and moves players make, strategy games can also enhance kids’ autonomous decision making skills and skillful thinking. Etiquette for Kids in the Digital Age. Via CyberWise.org Etiquette is a code of behavior that defines expectations for social behavior. 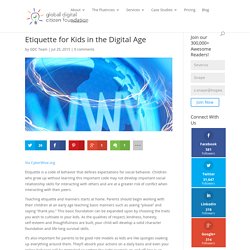 Children who grow up without learning this important code may not develop important social relationship skills for interacting with others and are at a greater risk of conflict when interacting with their peers. Teaching etiquette and manners starts at home. Parents should begin working with their children at an early age teaching basic manners such as asking “please” and saying “thank you.” This basic foundation can be expanded upon by choosing the traits you wish to cultivate in your kids.

It’s also important for parents to be good role models as kids are like sponges soaking up everything around them. Etiquette Guidelines – Behavior when communicating on the Internet also known as Netiquette: Respect – Stress the importance of treating others the same way they like to be treated – being polite will develop your child’s relationship building skills. Microsoft Released A New Website to Help Teachers Use Minecraft in Their Classes #edtechbc.

July 10, 2015 Minecraft is an immersive learning environment that has started as a game about creating, exploring and managing resources before it becomes one of the leading educational learning platforms for students. 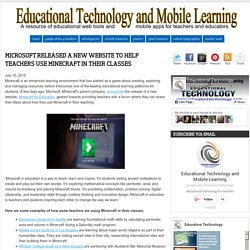 A few days ago, Microsoft, Minecraft’s parent company, announced the release of a new website, Minecraft for Education, geared towards providing teachers with a forum where they can share their ideas about how they use Minecraft in their teaching. ‘Minecraft in education is a way to teach, learn and inspire. It’s students visiting ancient civilizations to create and play out their own stories. Insights: Create paperless fun interactive lessons, get data on who played, how they performed #edtechbc. Play 2000+ Classic MS-DOS Games (Including Cross Country Canada) Online Or Download For Free #edtechbc. Also For Apple II, Macintosh, Windows, Windows 3.x Developed by MECC Published by MECC Released 1990 Pacing Real-Time Perspective Bird's-eye view, Side view, Text-based / Spreadsheet, Top-down Educational Geography, History Genre Educational, Simulation Setting Western Interface Text Parser Gameplay Managerial / Business Simulation Visual Fixed / Flip-screen Description As a covered wagon party of pioneers, you head out west from Independence, Missouri to the Willamette River and valley in... favoritefavoritefavoritefavorite ( 325 reviews ) Click here for the manual. 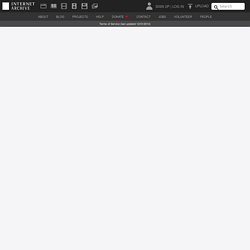 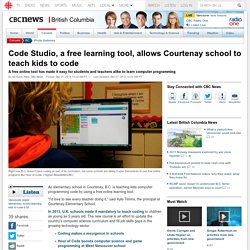 "I'd love to see every teacher doing it," said Kyle Timms, the principal at Courtenay Elementary School. In 2013, U.K. schools made it mandatory to teach coding to children as young as 5 years old. The new course is an effort to update the country's computer science curriculum and fill job skills gaps in the growing technology sector.

Coding is not currently in the B.C. curriculum, but a new curriculum is in development. Timms said his school's new program started last year when one of the teachers tried out a free online program called Hour of Code with her Grade 4/5 class. "She had a lot of success, the kids were really engaged," said Timms. PYONKEE: Free iApp for Teaching Kids To Code #edtechbc #cuebc. March 20, 2015 Pyonkee is a powerful iPad app for teaching kids and adults about coding. 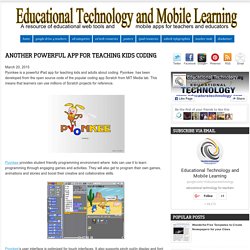 Pyonkee has been developed from the open source code of the popular coding app Scratch from MIT Media lab. This means that learners can use millions of Scratch projects for reference. Pyonkee provides student friendly programming environment where kids can use it to learn programming through engaging games and activities. They will also get to program their own games, animations and stories and boost their creative and collaborative skills.

9 Video Game Heroines to Inspire Your Daughter. Things are getting better for women in film and TV, from Divergent's Tris to Frozen''s supersisters Anna and Elsa. 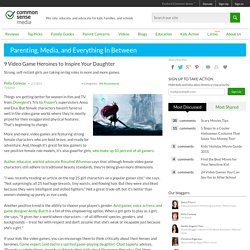 But female characters haven’t fared so well in the video game world, where they're mostly prized for their exaggerated physical features. Free Interactive Tools For Math, LA, Science, Etc Which Can Be Embedded In A Web Page #edtechbc. Okay, so if a picture is worth a thousand words, how many words is an animated interactive teaching and learning tool worth? 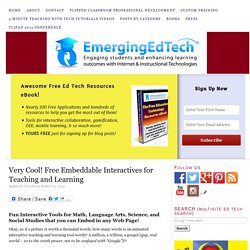 A million, a trillion, a googol (yup, real world – 10 to the 100th power, not to be confused with “Google”)!? Well, that’s a question that can be debated endlessly, but here one that has a straightforward answer: Is there a source of fun digital interactives for teaching and learning that I can easily use with Interactive White Boards and other digital systems? The answer is “Yes!” Gynzy offers 50 of them for free! 10 Free Math Games Your Kids Should Be Playing ... YouTube Is Releasing An App For Kids #edtechbc. YouTube Is Releasing An App For Kids by TeachThought Staff Both USA Today and The Verge are reporting that YouTube will be releasing a first-party app for kids at the Kidscreen Summit event on February 23.

And at least at the beginning, it’s spurning rival-iOS and going Android-only. It’s not surprising that Google-owned YouTube is releasing an app designed for engagement by those still developing their decision-making skills and capacity for self-restraint. Among the features are removal of comments, safer search, a way to control viewing time, and even original content for children. We’ve long held that YouTube is one of the best-kept secrets in teaching and learning–in lieu of its ample underbelly. If we loved Smarter Every Day, we’d explode. In fact, there’s so much great content that it’s easy to miss, especially if you already have your mind made up about the “garbage” on YouTube. We’d guess iOS users can expect a version later this summer. Getting Started with Gamification. Angry Birds By CUE Member Alice Keeler Gamification – what made me venture into the world of games as a teacher?

One day I had a struggling student eagerly bring me his math homework and exclaim, “What is my grade?” Well… the student had not done any homework the whole year, failed every test and one homework assignment was not going change that F grade. All I could do was give the student a weak smile; the student left feeling dejected and unmotivated to do his homework again. Teaching in the Age of Minecraft. Like many 11-year-olds in Texas, Ethan had to build a model of the Alamo as a school project. Often, students make their dioramas out of paper mache or popsicle sticks, but Ethan’s teacher gave him permission to build his project in Minecraft, the popular sandbox software game in which players build structures out of blocks. With his dad’s help, Ethan recorded a video tour of his scale model of the fort, complete with explanatory signs, and posted it on YouTube. A few minutes into the tour, it started raining unexpectedly over Ethan’s diorama, but Ethan noted, "This is exactly what happened during the battle of the Alamo—it rained.

" To his dad—and, presumably, his teacher—this comment revealed Ethan’s familiarity and knowledge with the subject matter that he might not have had otherwise shown. With more than 18 million downloads to date, Minecraft is the best-selling computer game of all time; the game’s free-form structure has made it popular with kids and adults alike. Will drones take STEM programs to new heights? Dive Brief: 3D Robotics, which calls itself North America’s largest personal drone company, has started a program offering free and discounted unmanned aircraft and autopilot technology for college and university science, technology, engineering, and math programs.

The Berkeley, CA, company will also provide classroom support and promotional opportunities to the higher ed STEM programs using drones. Putting unmanned aircraft in the hands of future innovators will help develop the drone technology for industries, applications, and research opportunities that were previously unheard of. Dive Insight: No-Tech Board Games That Teach Coding Skills to Young Children. By Matthew Farber Thanks in part to STEM education initiatives and the tech boom, coding in the classroom has become more ubiquitous.

Computer programming tasks students to persistently work to solve problems by thinking logically. What’s more, learning how to code is a desired 21st century career skill. There are several digital games designed for kids as young as 5 that turn coding into a fun activity, such as Kodable and Scratch Jr. But some game designers are going further back to programming’s fundamentals by creating physical games that can’t be found in any app store. One tabletop game is Code Monkey Island. Gamification: A Better Way of Reaching Online Learners. Future Of EdTech 101: Automation, Curation And Gamification. Screen Time That’s V... Creating Effective ELearning For Kids. Any seasoned instructional designer will tell you that elearning development cannot be approached in the same manner across multiple courses – even if the content is identical.

The ultimate deciding factor in how content is presented always comes down to the target audience. Tailoring course content for the audience is one of the more difficult parts of course creation. While you may be able to accurately define the target audience, there are always sub-groups within that you should consider as well. These sub-groups come with different backgrounds and experiences. So Your Kids Just Got A New Device - Now What? Best First Kids' Apps.