Twist on ‘survival of the fittest’ could explain how reality emerges from the quantum haze. How does our predictable everyday world emerge from the hazy, probabilistic rules of quantum mechanics? 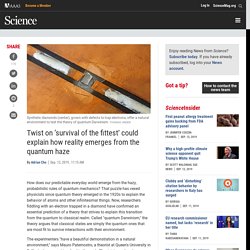 That puzzle has vexed physicists since quantum theory emerged in the 1920s to explain the behavior of atoms and other infinitesimal things. Now, researchers fiddling with an electron trapped in a diamond have confirmed an essential prediction of a theory that strives to explain this transition from the quantum to classical realm. Called "quantum Darwinism," the theory argues that classical states are simply the quantum ones that are most fit to survive interactions with their environment. The experimenters "have a beautiful demonstration in a natural environment," says Mauro Paternostro, a theorist at Queen's University in Belfast who was not involved in the work. Physicists caution, however, that the new study is far from the final word on the matter. Atomic-scale objects behave differently from larger ones. Quantum Darwinism claims the truth is more subtle. Is this “one of the worst scientific scandals of all time”?

In February of this year, a critical review in the Journal of Health Psychology prompted one of its editors to publish open letters calling for a formal investigation of one of the most influential and heavily cited psychologists of all time, the oft controversial Hans Eysenck. 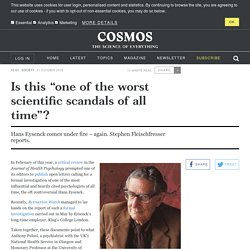 Recently, Retraction Watch managed to lay hands on the report of such a formal investigation carried out in May by Eysenck’s long-time employer, King’s College London. Taken together, these documents point to what Anthony Pelosi, a psychiatrist with the UK’s National Health Service in Glasgow and Honorary Professor at the University of Glasgow, calls “one of the worst scientific scandals of all time.” Eysenck is revered as one of the greatest psychologists in history, his fame built on his work concerning intelligence and personality testing, known as psychometrics. Yet his career has, for many decades, been dogged by controversy. It wasn't the smoking that was killing you, it was your supressed rage. 100+ STEM Websites & Webtools for Teachers. STEAM Teaching Resources for Educators. It’s hard to remember a time when STEM fields – that’s science, technology, engineering, and math – weren’t the top priority in education. 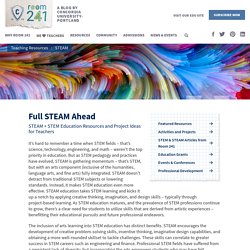 But as STEM pedagogy and practices have evolved, STEAM is gathering momentum – that’s STEM, but with an arts component (inclusive of the humanities, language arts, and fine arts) fully integrated. STEAM doesn’t detract from traditional STEM subjects or lowering standards. Instead, it makes STEM education even more effective. STEAM education takes STEM learning and kicks it up a notch by applying creative thinking, imagination, and design skills – typically through project-based learning. As STEM education matures, and the prevalence of STEM professions continue to grow, there’s a clear need for students to utilize skills that are derived from artistic experiences – benefitting their educational pursuits and future professional endeavors. The inclusion of arts learning into STEM education has distinct benefits. Differentiating with Area and Perimeter.

Being on Spring Break sure does have its upsides doesn't it?! 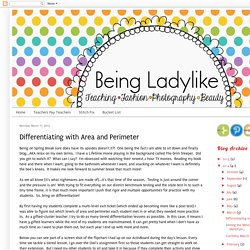 One being the fact I am able to sit down and finally blog...AKA relax on my own terms. I have a Lifetime movie playing in the background called The Grim Sleeper. Did you get to watch it? What can I say? I'm obsessed with watching their newest 2 hour TV movies. As we all know (it's what nightmares are made of)...it's that time of the season. By first having my students complete a multi-level exit ticket (which ended up becoming more like a post test) I was able to figure out which levels of area and perimeter each student met in or what they needed more practice in. Below you can see part of a screen shot of the flipchart I had up on our ActivBoard during the day's lesson.