Fried Chicken Recipe - Bon Appétit Recipe. Duck ‘in Salsa’ with Radicchio (Anatra in Salsa con Radicchio di Treviso) There are so many food blogs out there that it is hard to find the really good ones. 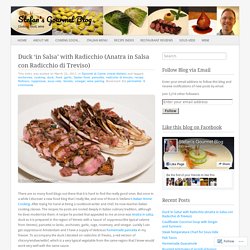 But once in a while I discover a new food blog that I really like, and one of those is Stefano’s Italian Home Cooking. After trying his hand at being a cookbook writer and chef, he now teaches Italian cooking classes. The recipes he posts are rooted deeply in Italian culinary tradition, although he does modernize them. A recipe he posted that appealed to me at once was Anatra in salsa, duck as it is prepared in the region of Veneto with a ‘sauce’ of soppressa (the typical salame from Veneto), pancetta or lardo, anchovies, garlic, sage, rosemary, and vinegar. Chicken, red pepper & almond traybake. Rabbit in Piquant Sauce, Stovetop Braised or Sous-Vide (Coniglio in Salsa Piccante) 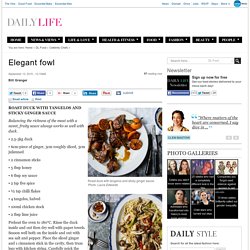 Photo: Laura Edwards Balancing the richness of the meat with a sweet, fruity sauce always works so well with duck. Chicken. How to cook the perfect paella. Some dishes are a victim of their own success. 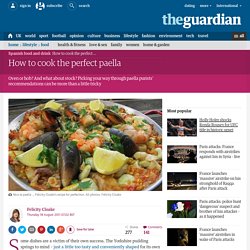 The Yorkshire pudding springs to mind – just a little too tasty and conveniently shaped for its own good; the Scotch egg suffers from a similar problem. One of the saddest examples is the brave paella. As Catalan author Josep Pla put it, the "abuses" committed against Spain's most famous dish are "excessive – an authentic scandal". It's little things like Keith Floyd's quick-cook rice, as much as any outrageous Thai "twist" or Caribbean pineapple garnish, which offend the sensibilities of Valencians who claim the dish as their birthright. Jenny Chandler reports in The Real Taste of Spain that shoppers in Valencia's Mercat Central could be persuaded to agree on only thing – fish and shellfish are "absolutely out of the question".

Rice is a tricksy ingredient and, just like risotto, certain rules must be observed to achieve paella nirvana. C H E W I N G T H E F A T: Hot-and-Sticky Lemon-Pepper Chicken Wings adapted from Richard Blais in Food & Wine. A couple of years ago, I went on a Chicken Wing Diet. 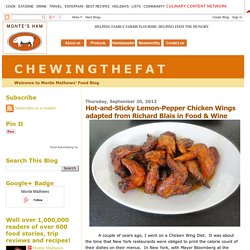 It was about the time that New York restaurants were obliged to print the calorie count of their dishes on their menus. In New York, with Mayor Bloomberg at the helm, we’ve gotten very used to the Nanny-state. And to tell the truth, it’s not all bad. How to cook the perfect chicken cacciatora. Pollo alla cacciatora, or hunter's chicken, is such a stalwart of the traditional Italian restaurant menu in this country that it wasn't until I came to write this piece that I paused to wonder why anyone, Fantastic Mr Fox aside, would go out hunting and come back with a chicken. 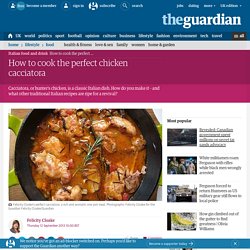 Jamie Oliver reckons it's "obviously the type of food that a hunter's wife cooks for her fella [!] When he gets back from a hard morning spent in the countryside", but I suspect it's more likely to have been originally made with rabbit or game birds – the slow, gentle braise would be the ideal treatment for such tasty, but potentially dry and stringy, meats. As with so many Italian classics, arguing about the animal used is only the beginning. Roasted Garlic. Watercress Salad–Soup with Smoked Duck Breast and Ginger Serves 4 6 to 8 cups canned low–sodium chicken broth or Real Broth for a Too–Busy Cook (page 106) 2 garlic cloves, grated A 1-inch chunk fresh ginger, peeled 1 smoked duck breast (8 to 10 ounces), or 8 to 10 ounces cooked chicken, duck, or pork, shredded 3 bunches watercress, tough stems removed, rinsed and shaken dry Salt and freshly ground black pepper Roasted sesame oil or Chinese Many–Flavor Oil (page 52) for drizzling (optional) Heat the broth, fortifying it with the flavorings and bones, if desired. 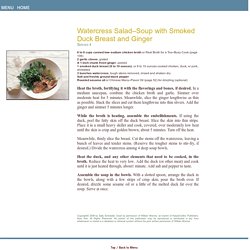 In a medium saucepan, combine the chicken broth and garlic. Simmer over moderate heat for 5 minutes. Meanwhile, slice the ginger lengthwise as thin as possible. While the broth is heating, assemble the embellishments. Meanwhile, thinly slice the breast. Heat the duck, and any other elements that need to be cooked, in the broth. Assemble the soup in the bowls. Copyright© 2006 by Sally Schneider. Bill Granger recipes: Our chef suggests a trio of chicken barbecue recipes that really sing. Skillet Rosemary Lemon Chicken - Life Made Sweeter. The Food Lab: Four Secrets to Improving Any Fried Chicken Recipe. 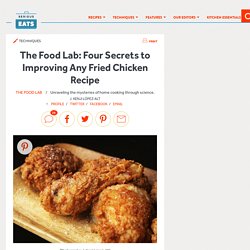 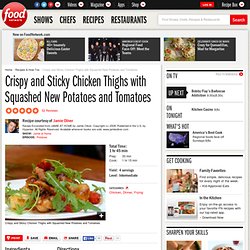 As everything cooks together in 1 dish, all the beautiful flavors get mixed up. French Fried Chicken recipe. It always amuses me to see recipe for things like French Chocolate Pancakes, French Crullers or a “French” Watermelon Cooler. 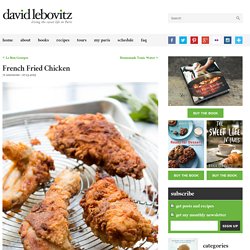 I guess adding the word “French” makes things seem more appealing…unless they’re using French chocolate or French watermelon, then they have the right to call it that, and I’ll allow it. But I remember the look on his face when I was trying to explain to my French (no quotation marks needed) other half, that green beans cut on the diagonal are called “French-cut” in America – even though I can’t say that I’ve ever seen green beans cut on the diagonal in France. 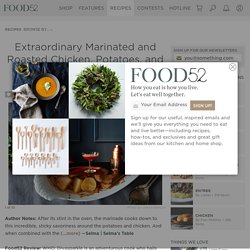 Find your friends who are already on Food52, and invite others who aren't to join. Let's GoLearn more Join Our Community Follow amazing home cooks. Collect recipes and articles. Sign Up. Thai Chicken and Eggplant Stir-Fried with Red Curry (Pad Phed Gai) The next dish in our High Heel Gourmet-inspired Thai feast was this simple but oh so tasty stir-fried chicken and eggplant with red curry paste. This was actually one of the tastiest Thai dishes I have prepared so far. The eggplant soaks up the curry flavor and it all works beautifully together. Making our own Thai curry paste from scratch really paid off with this recipe.

The Kaeng Pa curry paste used in this recipe is enriched with cumin and coriander. Kimchi Marinated Chicken/Pork. Caramelized Lemon. Chicken Marsala - David Lebovitz. Who knew I (or more to the point, Paris) was so ahead of the curve? Last year, when I wrote about the preponderance of purple populating Paris, a few readers pointed out that the color orchid was named The Color of the Year by tastemakers, Pantone. And recently, I made Marsala-baked pears, only to find out that, yup – this year, Marsala is the color of the year. So if you’re interested in finding out what the color of the year is going to be for next year, keep an eye on this blog. The other night I invited some friends over for a very “family style” dinner. Tips & Tricks: Best Way to Truss a Chicken.