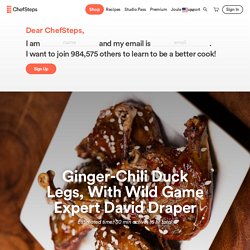 An avid hunter and accomplished writer, Draper is the editor-in-chief of Petersen’s Hunting magazine. Draper has traveled the globe in search of good stories and good food, yet his roots remain firmly planted in the soil of his family’s farm on the High Plains of Nebraska. He also pens the Petersen’s Hunting magazine’s Fare Game column—covering all aspects of processing and cooking wild game—hosts Cook With Cabela’s, and is the former Wild Chef blogger for Field & Stream magazine. Crispy Duck with Port Wine Sauce Recipe. Easy Sous Vide Duck Breasts Recipe. B&W Artisan Pro. Duck Leg Confit Sous-Vide. Duck Fried Rice. I love recipes that use all parts of an ingredient. 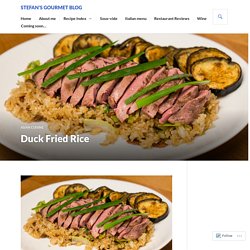 When I saw the recipe for deconstructed duck fried rice on Simon’s blog Stranded on the Island, which uses the duck breast, skin, and fat from the skin, I decided straight away to make it as soon as possible. Using the fat rendered from the skin to fry the rice is a great idea, as it gives the whole dish a nice flavor of duck. Duck Breast with Hoisin and Pancakes – Stefan's Gourmet Blog. Our friend Marjolein makes great Asian style food, and we really liked this variation on the well-known Peking duck that she prepared for us. 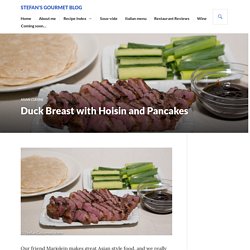 Usually Peking duck is all about the skin, but in Marjolein’s version it is all about the breast meat. She marinates it in hoisin sauce and garlic, and then cooks the duck breast in the oven. Slow Roast Duck Recipe on Food52. Partridge Sous-Vide with Its Own Jus, Deep Fried Salsify, and Parsley Root Puree – Stefan's Gourmet Blog. This is the appetizer I prepared for Christmas dinner. 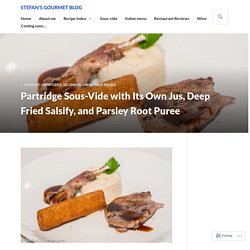 You could also serve it as a main course if you use a whole partridge per person. Partridge is similar to pheasant, but smaller and the meat is more juicy (pheasant can be quite dry). I prepared the breast fillet and legs separately, and used the remaining carcasses to make partridge jus. The partridge was served with deep fried salsify and a parsley root puree. Parsley root looks similar to parsnips, which you could use as a substitute. Ingredients. Duck in butter and wine sauce: Sounds fancy, but it’s super easy. 1 duck breast, about 8 ounces ½ teaspoon kosher salt ¼ tsp freshly cracked black pepper 1 tablespoon finely chopped shallots ½ cup dry red wine 2 tbsp unsalted butter, cut up Prep: 10 minutes; cook: 28 minutes 1. 2. 3. 4. 5. 6. 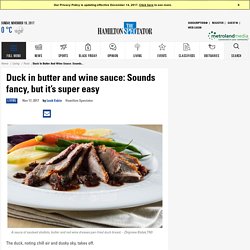 Chicago Tribune. Raymond Blanc reveals exactly how to make his signature dish. A Recipe for Grilled Poussins With Orange-Cumin Glaze. THERE IS something incontrovertibly festive about meat with a sweet sauce—turkey and cranberries, ham glazed in brown sugar and crowned with bright pineapple rings, port-glazed goose with a dried fruit reduction. 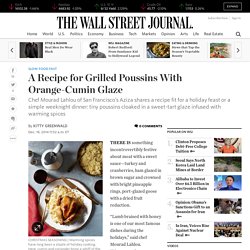 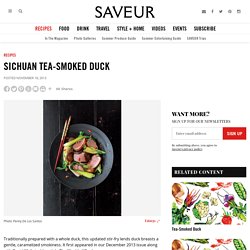 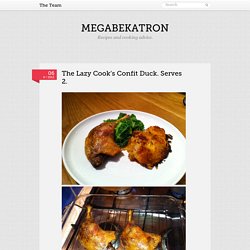 I hear you shout, ‘This takes three and a half hours, how is this lazy?’ Proper Confit Duck can take about a day to make as there is marinating overnight and slow cooking and blah blah blah. The real lazy/smart way is to buy a tin of duck confit (you can buy them in France, at Borough Market or on ebay for £7) and just pop them in the oven. Do treat yourself to this as they are delicious and are incredibly tender, more so than these, but this is the lazy version as you have to do practically nothing when they are in the oven. So a bit of time is needed to cook these, but very little effort. Duck Legs With Mushrooms. If you’re in a rut cooking chicken for dinner, try something new this weekend by trying out this easy recipe for roasted duck legs. 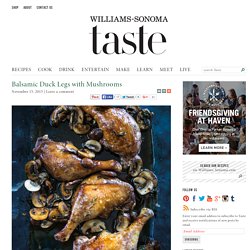 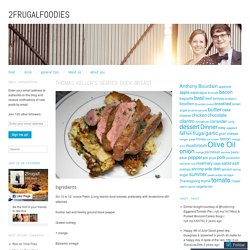 Add Feta Cheese To Your Brine For Delicious, Juicy Chicken. Usually, I tend to favour a dry brine over a wet one, but I might switch sides for a bit to try the Kitchn’s feta cheese brine, which requires only two ingredients: Feta (duh) and water.Photo by Rebecca Siegel. To make this cheesy, salty solution, you’ll need 125g of feta and 1L of water for every kilogram of chicken. Blend the cheese and water together in a food processor (or you could use a stick blender) until smooth and pour into a resealable bag with your chicken parts of choice. Throw it in the fridge for a night, and cook your bird using whatever method you favour. (If you don’t have a preferred method, The Kitchn has you covered in the link below.)