Choice page. Even a 10-Minute Walk May Be Good for the Brain. Ten minutes of mild, almost languorous exercise can immediately alter how certain parts of the brain communicate and coordinate with one another and improve memory function, according to an encouraging new neurological study. 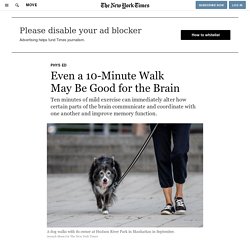 The findings suggest that exercise does not need to be prolonged or intense to benefit the brain and that the effects can begin far more quickly than many of us might expect. We already know that exercise can change our brains and minds. The evidence is extensive and growing. Multiple studies with mice and rats have found that when the animals run on wheels or treadmills, they develop more new brain cells than if they remain sedentary. Many of the new cells are clustered in the hippocampus, a portion of the brain that is essential for memory creation and storage. The active animals also perform better on tests of learning and memory. Equivalent experiments examining brain tissue are not possible in people. 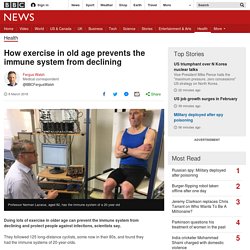 'Face yoga' just might reduce signs of ageing. Here's how it works - Health - ABC News. I begin the workout with a smile, as instructed. 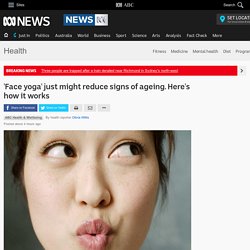 "Open your mouth and form a long 'O'. Fold your upper lip over your front teeth. Smile again to lift those cheek muscles up! " Mild cognitive impairment 'treatable' with regular exercise, say experts. Parkinson&apos;s disease progression can be slowed with vigorous exercise, study shows. His friends noticed the tremor before he did. 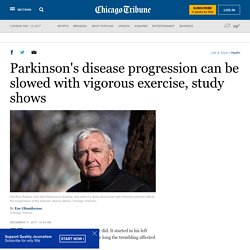 It started in his left hand, Geoffrey Rogers said, but before long the trembling affected his right too. The cause, doctors found, was Parkinson’s disease. At Rush University Medical Center, where Rogers, then 64, received a second opinion, the father of three learned he could join a new clinical trial for those with the neurodegenerative condition. A team of researchers at Northwestern Medicine and the University of Colorado School of Medicine wanted to find out whether high- or moderate-intensity exercise was safe for patients with Parkinson’s disease. Would it help with the disease’s symptoms, the progressive loss of muscle control, tremors, stiffness?

Five years later, those scientists have an answer: Yes. “The real question is: Is there any disease or any disorder for which exercise is not good?” About 1 million Americans live with Parkinson’s disease, according to the Parkinson’s Foundation, which funded the study. Twitter @essayolumhense. 10 Piriformis Stretches To Help You Get Rid Of Sciatica, Hip And Lower Back Pain. Hip and lower back pain can come as a result of an irritation of the sciatic nerve.

This pain can spread downwards and can affect the limbs and the feet. It is something many people suffer from, and the pain can affect your daily routine. The sciatic nerve is located deep in the buttock. Medscape Access. Caffeine, hydration and exercise performance - Coffee and Health. Metabolic and exercise endurance effects of coffee and caffeine ingestion. Caffeine and exercise: metabolism, endurance and performance. Stationary Bike Stand » Best THREE stationary bike stands for under $80! There are some truly great stationary bike trainers out there – we personally love the Kurt Kinetic Road Machine model – but for beginners and the more price-conscious shopper, we know there are a few of you out there looking for a great value bike stand. 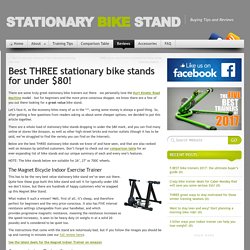 Let’s face it, as the economy bites many of us in the ***, saving some money is always a good thing. So, after getting a few questions from readers asking us about some cheaper options, we decided to put this article together. Hippocampal and Cerebral Blood Flow after Exercise Cessation in Master Athletes. Why Walking Helps Us Think. Study shows exercise won’t cause you to forget things - Vital Record. Research has found that exercise causes more new neurons to be formed in a critical brain region, and contrary to an earlier study, these new neurons do not cause the individual to forget old memories, according to research by Texas A&M College of Medicine scientists, in the Journal of Neuroscience. 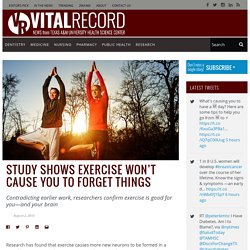 Exercise is well known for its cognitive benefits, thought to occur because it causes neurogenesis, or the creation of new neurons, in the hippocampus, which is a key brain region for learning, memory and mood regulation. Therefore, it was a surprise in 2014 when a research study, published in the journal Science, found that exercise caused mice to forget what they’d already learned. Why Walking Helps Us Think. Stopping Exercise Decreases Brain Blood Flow – Neuroscience News. Summary: Researchers report a significant decrease in cerebral blood flow after physically fit older adults stop exercising for a short period of time. 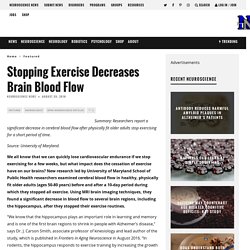 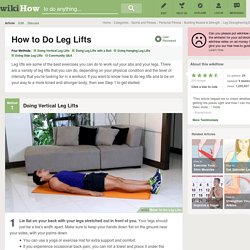