UiGradients - Beautiful coloured gradients. Naming Things. There are only two hard things in computer science: cache invalidation and naming things.Phil Karlton Being a professional web developer means taking responsibility for the code you write and ensuring it is comprehensible to others. 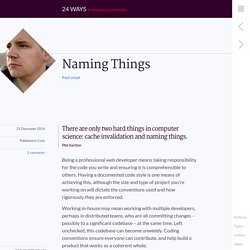 Having a documented code style is one means of achieving this, although the size and type of project you’re working on will dictate the conventions used and how rigorously they are enforced. Working in-house may mean working with multiple developers, perhaps in distributed teams, who are all committing changes – possibly to a significant codebase – at the same time. Left unchecked, this codebase can become unwieldy. Coding conventions ensure everyone can contribute, and help build a product that works as a coherent whole. Even on smaller projects, perhaps working within an agency or by yourself, at some point the resulting product will need to be handed over to a third party. Put simply, code is read more often than it is written or changed.

I know that: Short. 50 CSS Tools & Resources from 2014. Just as we published in December last year, today we have the 2014 edition of our 50 favorite CSS resources. 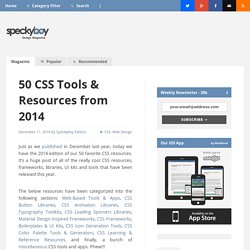 Phew!!! Here we go then… Responsive Images For Retina: Using HTML5’s srcset. This past Thursday saw the release of Apple’s new “Retina”-screen iMac, making it official: we are now in the world of desktop high-DPI screens. 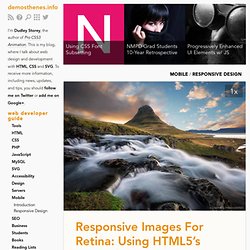 This makes the job of designers and developers doubly difficult, expanding an image quality problem that was previously confined to mobile devices and high-end laptops to one that will soon reach computers everywhere. Thankfully, HTML5 now has a solution. But before looking at that, we should have a better understanding of the Retina problem. srcset The ideal solution would be to send high-resolution versions of images to devices that can use them, while maintaining a standard resolution for others. This delivers the kirkjufell.jpg image to standard screens, and kirkjufell@2x.jpg to those that are 196DPI or higher. Note that the @2x appended to the filename is not required: it’s just a suggested naming convention for high-DPI images. Browser Support Detecting Screen Sizes. Create A Pure CSS Diagonal Menu - Call Me Nick. Get Source View Demo The Age-Old Horizontal Navigation Menu The horizontal navigation menu is an all-time classic, and people have found ways to keep them interesting and stylish over and over again. 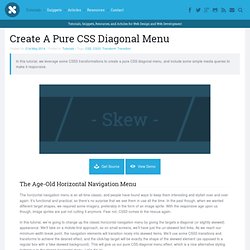 50 Visually Appealing CSS Tutorials & Techniques. If you are looking for in-depth articles on the inner workings of flexbox, or a comprehensive explanation for using CSS regions, then this is definitely not the post for you. 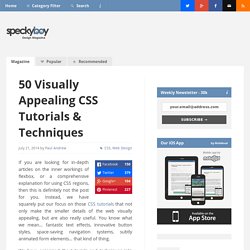 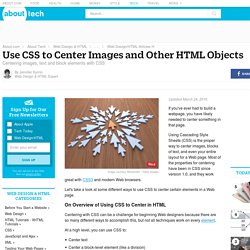 CSS Flip Animation. You've all asked for it and now I've added it: Internet Explorer support! 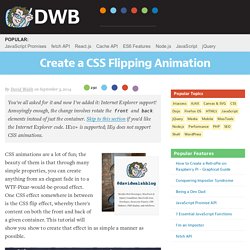 Annoyingly enough, the change involves rotate the front and back elements instead of just the container. Skip to this section if you'd like the Internet Explorer code. IE10+ is supported; IE9 does not support CSS animations. CSS animations are a lot of fun; the beauty of them is that through many simple properties, you can create anything from an elegant fade in to a WTF-Pixar-would-be-proud effect. One CSS effect somewhere in between is the CSS flip effect, whereby there's content on both the front and back of a given container. Quick note: this is not the first tutorial about this effect, but I've found the others over-complicated. The HTML The HTML structure to accomplish the two-sided effect is as you would expect it to be: CodePen - Front End Developer Playground & Code Editor in the Browser.

Cascading SVG Fill Color. One time someone told me their biggest problem with SVG icons is that they didn't match the color of text they were by. 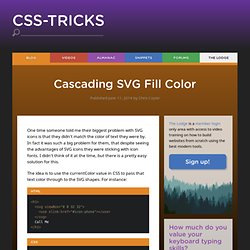 In fact it was such a big problem for them, that despite seeing the advantages of SVG icons they were sticking with icon fonts. I didn't think of it at the time, but there is a pretty easy solution for this. The idea is to use the currentColor value in CSS to pass that text color through to the SVG shapes. For instance: <h1><svg viewBox="0 0 32 32"><use xlink:href="#icon-phone"></use></svg> Call Me </h1> You can simplify this and let the fill cascade to the SVG: Prefix free: Break free from CSS vendor prefix hell!

-prefix-free lets you use only unprefixed CSS properties everywhere. 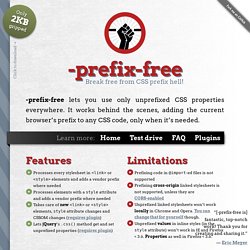 It works behind the scenes, adding the current browser’s prefix to any CSS code, only when it’s needed. The target browser support is IE9+, Opera 10+, Firefox 3.5+, Safari 4+ and Chrome on desktop and Mobile Safari, Android browser, Chrome and Opera Mobile on mobile. If it doesn’t work in any of those, it’s a bug so please report it. Flexible CSS cover images. I recently included the option to add a large cover image, like the one above, to my posts. 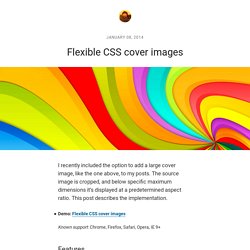 The source image is cropped, and below specific maximum dimensions it’s displayed at a predetermined aspect ratio. This post describes the implementation. TinyNav.js · Convert navigation to a select dropdown on small screen. Code Snippets. Everything You Need to Know About the CSS will-change Property. Introduction If you’ve ever noticed “that flicker” in WebKit-based browsers while performing certain CSS operations, especially CSS transforms and animations, then you’ve most likely come across the term “hardware acceleration” before. The CPU, GPU, and Hardware Acceleration In a nutshell, Hardware acceleration means that the Graphics Processing Unit (GPU) will assist your browser in rendering a page by doing some of the heavy lifting, instead of throwing it all onto the Central Processing Unit (CPU) to do.

When a CSS operation is hardware-accelerated, it usually gets a speed boost as the page rendering gets faster. As their names show, both the CPU and the GPU are processing units. Hardware acceleration (a.k.a. CSS animations, transforms and transitions are not automatically GPU accelerated, and instead execute from the browser’s slower software rendering engine. The Old: The translateZ() (or translate3d()) Hack. CSS Vocabulary. Create a Masked Background Effect With CSS. Today we're going to be stepping through a really cool technique you can use to create an effect that's a little bit like parallax scrolling, yet doesn't need any JavaScript; it can be achieved very simply through pure CSS. Start by checking out the live demo to see what you're going to learn (you'll need to view on a desktop/laptop to see the effect). This technique could be used to create great product description pages, or even something akin to a Powerpoint/Keynote presentation, and would be a great potential fit for online story illustration.

Here's how you do it. Normalize.css: Make browsers render all elements more consistently. Type Rendering Mix. CSS4. Multi-Device Layout Patterns. Through fluid grids and media query adjustments, responsive design enables Web page layouts to adapt to a variety of screen sizes. As more designers embrace this technique, we're not only seeing a lot of innovation but the emergence of clear patterns as well. I cataloged what seem to be the most popular of these patterns for adaptable multi-device layouts. To get a sense of emerging responsive design layout patterns, I combed through all the examples curated on the Media Queries gallery site several times.

I looked for what high-level patterns showed up most frequently and tried to avoid defining separate patterns where there were only small differences. Mostly Fluid. Code Beautifier: CSS Formatter and Optimiser. CSS tutorials mmmmm... Today i collected beautiful style design of CSS3 tutorials, examples that available for demo view and download such Text Effects and Layout, CSS3 Animated, CSS3 3D Text, Pure CSS, CSS drop-shadows, CSS image replacement, css background, css rounded corners, border radius, box shadow,css3 inner shadow, css drop shadow, css3 drop shadow and CSS3 slider/slideshow … etc. CSS 3 are going to be very interesting. They will allow the designer/developer to select on much more specific levels of the document. One of the nice things about this module is that many browsers are already starting to support the advanced CSS 3 selectors, so you can start trying them out now.

Learn how to use CSS to make a printed page look as good as your on-screen page. Justin James shows you what he did to make this work for one of his development projects. I've been working on a personal project for some time called Rat Catcher. (You can read about my development work on the project in my 10-part series about the OutSystems Agile Platform.) The end goal of any usage of Rat Catcher is to produce a report, and it occurred to me that users might want to print their reports. Recreating the OS X Dock with CSS - ZURB Playground - ZURB.com. 50 New Useful CSS Techniques, Tutorials and Tools. Advertisement These are great times for front-end developers. After months of exaggerated excitement about HTML5 and CSS3, the web design community now starts coming up with CSS techniques that actually put newly available technologies to practical use instead of abusing them for pure aesthetic purposes.

CSS References, Tutorials, Cheat Sheets, Conversion Tables and Short Codes. An Awesome CSS3 Lightbox Gallery With jQuery. Martin Angelov In this tutorial we are going to create an awesome image gallery which leverages the latest CSS3 and jQuery techniques. The script will be able to scan a folder of images on your web server and build a complete drag and drop lighbox gallery around it. It will be search-engine friendly and even be compatible with browsers which date back as far as IE6 (although some of the awesomeness is lost). We are using jQuery, jQuery UI (for the drag and drop) and the fancybox jQuery plugin for the lightbox display in addition to PHP and CSS for interactivity and styling. Before reading on, I would suggest that you download the example files and have the demo opened in a tab for reference.

CSS3 Transitions — Thank God We Have A Specification! Advertisement. 35 Useful CSS3 Tutorials To Boost Your Skills. Good CSS3 tutorials can teach you the tricks and techniques used by experienced web designers and developers to implement a specific solution. Looking the experts over the shoulders is also a great way to pick up fresh inspiration and further to see that something your client is asking for can actually be done. Learn CSS Layout. CSS3 Image Styles. When applying CSS3 inset box-shadow or border-radius directly to the image element, the browser doesn't render the CSS style perfectly. Web Designer Wall – Design Trends and Tutorials. How To Create a Pure CSS Polaroid Photo Gallery. Magical things can be done by combining various CSS properties, especially when some of the new CSS3 tricks are thrown into the mix.

Let’s take a look at building a cool looking stack of Polaroid photos with pure CSS styling. View the Demo Check out the demo to see what we’ll be building. Remember, because we’ll be using a couple of CSS3 properties, users with IE won’t see the complete effect, but fully supporting browsers such as Firefox and Safari will be treated to the whole experience. We’ll use basic CSS to style up the photos into a Polaroid style images, then inject some additional styling with shadows and rotation, then use the z-index property to alter the stacking order of all the objects.

Using the Title Attribute Instead of adding additional markup (more headings or paragraphs), we've opted to reuse the content within the title attribute of the surrounding anchor tag. Since it's good practice to use proper title text, and it's really freaking cool to do stuff with just CSS. Note: this is from the CSS2.1 spec, but browsers haven't implemented it fully. All CSS Properties Listed Alphabetically. Original Hover Effects with CSS3. A Simple, Responsive, Mobile First Navigation. How to Create a CSS3 Mega Drop-Down Menu.

Css.maxdesign.com.au - CSS resources and tutorials for web designers and web developers. Bring Your Forms Up to Date With CSS3 and HTML5 Validation. ZenCSSPropertiesEn - zen-coding - CSS-properties and its aliases for Zen CSS plugins - Set of plugins for HTML and CSS hi-speed coding. The Definitive Guide to CSS Transitions. Simple Effects for Drop-Down Lists. Collection of Useful Open Source CSS Resources.