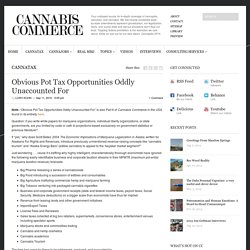 Question: if you write white papers for marijuana organizations, individual liberty organizations, or state governments, are you limited by code or oath to projections based exclusively on government statistics or previous literature? If “yes,” why does Scott Bates’ 2004 The Economic Implications of Marijuana Legalization in Alaska, written for Alaskans For Rights and Revenues, introduce previously unmentioned revenue-raising concepts like “cannabis tourism” and “Alaska Energy Bars” (edible cannabis) to appeal to the “kayaker market segment?” 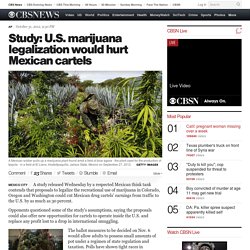 Getty Images MEXICO CITY A study released Wednesday by a respected Mexican think tank contends that proposals to legalize the recreational use of marijuana in Colorado, Oregon and Washington could cut Mexican drug cartels' earnings from traffic to the U.S. by as much as 30 percent. Explicit cookie consent. MERE hours before the midnight deadline last night, the House narrowly passed a $1.1 trillion federal budget agreement to fund the government through most of next year. 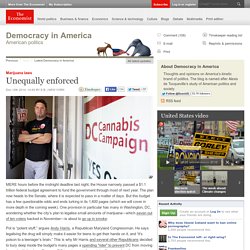 The plan now heads to the Senate, where it is expected to pass in a matter of days. But this budget has a few questionable odds and ends lurking in its 1,600 pages (which we will cover in more depth in the coming week). One provision in particular has many in Washington, DC, wondering whether the city’s plan to legalise small amounts of marijuana—which seven out of ten voters backed in November—is about to go up in smoke. Pot is “potent stuff,” argues Andy Harris, a Republican Maryland Congressman. Taking a Sober Look at Legalizing Marijuana. Legalising v decriminalising drugs: A half-smoked joint. “I’M GONNA smoke’a de ganja until I go blind,” sang Bob Marley. 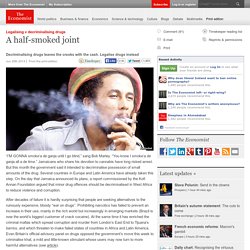 “You know I smoke’a de ganja all a de time.” Jamaicans who share his devotion to cannabis have long risked arrest. But this month the government said it intended to decriminalise possession of small amounts of the drug. Several countries in Europe and Latin America have already taken this step. On the day that Jamaica announced its plans, a report commissioned by the Kofi Annan Foundation argued that minor drug offences should be decriminalised in West Africa to reduce violence and corruption. After decades of failure it is hardly surprising that people are seeking alternatives to the ruinously expensive, bloody “war on drugs”. Pot Prisoners Cost Americans $1 Billion a Year. February 9, 2007 | Like this article? 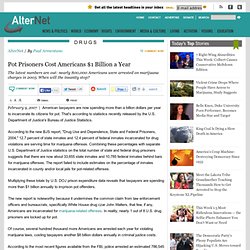 Join our email list: Stay up to date with the latest headlines via email. American taxpayers are now spending more than a billion dollars per year to incarcerate its citizens for pot. That's according to statistics recently released by the U.S. According to the new BJS report, "Drug Use and Dependence, State and Federal Prisoners, 2004," 12.7 percent of state inmates and 12.4 percent of federal inmates incarcerated for drug violations are serving time for marijuana offenses. Multiplying these totals by U.S. The new report is noteworthy because it undermines the common claim from law enforcement officers and bureaucrats, specifically White House drug czar John Walters, that few, if any, Americans are incarcerated for marijuana-related offenses.

Black Economy VS Shadow Economy. Why counting black market on GDP should lead to legalization. The European System of Accounts would require member countries to add their respective black market when calculating GDP for next year. 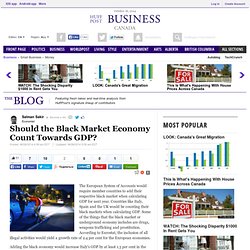 Countries like Italy, Spain and the UK would be counting their black markets when calculating GDP. Some of the things that the black market or underground economy includes are drugs, weapons trafficking and prostitution. According to Eurostat, the inclusion of all illegal activities would yield a growth rate of 2.4 per cent for the European economies. Adding the black economy would increase Italy's GDP by at least 1.3 per cent in the first year. This would allow Italy to comply with EU's rule of indebtedness that requires member countries to limit their expenditure to three per cent of GDP. NDARC - National Drug and Alcohol Research Centre. Revenue Potential & Economic Analyses. Marijuana legalization: Oregon, Alaska, and D.C. pass ballot measures. Australia Illicit use of drugs (NDSHS 2013 key findings)

Illicit use of drugs is a direct cause of death and disability as well as being a risk factor for a number of diseases which affect drug users and the wider community. 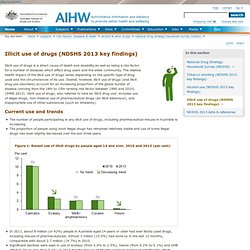 The relative health impact of the illicit use of drugs varies depending on the specific type of drug used and the circumstances of its use. Overall, however, illicit use of drugs (and illicit drug use disorders) account for an increasing proportion of the global burden of disease (moving from the 18th to 15th ranking risk factor between 1990 and 2010) (IHME 2013). Situation summary for Denmark — up to date summary of the national drug situation in Denmark (Country overviews) P Eurostat provisional value. e Estimated. 1 Gross domestic product (GDP) is a measure of economic activity. 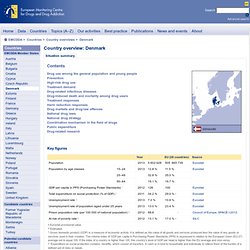 Ethan Nadelmann: Why we need to end the War on Drugs. National report 2007: Netherlands.