Colorado raises $150 million from marijuana. Will more states legalize? Colorado has brought in more than $150 million in marijuana tax revenue, according to official state data. 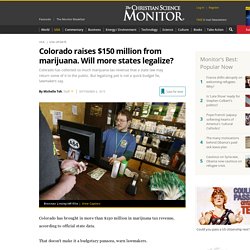 That doesn't make it a budgetary panacea, warn lawmakers. "The big lesson we tell other states is you probably shouldn't legalize marijuana if you want to make money – that's not why you do it," said J. Skyler McKinley, deputy director of the governor's Office of Marijuana Coordination, to the Huffington Post. "You do it because you think that a regulated marketplace might be safer than an unregulated marketplace, or you believe that the war on drugs didn't work. " How Is Marijuana Legalization Going? The Price Of Pot Peace Looks Like A Bargain. - Forbes. In 2012 John Larson, a retired high school math and science teacher, voted against I-502, the initiative that legalized marijuana in Washington. 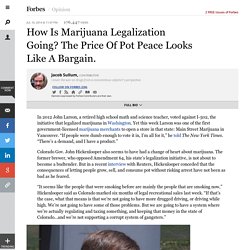 Yet this week Larson was one of the first government-licensed marijuana merchants to open a store in that state: Main Street Marijuana in Vancouver. “If people were dumb enough to vote it in, I’m all for it,” he told The New York Times. “There’s a demand, and I have a product.” 5 Charts Explaining Colorado's First Year of Legal Weed. Legalize it. 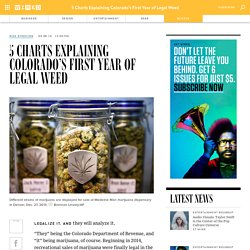 And they will analyze it. “They” being the Colorado Department of Revenue, and “it” being marijuana, of course. Beginning in 2014, recreational sales of marijuana were finally legal in the (Mile) High State. Overall, legalization has worked out pretty well. Crime is down, tax revenues are up, and everyone is happy (well, except for neighboring states grumbling about drug trafficking). More weed sized in mail from Colorado. DENVER (AP) — The amount of Colorado marijuana being seized en route to other states through the U.S. mail has more than quadrupled since 2010 and was destined for more states than before, according to a new report by a federally funded drug task force. 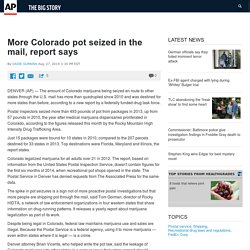 Postal inspectors seized more than 493 pounds of pot from packages in 2013, up from 57 pounds in 2010, the year after medical marijuana dispensaries proliferated in Colorado, according to the figures released this month by the Rocky Mountain High Intensity Drug Trafficking Area. Just 15 packages were bound for 10 states in 2010, compared to the 207 parcels destined for 33 states in 2013. Top destinations were Florida, Maryland and Illinois, the report states.

Colorado Prices before legalization. Growing illegal marijuana in rented houses across Colorado's front range and illicitly selling it throughout the state isn't for everyone, but it was once a way of life for Oscar. 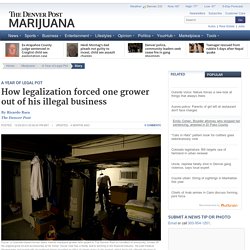 And the 36-year-old loved everything about his job, from the $80,000 income to his work schedule that left time for snowboarding to his simple daily regimen amid the awkwardly towering pot plants occupying his various living rooms and basements. "The heyday on a really good ounce was $350 in 2003 to 2008," said Oscar, whose real name isn't Oscar, but he was speaking to The Denver Post under conditions of anonymity. "But then the scale started to tip. (The ounces) went down to $300 — and this was really good weed. "I felt that price dip, hard. " 100 questions about legal marijuana: Go-to guide for Colorado. CHCEA_EconomicImpactStudy_080814 %281%29.pdf. 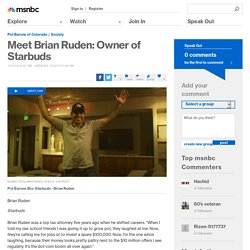 Brian Ruden Starbuds Brian Ruden was a top tax attorney five years ago when he shifted careers. Welcome to Forbes. Recreational Marijuana: A Guide for Local Governments. Updated 11/2014 With Initiative 502 passed, the feds giving the green light, and new regulations effective November 16th, it's time for local governments across Washington State to get serious about a regulated recreational marijuana industry! 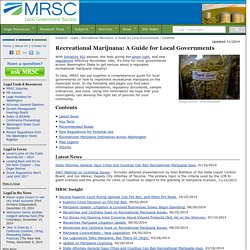 To help, MRSC has put together a comprehensive guide for local governments on how to implement recreational marijuana on the municipal level. In the following web pages you find basic information about implementation, regulatory documents, sample ordinances, and more. Using this information we hope that your municipality can develop the right set of policies for your community.

Latest News. Marijuana legalization: What the next wave of pot-legalizing states can learn from Colorado and Washington. Photo by Cliff DesPeaux/Reuters. 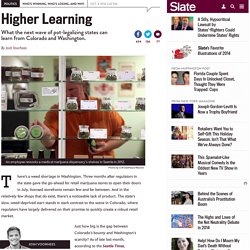 Marijuana use expands in Colorado, a new documentary to air and more. High and rising Though the numbers are from before 2014, and thus don’t address the effects of recreational marijuana legalization, a new study from the National Survey on Drug Use and Health says Colorado has the second-highest percentage of marijuana users in the country. 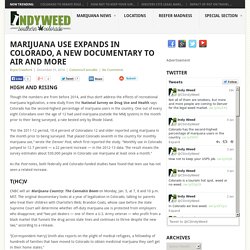 One out of every eight Coloradans over the age of 12 had used marijuana (outside the MMJ system) in the month prior to their being surveyed, a rate bested only by Rhode Island. “For the 2011-12 period, 10.4 percent of Coloradans 12 and older reported using marijuana in the month prior to being surveyed. That placed Colorado seventh in the country for monthly marijuana use,” wrote the Denver Post, which first reported the study. “Monthly use in Colorado jumped to 12.7 percent — a 22 percent increase — in the 2012-13 data. Denver Marijuana Info. Tourists flock to Colorado to smoke legal weed - Aug. 22, 2014. NEW YORK (CNNMoney) "We have a flow of tour buses coming in every day now," said Toni Fox, owner of 3D Cannabis Center, a Denver dispensary with an influx of Japanese and Saudi tourists. 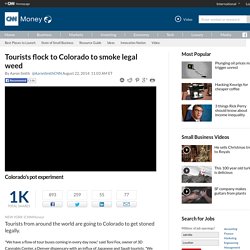 "We even get charter buses from Texas! " Fox is billing her dispensary as a "tourist friendly" destination. It has a living-room-style reception room and an 80-foot long viewing corridor with rows of windows so customers can see inside the marijuana greenhouse. Map the Impact of Immigration Across the Nation. 1. Introduction Colorado is home to a thriving startup community and agriculture sector, and both industries depend on immigrants to prosper. In recognition of the contributions that immigrants make to the Colorado economy, a bipartisan group of prominent business and civic leaders have come together to form The Colorado Compact, an in-state effort to build support for national action on smart immigration reform.

The 85 signers of the Colorado Compact include Senator Michael Bennet, a Democrat, and former Senator Hank Brown, a Republican, in addition to leaders of faith organizations, law enforcement agencies, agricultural interests, and colleges and universities. Among other goals, the Compact calls for establishing a pathway to citizenship for upstanding undocumented immigrants, improving our current worker visa system, and implementing a reasonable strategy to enforce immigration laws. Size of foreign-born population495,170 2. Colorado Not Suffering Buyer's Remorse Over Legal Marijuana, Poll Finds. Nine months after Colorado shops opened their doors to sell the first bags of recreational marijuana, a majority of state residents still support legal weed sales. A new NBC News/Marist Poll shows that 55 percent of adult Colorado residents back the law that legalized the regulated use, possession and sale of cannabis by adults. The poll found that 41 percent oppose the law, including 8 percent who said they are actively trying to overturn the legislation.

The supportive majority combines the 27 percent of adults who actively support the law with the 28 percent who favor the law but do not actively support it. Since marijuana legalization, highway fatalities in Colorado are at near-historic lows. Strada in salita nel Colorado per il primo sistema bancario della cannabis ricreativa. - Dolce Vita. Colorado Marijuana Taxes: Up 10 Percent and Not Slowing. Marijuana legale e incidenti stradali mortali. Can Cannabis Cut Car Crashes? The anti-pot group Project SAM claims drug test data show that marijuana legalization in Washington, approved by voters in that state at the end of 2012, already has made the roads more dangerous. The group notes with alarm that the percentage of people arrested for driving under the influence of a drug (DUID) who tested positive for marijuana rose by a third between 2012 and 2013.

"Even before the first marijuana store opens in Washington, normalization and acceptance [have] set in," says Project SAM Chairman Patrick J. Is Black Market Marijuana Winning in Colorado? Although recreational marijuana is now just as legal as booze in the state of Colorado, a recent report indicates the majority of residents are still opting to buy weed from street dealers rather than relish in the newfound stoner delights of the legitimate pot commerce. According to an original report by Travelers Today, a travel website dabbling in offbeat news and pseudo journalism, much of Colorado’s stoner society, specifically college students, have continued to purchase marijuana from the black market due to the overall cost involved in obtaining a legal buzz.

DEA: Mexican Cartels Move into Colorado, Washington. Drug Enforcement Administration chief Michele Leonhart, in testimony before a House Appropriations subcommittee April 2, went on the offensive against the cannabis legalization initiatives in Washington state and Colorado. "What was explained to the voters was how much money that they'd be raising," Leonhart said. Explicit cookie consent. Hickenlooper unveils next year's Colorado budget and taxpayer rebates.

Colorado Amendment 64. For Colorado's earlier proposed amendment to state statutes related to cannabis, see Colorado Amendment 44. Ballot summary[edit] Proposed initiative 2011/12 #30 was submitted on January 4 and found sufficient by the Secretary of State on February 27 to appear on the general ballot for the November election.[1] Personal use[edit] Adults 21 or older can grow up to three immature and three mature cannabis plants privately in a locked space, legally possess all cannabis from the plants they grow (as long as it stays where it was grown),[5] legally possess up to one ounce of cannabis while traveling,[6] and give as a gift up to one ounce to other citizens 21 years of age or older.[7] Consumption is permitted in a manner similar to alcohol, with equivalent offenses proscribed for driving.[8] The new legislation does not apply to medical cannabis.[9] Commercial regulation[edit] Support and opposition[edit] Support[edit] Opposition[edit] Implementation[edit] See also[edit] References[edit]

Price War Heats Up Between Legal Marijuana and the Black Market. Medical Marijuana is Still the Best Deal on Pot in Colorado. The Most Popular Day of the Week For Buying Weed.