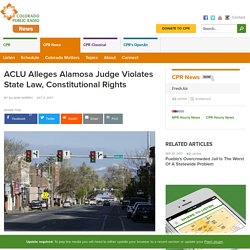 Judge Daniel Powell works six days a month as chief municipal judge for the city of Alamosa in southern Colorado. The city is among the poorest in the state, with 35 percent of people living below the poverty line. Powell’s prolific use of the city jail for low-level crimes — like traffic offenses, petty theft under $100 and trespassing — has ballooned the jail’s population to 115 when it only has capacity for 48 people. “The city is dedicated to all local and state laws … and any reference to the contrary the city takes very seriously,” said Heather Brooks, Alamosa city manager, in response to the report, which she said she just saw Thursday. Powell is in violation of the newly passed state law, the ACLU found. Bill to cap higher education tuition raises killed. A partisan vote Thursday that killed a proposal to cap tuition raises hinged, like many things in Colorado, on local control and on just how little Colorado funds colleges and universities currently. 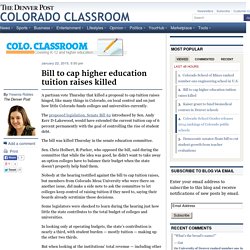 The proposed legislation, Senate Bill 62 introduced by Sen. Andy Kerr D-Lakewood, would have extended the current tuition cap of 6 percent permanently with the goal of controlling the rise of student debt. The bill was killed Thursday in the senate education committee. Sen. Chris Holbert, R-Parker, who opposed the bill, said during the committee that while the idea was good, he didn’t want to take away an option colleges have to balance their budget when the state doesn’t properly help fund them. 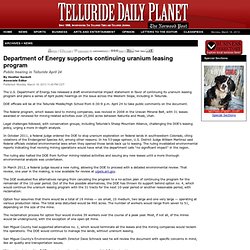 April 24 to take public comments on the document. The federal program, which leases land to mining companies, was revived in 2008 in the Uravan Mineral Belt, with 31 leases awarded or renewed for mining-related activities over 25,000 acres between Naturita and Moab, Utah. Legal challenges followed, with conservation groups, including Telluride’s Sheep Mountain Alliance, challenging the DOE’s leasing policy, urging a more in-depth analysis.

In October 2011, a federal judge ordered the DOE to stop uranium exploration on federal lands in southwestern Colorado, citing violations of the Endangered Species Act, among other reasons. In his 53-page opinion, U.S. The ruling also halted the DOE from further mining-related activities and issuing any new leases until a more thorough environmental analysis was undertaken. The reclamation process for option four would involve 39 workers over the course of a peak year. Colorado Gets Worse with SB 13-013. Things in Colorado are getting worse, and perhaps a bit strange as well. 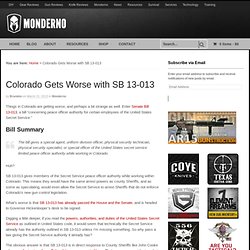 Enter Senate Bill 13-013, a bill “concerning peace officer authority for certain employees of the United States Secret Service.” The bill gives a special agent, uniform division officer, physical security technician, physical security specialist, or special officer of the United States secret service limited peace officer authority while working in Colorado. Huh? SB 13-013 gives members of the Secret Service peace officer authority while working within Colorado. This means they would have the same arrest powers as county Sheriffs, and as some as speculating, would even allow the Secret Service to arrest Sheriffs that do not enforce Colorado’s new gun control legislation. What’s worse is that SB 13-013 has already passed the House and the Senate, and is headed to Governor Hickenlooper’s desk to be signed. Whatever the reason, I don’t think we’ve heard the last on this front. Like this: Like Loading...

The tension surrounding the notion of regulating firearms is leading to new, unexpected federal involvement in local authority. Desperation is showing on all fronts in this fight. The state's decriminalization of marijuana has certainly left a black eye, but the shooting at the Aurora Theater, which many contend is a story officials have not fully divulged (see sidebar), places the mile high state on a slippery slope for gun owners. Late last week, newly released court documents outlined of details of the deadly 14 Dec shooting. In response, Sen. Here is the exact wording of SB13-013: 2 SECTION 1. 3 follows: State grants Secret Service vast new powers. Text smaller Text bigger A bill is heading to Colorado Gov. 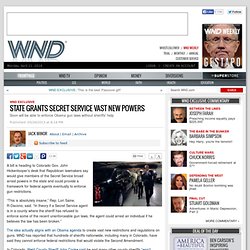 John Hickenlooper’s desk that Republican lawmakers say would give members of the Secret Service broad arrest powers in the state and could provide a framework for federal agents eventually to enforce gun restrictions. “This is absolutely insane,” Rep. Lori Saine, R-Dacono, said.