Modern Dance History. Spanish I’ll use the expression modern dance history to talk about figures, choreographic productions and related facts occurred in western culture between the end of the XIX century and the 1950s. 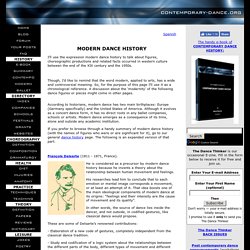 Though, I’d like to remind that the word modern, applied to arts, has a wide and controversial meaning. So, for the purpose of this page I’ll use it as a chronological reference. A discussion about the ‘modernity’ of the following dance figures or pieces might come in other pages. According to historians, modern dance has two main birthplaces: Europe (Germany specifically) and the United States of America. If you prefer to browse through a handy summary of modern dance history (with the names of figures who were or are significant for it), go to our general dance history page. François Delsarte (1811 - 1871, France). He is considered as a precursor by modern dance history because he invents a theory about the relationship between human movement and feelings. Mary Wigman (1886 – 1973 Germany): Contemporary Dance History. Spanish I’ll use the expression 'contemporary dance history' to talk about figures, choreographic productions or related facts occurred in western culture between the 1950s and the present time. 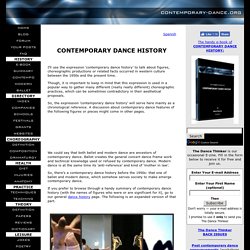 Though, it is important to keep in mind that this expression is used in a popular way to gather many different (really really different) choreographic practices, which can be sometimes contradictory in their aesthetical proposals. So, the expression 'contemporary dance history' will serve here mainly as a chronological reference. Bangarra Dance Theatre’s Stephen Page scores Helpmann Award. After celebrating 25 years as artistic director with Bangarra Dance Theatre, Stephen Page has been awarded the JC Williamson Award for outstanding contribution to the enrichment of Australia's live performance culture at the 16th annual Helpmann Awards in Sydney Stephen Page has choreographed 23 pieces for the only Indigenous music theatre company of its kind and the award symbolises how far Indigenous performance has come since he first took the job in 1991. 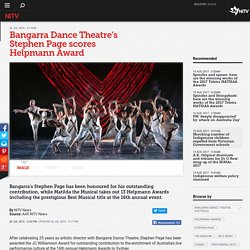 "With land comes stories, and that's why we're all here tonight…A lot of mob before me laid down that good solid ground for us to walk on that right pathway, but I appreciate the recognition from live performance Australia the council, the committee…" History of Black Dance: 20th-Century Black American Dance. Front cover of The Sketch showing Josephine Baker, 1931. Harlem Renaissance Black culture had a real influence on dance and other art forms in the 20th century. After the American civil war a surge of people from the Caribbean and Deep South migrated into North American cities. In New York the district of Harlem became home to black people from different cultural traditions with their own dances and music. Harlem became the ‘in place’ to be amongst both black and white New Yorkers – its clubs brought together dance and music that was alive and exciting.

Shuffle Along The first all black musical on Broadway called Shuffle Along opened in 1921. Josephine Baker. Who was Isadora Duncan? Isadora Duncan Dances and Dance Technique. Martha Graham Dance Company (@marthagrahamdance) Watch Alvin Ailey Dancers Perform to Ibeyi's Music. Cunningham, Merce (1919-2009) - HistoryLink.org. Merce Cunningham was an American choreographer and was, before his death in July 2009, probably the most famous living choreographer in the world. 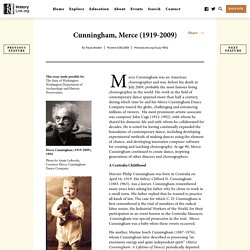 His work in the field of contemporary dance spanned more than half a century, during which time he and his Merce Cunningham Dance Company toured the globe, challenging and entrancing millions of viewers. His most prominent artistic associate was composer John Cage (1912-1992), with whom he shared his domestic life and with whom he collaborated for decades. He is noted for having continually expanded the boundaries of contemporary dance, including developing experimental methods of making dances using the element of chance, and developing innovative computer software for creating and teaching choreography. At age 90, Merce Cunningham continued to create dance, inspiring generations of other dancers and choreographers. A Centralia Childhood Mercier Philip Cunningham was born in Centralia on April 16, 1919. Beginning with Maude Barrett Accolades. Australian indigenous ceremony – song, music and dance. Warning. 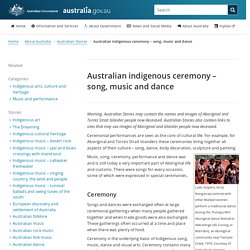 Australian Stories may contain the names and images of Aboriginal and Torres Strait Islander people now deceased. Australian Stories also contain links to sites that may use images of Aboriginal and Islander people now deceased. Ceremonial performances are seen as the core of cultural life. For example, for Aboriginal and Torres Strait Islanders these ceremonies bring together all aspects of their culture – song, dance, body decoration, sculpture and painting. Ludo Kuipers, Anny Nungarrayi (centre) with other Warlpiri women perform a traditional dance during the 'Purlapa Wiri' Aboriginal dance festival in Alekarenge (Ali Curung or Warrabri), an Aboriginal community near Tennant Creek, 1976. Music, song, ceremony, performance and dance was and is still today a very important part of Aboriginal life and customs.

Ceremony. Cultural Dance. DANCE VIEW - HOW DANCE AND OTHER ARTS INFLUENCE EACH OTHER. As a young dancer who had just left the Denishawn Company in the early 1920's to strike out on her own, Martha Graham was once returning to her home in California after a trip to the East. 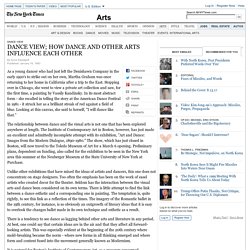 Stopping over in Chicago, she went to view a private art collection and saw, for the first time, a painting by Vassily Kandinsky. In its most abstract form - she recalled in telling the story at the American Dance Festival in 1981 - it struck her as a brilliant streak of red against a field of blue. Looking at this canvas, she said to herself, ''I will dance like that.'' The relationship between dance and the visual arts is not one that has been explored anywhere at length. The Institute of Contemporary Art in Boston, however, has just made an excellent and admittedly incomplete attempt with its exhibition, ''Art and Dance: Images from the Modern Dialogue, 1890-1980.'' Unlike other exhibitions that have mixed the ideas of artists and dancers, this one does not concentrate on stage designers.