To Buy. 0. 8 Ways to Hack a Sweatshirt — Sew DIY. Dermatillomanie France. DERMATILLOMANIA: I Can't Stop Tearing My Fingers Apart. If I ever meet you, you'll know what kind of week I've had by whether or not I shake your hand. 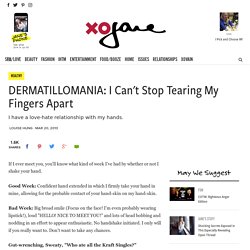 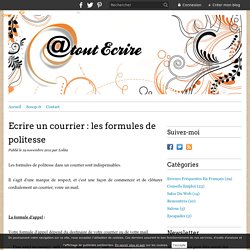 5 Signs You Are Experiencing Too Much Stress. We all experience varying degrees of stress, whether we're undergoing finals week, waiting for the doctor to call back with medical results, or frantically cleaning our house for family visits. 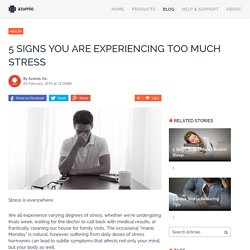 The occasional “manic Monday” is natural, however suffering from daily doses of stress hormones can lead to subtle symptoms that affects not only your mind, but your body as well. If you think you may be stressed out, look for these 5 key signs: 1. Weird or Reoccurring Dreams One might think sleeping would be the easiest way to leave your troubles behind; unfortunately, a high stress level can sometimes follow us to bed. 2. Grinding your teeth during sleep is a very common sleep habit. 3. The weekend is usually when we can start relaxing. 4. 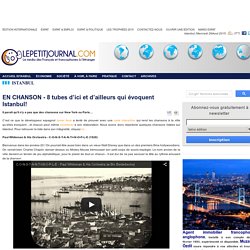 Business. 19 yr old daughter just failed first year at uni - studies terminated - what can we do? (long -sorry)! My daughter was distraught and said she didnt know why she had failed as her marks were OK. 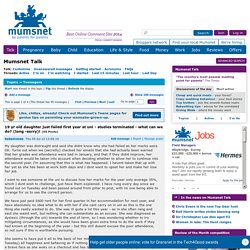 Turns out when we (secretly) checked her emails that she had actually been warned that her grades and attendance were bad in January, and that if they didnt improve, her attendance would be taken into account when deciding whether to allow her to continue into the second year. I'm assuming that this is what has happened. I havent taken that up with her yet as she has been at work both days and I dont want to upset her and make her lose her job.

I want to see someone at the uni to discuss how her marks for the year only average 35%, which I dont wish to challenge, just have them explained. I have rung every day since we found out on Tuesday and been passed around from pillar to post, with no one being able to arrange for us to see the correct person. Jobs in London – Research Turkey. Jobs in London. 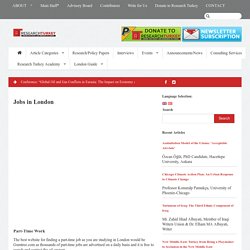 BBC Academy - Journalism - Writing for the web. An overview of the basics of writing engaging news online, covering language, style, visual appeal - and how to avoid making mistakes. 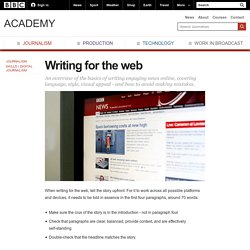 When writing for the web, tell the story upfront. For it to work across all possible platforms and devices, it needs to be told in essence in the first four paragraphs, around 70 words: Make sure the crux of the story is in the introduction - not in paragraph fourCheck that paragraphs are clear, balanced, provide context, and are effectively self-standingDouble-check that the headline matches the story.

Trouver un stage en Angleterre. Turkish women post selfies wearing black as US condemns Ozgecan Aslan murder. Following the news of her violent death, there were protests in the capital, Ankara, as well as Istanbul and Arslan's home town, Mersin. 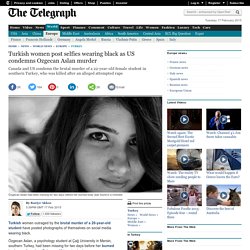 Protesters in Istanbul with placards saying: 'We want to live like women' and 'Justice for Özgecan' (AFP) It was reported Arslan was kidnapped on her way home on Wednesday and then the driver attempted to rape her. It is believed she used pepper spray to fight him off and the BBC's Selin Grit wrote that she was stabbed to death. She had also apparently been hit in the head with and an iron pipe. Many protesters believe the latest case reflects the problem of violence against women and girls. According to Al Jazeera, official figures said an estimated 28,000 women were assaulted in 2013. As well as protests across the country over the weekend, women began posting pictures on social media on Monday wearing black. 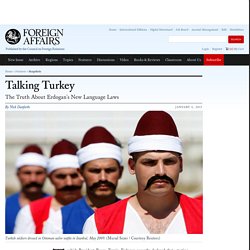 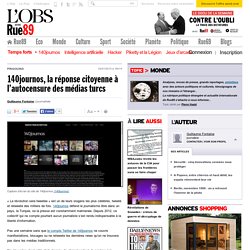 Why am I tired all the time? Feeling exhausted is so common that it has its own acronym, TATT, which stands for ‘tired all the time’. Dr Rupal Shah, a GP in south London, says tiredness is one of the most common complaints she sees in her surgery. “I see loads and loads of patients who complain of feeling exhausted, even though they’re sleeping well.

Often it’s been going on for several months.” At any given time, one in five people feels unusually tired, and one in 10 have prolonged fatigue, according to the Royal College of Psychiatrists. Women tend to feel tired more than men. “It’s unusual to find anything physically wrong.

Portail de la langue turque. Voltaire, Liberté de Penser (1765) BOLDMIND. Dare to Compete, Mrs. Clinton! I recently attended the Society of Human Resource Management (SHRM) annual convention in Chicago and Hillary Clinton was the opening night keynoter. She addressed an enthusiastic crowd of 10,000+ people and left me ready to engage my competitive spirit. While the former Secretary of State is passionate about many things, her focus is on women and children so she had me at hello. She started by telling the international audience that hiring women is the unfinished business of this century that will help the economy thrive and increase the GDP. Madonna 2013 Interview – Madonna Quotes About Being Daring. That is a catchphrase that's often associated with me. I made a documentary film with this title, and it has stuck to me like flypaper ever since. It's a fun game to play if you're in the mood to take risks, and usually I am. However, you have to play with a clever group of people.