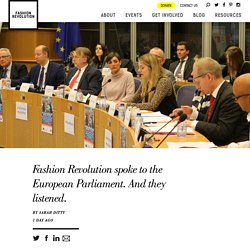 This event came the day before an important plenary vote by Members of the European Parliament (MEPs) on a report pushing rules to curb worker exploitation throughout fashion’s global supply chains. Good news! The European Parliament passed the resolution 505 votes against 49 with 57 abstentions. Bangladesh Crackdown on Labor - New York Times - Feb 2017. International pressure following the 2013 collapse of a garment factory building in Bangladesh that killed more than 1,100 people brought improvement in workplace safety and forced the government of Prime Minister Sheikh Hasina to amend the country’s labor laws. 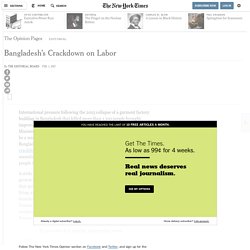 Yet it would be a mistake for Western consumers to assume that clothing made in Bangladesh is now produced under safe, fair conditions. A brutal recent crackdown on protesting garment workers is proof that clothing manufactured in Bangladesh is still exacting a terrible price from the people who make it. A strike by workers at the Windy Apparels factory in December, to protest working conditions and shockingly low wages, set off protests that spread to dozens of factories. Owners responded by suspending or firing some 1,500 workers. High street clothes made by children in Myanmar for 13p an hour - Feb 2017. Children as young as 14 have been employed to make clothes for some of the most popular names on the UK high street, according to a new report. 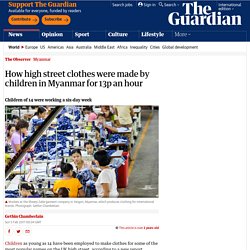 New Look, Sports Direct’s Lonsdale brand and H&M have all used factories found to have employed children, after several major brands switched their production to low-cost factories in Myanmar. Workers told investigators that they were paid as little as 13p an hour producing clothes for UK retailers – half the full legal minimum wage.

British factory workers paid £3 an hour making clothes for high street giants. The woman whose mum inspired her to track ethical food. Jessie Baker thanks her mother for the inspiration to start her company, Provenance. 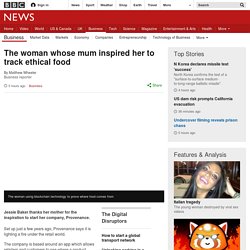 Set up just a few years ago, Provenance says it is lighting a fire under the retail world. The company is based around an app which allows retailers and customers to see where a product comes from, from its origins to its point of sale. "Behind every product is a complex chain of people and places and that's a really important part of why people buy things," Ms Baker explains. "Provenance is all about making that information transparent to shoppers but also to businesses all along the supply chain.

" Jessie and Jenny Image copyright Jessie Baker But it began with her mother Jenny. "She's a pioneer of conscious consumption," Ms Baker says. "She raised me, my brother and sister, to care about what we eat and buy, but also helped us understand from an early age where things come from. Provenance uses this technology to log and store every stage of a supply chain in a way that anyone can access. Fishy business. Police and fear stalk the streets of Dhaka as clothes workers fight for more than £54 a month. Fewer workers than usual have been gathering for cup of chai near the guarded, grey towers of Ashulia, a hub for garment factories on the outskirts of Dhaka. 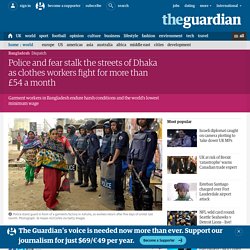 “Everyone seems scared of being harassed by the police,” says one tea seller, frowning from his stall. Ashulia’s garment factories, which produce clothing for ranges on sale across the developed world, are alive with activity but the tension brimming in the air – and the lines of armed guards posted outside some gates – echo the anger that has swept the area. Last month, tens of thousands of workers clocked in then immediately returned to the streets, joining the largest protests since those that followed the collapse in 2013 of the Rana Plaza clothing factory, causing more than 1,100 deaths. The unrest over rates of pay forced around 50 factories to shut for more than a week and led to dozens of arrests and the “temporary dismissal” of at least 1,500 workers.

“We had heard of the protests going on outside,” he says. Retail group approves Bangladesh factories as safety concerns persist, report finds. An organisation backed by global retailers including Gap, Target and Walmart is giving passing grades to Bangladeshi factories that have yet to implement life-saving safety changes the retailers pledged to put in place following a deadly building collapse in 2013 that killed 1,137 people, according to a new report published Monday. 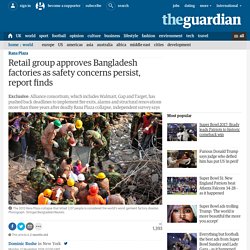 The Guardian has been given an exclusive preview of the first independent systematic survey of the Bangladeshi garment factories used by the Alliance consortium of retailers set up after the deadly Rana Plaza factory collapse that triggered a global consumer backlash against major retailers. Three and a half years after the building collapse, the authors conclude that the factories that provide clothes to some of the biggest names in retail have so far failed to implement key renovations by their own mandated deadlines and that: The Alliance disputed the report’s findings, saying it relied on inaccurate and outdated information. “I trust my engineers. What Happened to American Apparel? On December 22, 2016, Los Angeles based clothing company American Apparel closed the doors of its London shops for the last time, after filing for bankruptcy for the second time that year in November. 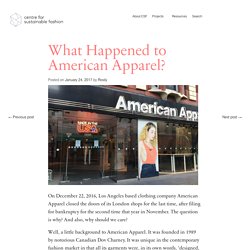 The question is why? And also, why should we care? Bangladesh factory fire: At least 23 killed in Tongi. Rana Plaza collapse: 38 charged with murder over garment factory disaster. A court in Bangladesh has formally charged 38 people with murder in connection with the 2013 collapse of the Rana Plaza building which killed 1,135 people in the country’s worst industrial disaster. 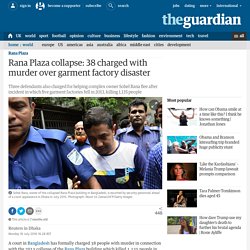 A total of 41 defendants face charges over the collapse of the complex, which housed five garment factories supplying global brands. Plaza owner Sohel Rana is the principal accused. Public prosecutor Abdul Mannan said 38 people had been charged with murder while three were charged with helping Rana to flee after the incident. Rana was arrested after a four-day manhunt, apparently trying to flee across the border to India. Years after the Rana Plaza tragedy, too many of Bangladesh’s factories are still “death traps” For years, ExxonMobil has been running away from the environmental politics of former CEO Lee Raymond, a salty-tongued chemist who spent millions of company money to fund writers and foundations to sow scientific doubt about climate change. 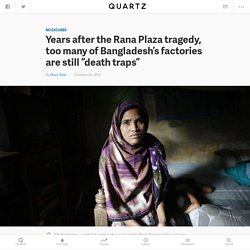 Although Raymond retired a decade ago, his hand remains visible in the undercurrent of US skepticism toward climate change that began in the 1990s and has flowed through US politics ever since. But new reports suggest an even more complex legacy—that Raymond, while he was leading the charge to undermine near-consensus climate science, had access to pioneering, Exxon-produced studies that meticulously documented the potential perils of climate change. Beginning in 1977, Exxon scientists began to produce a decade of papers that described a general scientific consensus that the burning of fossil fuels was changing global climate.

Unions censure western brands over Bangladesh factory safety delays. Bangladesh murder trial over Rana Plaza factory collapse. Police in Bangladesh have charged the owner of the Rana Plaza complex with murder over the building's collapse in 2013, killing more than 1,100 people. 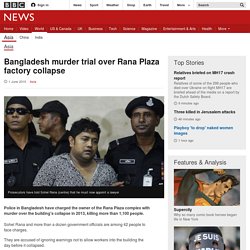 Sohel Rana and more than a dozen government officials are among 42 people to face charges. They are accused of ignoring warnings not to allow workers into the building the day before it collapsed. It was the worst industrial disaster in the country's history - and prompted criticism of global retail practices. After two years, the Rana Plaza fund finally reaches its $30m target.

After more than two years of negotiations involving backroom deals, activists chaining themselves to shops, global petitions and statements by G7 leaders, the Rana Plaza donors trust fund has finally met its target of $30m. When the Rana Plaza factory complex in Dhaka, Bangladesh, collapsed in April 2013, a campaign was launched to provide adequate compensation to the families of the 1,134 people killed in the collapse and the 2,500 severely injured survivors.

The campaign focused on securing compensation not just from brands that had been producing at Rana Plaza, such as Primark, but from any brand using Bangladesh to manufacture clothing. Ben Vanpeperstraete, from the global trade union UNI and trade union federation IndustriALL, who worked on the organising committee for the fund, describes the “unprecedented” step of bringing together all the stakeholders to discuss compensation. Once an agreement was reached, payments to the fund began to arrive. Slow response from brands. Two years after Rana Plaza, have conditions approved in Bangladesh’s factories? On 24 April 2013, an eight-story garment factory collapsed in Dhaka, the capital of Bangladesh. The building’s fall killed 1,134 people and injured hundreds of others. Rana Plaza survivors left in the lurch. Bangladesh: Rana Plaza Victims' Orphans Stage Sit-In On 2nd Anniversary of Collapse - Union League.

Staging a sit-in on the second anniversary of the Rana Plaza factory collapse that killed 1,138 garment workers, orphaned children of the murdered workers called for "No more orphan among garment workers' children like us for the negligence of factory owners, buyers, government & BGMEA! " Orphan children, who lost both or either of their parents in the Rana Plaza building collapse, along with leaders of League member National Garment Workers Federation (NGWF) yesterday, on April 24, 2015, pleaded to all concerned that the Rana Plaza disaster be the last accident in the RMG sector in Bangladesh and that there not be any more orphans among garment workers' children in the future caused by the negligence of buyer brands, factory owners, government and BGMEA.

Major events and demonstrations in at least 20 countries worldwide called on Benetton, Mango, Inditex and other high street labels to make sure Bangladesh workers get the US$30 million they need. The Global Day of Action included such events as a mass demonstration in Bangladesh, a concert of sewing machines in Italy, events outside stores including Mango, JC Penney, Zara, and Walmart in the US, and a flashmob outside stores in Germany and Belgium.

Thousands more showed their support online, through facebook messages, sharing solidarity photos and tweets. The urgency and need for full compensation grows with each passing day. Rana Plaza: Two years after the tragedy, why has so little changed? ‘Rana Plaza victims unlikely to get justice’ Class action suit seeks $2 billion from Loblaw, Joe Fresh over 2013 Bangladesh garment factory collapse. TORONTO — A Toronto law firm is seeking $2 billion in damages from Loblaw Cos. and its Joe Fresh clothing line in a proposed class action lawsuit related to the 2013 Bangladesh garment factory collapse that killed more than 1,100 workers. YouTube 'haulers' get ethical with a new #haulternative campaign for Fashion Revolution Day. High street fast fashion shopping 'hauls' are a YouTube phenomenon.

But some voguish vloggers with a conscience are finding alternative ways to get their fashion fix for Fashion Revolution Day and asking: who made your clothes? BY Tamsin Blanchard | 24 April 2015 TelegraphPlayer_TMG11536174 Meet Connie Glynn, a 21-year-old second-year film-studies student at Sussex University who has a YouTube channel starring her alter ego, Noodlerella. She uploads videos every Saturday and Wednesday to her fan base of almost 60,000 subscribers who love her kooky mix of Disney songs, cartoon voices and Japanese kawaii cutie-pie dressing-up games. A year ago, she packed in her part-time job at the Co-op because her YouTube earnings from advertising placed at the beginning of her videos were outstripping her wages. 'People love the haul videos,' she told me one Saturday morning before setting off on a spree around Brighton, where she now lives. READ: Become a Fashion Revolutionary. Reformation Showing Fashionistas They Can Change the World Without Changing Their Style.