Study Finds Memory Has a Fascinating Effect On Sleep - PsyBlog. Poor sleep’s negative effect on memory is well-known, but what about the effect of memory on sleep? 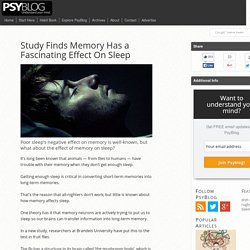 It’s long been known that animals — from flies to humans — have trouble with their memory when they don’t get enough sleep. Getting enough sleep is critical in converting short-term memories into long-term memories. Free Management Library (SM) 16 Tips for Getting 90 Percent of Your Work Done in the Morning. This One Simple Thing Can Make Your Life Much Better. Go Buy A Notebook Many people have written to me saying they love all the research on bettering themselves but need that first step on how to shoehorn it in to their day-to-day life. 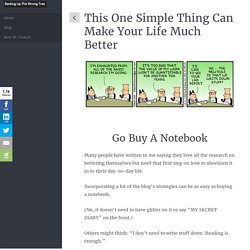 Incorporating a lot of the blog’s strategies can be as easy as buying a notebook. Perfect Time-Based Productivity: A unique way to protect your peace of mind as time demands increase: Francis Wade: 9781505408096: Amazon.com: Books. Productivityist - Productivity Tips & Tools for Everyone. Mind The Gap: 2 Ways To Find The Holes In Your Productivity. Productivity vs. Getting Things Done. This post originally appeared on the Exist blog. 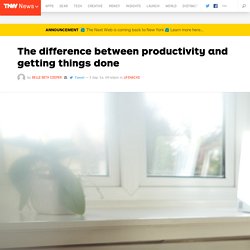 Productivity. 52 Tips for Happiness and Productivity. By Leo Babauta This is something I’ve been wanting to write for some time — a Handbook for Life. 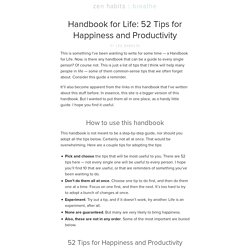 Now, is there any handbook that can be a guide to every single person? Of course not. This is just a list of tips that I think will help many people in life — some of them common-sense tips that we often forget about. Consider this guide a reminder. Brian Tracy on the art and science of time management. Productivity 101: How to Use Personal Kanban to Visualize Your Work. The Magic of Doing One Thing at a Time - Tony Schwartz. By Tony Schwartz | 8:53 AM March 14, 2012 Why is it that between 25% and 50% of people report feeling overwhelmed or burned out at work? 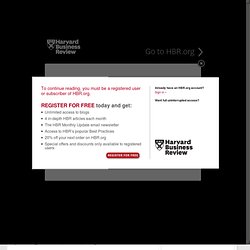 It’s not just the number of hours we’re working, but also the fact that we spend too many continuous hours juggling too many things at the same time. What we’ve lost, above all, are stopping points, finish lines and boundaries. Technology has blurred them beyond recognition. Wherever we go, our work follows us, on our digital devices, ever insistent and intrusive. Tell the truth: Do you answer email during conference calls (and sometimes even during calls with one other person)? This Printable To-Do Template Shows How Long Those Tasks Really Take. My 23 Go-To Productivity Tools for Remote Work. At Todoist, we know the right tool can mean the difference between frantically struggling to keep all of the balls in the air at once and feeling calm and in control of everything you need to get done. 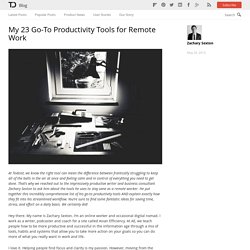 That’s why we reached out to the impressively productive writer and business consultant Zachary Sexton to ask him about the tools he uses to stay sane as a remote worker. He put together this incredibly comprehensive list of his go-to productivity tools AND explain exactly how they fit into his streamlined workflow. You’re sure to find some fantastic ideas for saving time, stress, and effort on a daily basis. We certainly did!

Hey there. I love it. Fortunately, my productivity buddy and fellow online worker Thomas Frank did a roundup of all the apps and tools he uses to keep his blog, podcast and youtube channel up and running. He asked his fellow keyboard banging friends what was in their batman utility belt of hardware and software… 5 months later… I obliged. Skitch. Why Saying This Four-Letter Word Can Transform Your Productivity. Perfectionists are often reminded that "done is better than perfect. 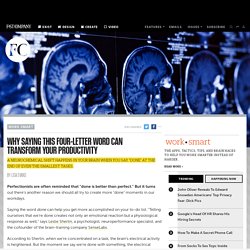 " But it turns out there’s another reason we should all try to create more "done" moments in our workdays. Saying the word done can help you get more accomplished on your to-do list. "Telling ourselves that we’re done creates not only an emotional reaction but a physiological response as well," says Leslie Sherlin, a psychologist, neuroperformance specialist, and the cofounder of the brain-training company SenseLabs. According to Sherlin, when we’re concentrated on a task, the brain’s electrical activity is heightened. But the moment we say we’re done with something, the electrical activity in our brain shifts from being activated and engaged into a more relaxed state.

A neurochemical shift in the brain occurs simultaneously. 20 Practices That Can Make You Super Productive! Big data study finds most productive people work in sprints: 52 minutes, rest for 17. A new big data study claims to have found a formula for ultimate productivity: work 52 consecutive minutes and then ditch the computer for 17 minutes of rest. 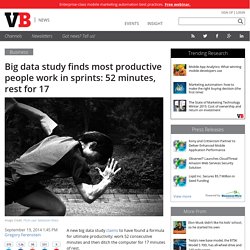 Worker productivity monitoring company, DeskTime, sorted through volumes of data on how quickly workers performed tasks and found interesting patterns in the elite, Olympic athletes of the office. “The reason the most productive 10% of our users are able to get the most done during the comparatively short periods of working time is that their working times are treated as sprints,” wrote Julia Gifford at the DeskTime Blog. DeskTime’s results can’t be compared to the results found in university research: First, DeskTime has a limited population, and it can only make claims about the kinds of companies that willingly buy its software. Second, averages tend to give us misleading precision. Just like the average family does not have 2.5 children, few if any people experiences their maximum productivity time in exactly 52 minutes. The Science of Productivity: How to Get More Done in a Day. Time is our scarcest resource, yet we spend so much of it doing things that are unproductive -- usually without meaning to. 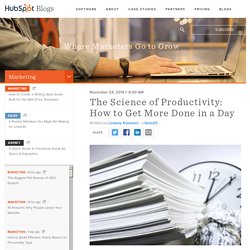 The average person wastes 31 hours in unproductive meetings according to Atlassian. And a McKinsey study shows we spend an average of 13 hours per week reading, writing, or responding to email. 15 Time Management Apps and Tools That Will Supercharge Your Productivity. No one can dispute the countless benefits technology has brought us. 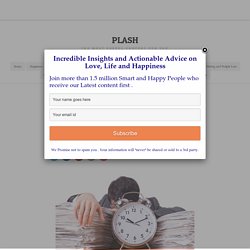 It has undoubtedly allowed us to connect, perform, improve and leverage our resources beyond what was once imaginable. We all make daily use of a wide variety of different tools and devices to make life easier and more comfortable. How many tools and apps are you currently using to optimize your time? If you are not taking advantage of the hundreds of apps and tools out there, you are certainly missing out. 14 Clever Email Hacks for Productivity and Efficiency. 99 Resources for Personal Productivity. Lifehacker: The Index. Lifehacker - Tips and downloads for getting things done. 22 Life-changing Tips on How To Phenomenally Boost Your Productivity. The Secret to Productivity: Focus. Technology has helped us do so much more, so much faster. But many experts argue that work-related systems and tools haven’t necessarily made us more productive.

How many times does your phone, tablet or computer chime to indicate email or a Facebook notification? The reality is that while technology has the ability to improve productivity, too many people allow it to distract. 50 Tricks to Get Things Done Faster, Better, and More Easily. Productivity Strategies. 10 Laws of Productivity. You might think that creatives as diverse as Internet entrepreneur Jack Dorsey, industrial design firm Studio 7.5, and bestselling Japanese novelist Haruki Murakami would have little in common. In fact, the tenets that guide how they – and exceptionally productive creatives across the board – make ideas happen are incredibly similar.

How to Become a Productivity Ninja. Believe it or not, productivity can be learned, grasshopper. Yeah, I didn’t believe it either..until I transformed myself into a productivity ninja. Today, I’m going to teach you to maximize your time at your computer, dominate your email in-box, and spend less time on unimportant tasks to focus on what really matters. Once you have freed up your time, you’ll be surprised how you’re able to hang out with friends and family, pick up new skills, spend more time exercising, or cook healthy meals.

Like Neo learning Kung Fu, today I shall teach you the skill of productivity. My story I am the world’s best procrastinator. Boost Your Productivity By Quitting These 10 Everyday Habits That's Ruining Your Productivity. Being productive isn’t easy, regardless of how badly you’d like to be and how hard you think you’re willing to work. But increasing your output at work and in life is a much more attainable goal if you’re not sabotaging yourself with bad habits. Here are 10 things that are ruining your productivity and you should stop doing right now: 1.

How to Be More Productive and Eliminate Time-Wasting Activities by Using the 'Eisenhower Box'  Dwight Eisenhower lived one of the most productive lives you can imagine. Eisenhower was the 34th president of the United States, serving two terms from 1953 to 1961. During his time in office, he launched programs that directly led to the development of the Interstate Highway System in the United States, the launch of the Internet (DARPA), the exploration of space (NASA), and the peaceful use of alternative energy sources (Atomic Energy Act).

Before becoming president, Eisenhower was a five-star general in the United States Army, served as the Supreme Commander of the Allied Forces in Europe during World War II, and was responsible for planning and executing invasions of North Africa, France, and Germany. The Zeigarnik effect: uncompleted tasks stay in mind until you finish them. If you, like us, are constantly looking for more efficient ways to work, then you will really appreciate what the Zeigarnik effect has to offer. It carries the name of Bluma Zeigarnik, a Lithuanian-born psychologist who first described this effect in her doctoral thesis in the late 1920s. Some accounts have it that Zeigarnik noticed this effect while she was watching waiters in a restaurant.

The waiters seemed to remember complex orders that allowed them to deliver the right combination of food to the tables, yet the information vanished as the food was delivered. Zeigarnik observed that the uncompleted orders seemed to stick in the waiters’ minds until they were actually completed. Bluma Zeigarnik, 1921. Zeigarnik didn’t leave it at that, though.