Reality Is Nothing But a Hallucination: A Mind-Bending Crash Course on the Neuroscience of Consciousness. If you've been accused of living in "a world of your own," get ready for some validation. 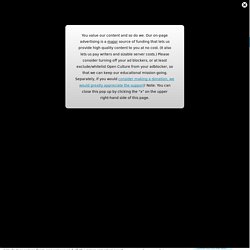 As cognitive scientist Anil Seth argues in "Your Brain Hallucinates Your Conscious Reality," the TED Talk above, everyone lives in a world of their own — at least if by "everyone" you mean "every brain," by "world" you mean "entire reality," and by "of their own" you mean "that it has created for itself. " With all the signals it receives from our senses and all the prior experiences it has organized into expectations, each of our brains constructs a coherent image of reality — a "multisensory, panoramic 3D, fully, immersive inner movie" — for us to perceive. "Perception has to be a process of 'informed guesswork,'" says the TED Blog's accompanying notes, "in which sensory signals are combined with prior expectations about the way the world is, to form the brain’s best guess of the causes of these signals.

" Related Content: Free Online Psychology & Neuroscience Courses. A Novel Theory for Why Humans Evolved Selves. The human brain is naturally self-centered: Given no tasks to attend to, the neuroscience research indicates, it will turn inward, wandering through memories of the past and prospecting toward the future. 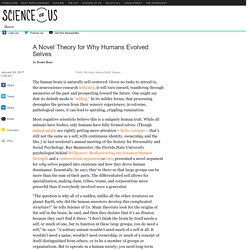 One might say that its default mode is “selfing.” In its milder forms, that processing decouples the person from their sensory experiences; in extreme, pathological cases, it can lead to spiraling, crippling rumination. Most cognitive scientists believe this is a uniquely human trait. While all animals have bodies, only humans have fully formed selves. (Though animal minds are rightly getting more attention – hello, octopus – that’s still not the same as a self, with continuous identity, ownership, and the like.)

Self-Perception. The Unconscious. Thinking. Consciousness. Representation of consciousness from the seventeenth century At one time consciousness was viewed with skepticism by many scientists, but in recent years it has become a significant topic of research in psychology, neuropsychology and neuroscience. 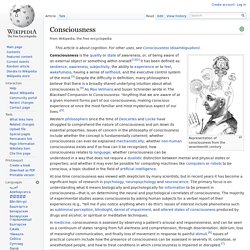 The primary focus is on understanding what it means biologically and psychologically for information to be present in consciousness—that is, on determining the neural and psychological correlates of consciousness. The majority of experimental studies assess consciousness by asking human subjects for a verbal report of their experiences (e.g., "tell me if you notice anything when I do this"). Issues of interest include phenomena such as subliminal perception, blindsight, denial of impairment, and altered states of consciousness produced by drugs and alcohol, or spiritual or meditative techniques. Etymology and early history[edit] John Locke, British philosopher active in the 17th century In the dictionary[edit] Philosophy of mind[edit] Understanding consciousness: Researchers advocate for more scientific research on consciousness. Why does a relentless stream of subjective experiences normally fill your mind? 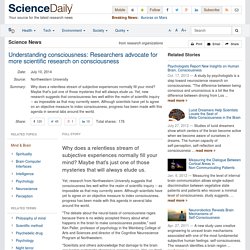 Maybe that's just one of those mysteries that will always elude us. Yet, research from Northwestern University suggests that consciousness lies well within the realm of scientific inquiry -- as impossible as that may currently seem. Although scientists have yet to agree on an objective measure to index consciousness, progress has been made with this agenda in several labs around the world.

Consciousness as a Self-Organizing Process. Allan Combs University of North Carolina at Asheville Saybrook Graduate School sourceintegralis.org Sally Goerner Triangle Center for the Study of Complex Systems 374 Wesley Court, Chapel Hill, NC 27515 Abstract The evolution of consciousness is seen in the context of energy driven evolution in general, where energy and information are understood as two sides of the same coin. 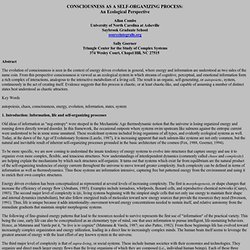 From this perspective consciousness is viewed as an ecological system in which streams of cognitive, perceptual, and emotional information form a rich complex of interactions, analogous to the interactive metabolism of a living cell. The result is an organic, self-generating, or autopoietic, system, continuously in the act of creating itself. Key Words. Lucid dreamers help scientists locate the seat of meta-consciousness in the brain. Studies of lucid dreamers show which centers of the brain become active when we become aware of ourselves in dreams. 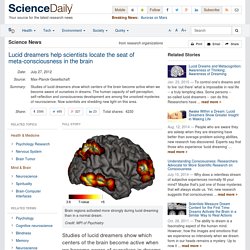 Which areas of the brain help us to perceive our world in a self-reflective manner is difficult to measure. During wakefulness, we are always conscious of ourselves. Consciousness Does Not Reside Here. WHAT IS THE RELATION between selective attention and consciousness? 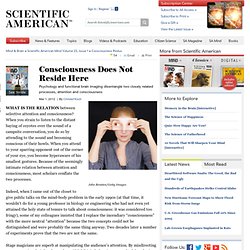 Dan Dennett: The illusion of consciousness. Consciousness after decapitation. How long is a severed head conscious for? 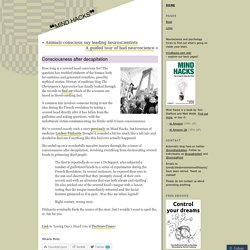 The question has troubled students of the human body for centuries and generated countless, possibly mythical stories. History of medicine blog The Chirurgeon’s Apprentice has finally looked through the records to find out which of the accounts are based in blood-curdling fact. A common tale involves someone trying to test the idea during the French revolution by taking a severed head directly after it has fallen from the guillotine and asking questions, with the unfortunate victim communicating via blinks until it loses consciousness. We’ve covered exactly such a story previously on Mind Hacks, but historian of medicine Lindsey Fitzharris thought it sounded a bit too much like a tall tale and decided to find out if anything like this had ever actually happened.

Why you probably won’t experience your own traumatic death. Banishing consciousness: the mystery of anaesthesia - health - 29 November 2011. Read full article Continue reading page |1|2|3 I WALK into the operating theatre feeling vulnerable in a draughty gown and surgical stockings. 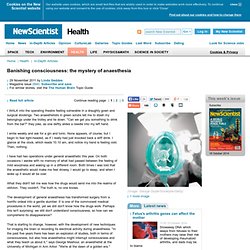 Two anaesthetists in green scrubs tell me to stash my belongings under the trolley and lie down. "Can we get you something to drink from the bar? " they joke, as one deftly slides a needle into my left hand. I smile weakly and ask for a gin and tonic. I have had two operations under general anaesthetic this year.

What they didn't tell me was how the drugs would send me into the realms of oblivion. Elusive On/Off Switch Found for Human Consciousness. When I was a child about nine years old or so, I embarked on a mission to discover the barrier between waking and sleeping. 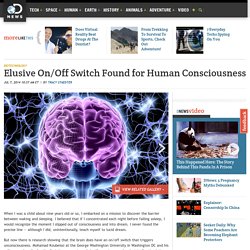 I believed that if I concentrated each night before falling asleep, I would recognize the moment I slipped out of consciousness and into dream. I never found the precise line — although I did, unintentionally, teach myself to lucid dream. But now there is research showing that the brain does have an on/off switch that triggers unconsciousness. New tool can switch neural behavior 'on' and 'off' Synopsis Scientists have perfected a noninvasive "chemogenetic " technique that allows them to switch off a specific behavior in mice - such as voracious eating - and then switch it back on. Summary The method works by targeting two different cell surface receptors of neurons that are responsible for triggering the specific chemical signals that control brain function and complex behaviors.When this complex signaling system goes awry, the results can lead to a plethora of diseases, including schizophrenia, depression, Alzheimer’s Disease, Parkinson’s Disease, eating disorders, and epilepsy.

Cell surface receptors also play roles in cancers, diabetes, digestive conditions, and other diseases. Scientific evidence for survival of consciousness after death. According to Wikipedia.org, "psychometry" is a psychic ability in which the user is able to relate details about the past condition of an object or area, usually by being in close contact with it. The user could allegedly, for example, give police precise details about a murder or other violent crime if they were at the crime scene or were holding the weapon used. About.com's Paranormal Phenomena website lists information about several of the most convincing psychometrists. Stefan Ossowiecki, a Russian-born psychic, is one of the most famous psychometrists. Ossowiecki claimed to be able to see people's auras and to move objects through psychokinesis.

His psychic gifts enabled this chemical engineer to locate lost objects and missing people, and he assisted in several criminal investigations. 10 Scientific Studies That Prove Consciousness Can Alter Our Physical World. Scientists Claim That Quantum Theory Proves Consciousness Moves To Another Universe At Death. Learning Mind| A book titled “Biocentrism: How Life and Consciousness Are the Keys to Understanding the Nature of the Universe“ has stirred up the Internet, because it contained a notion that life does not end when the body dies, and it can last forever. The author of this publication, scientist Dr. Robert Lanza who was voted the 3rd most important scientist alive by the NY Times, has no doubts that this is possible. Beyond time and space Lanza is an expert in regenerative medicine and scientific director of Advanced Cell Technology Company.

Before he has been known for his extensive research which dealt with stem cells, he was also famous for several successful experiments on cloning endangered animal species. But not so long ago, the scientist became involved with physics, quantum mechanics and astrophysics. Why Physicists Are Saying Consciousness Is A State Of Matter, Like a Solid, A Liquid Or A Gas — The Physics arXiv Blog.

There’s a quiet revolution underway in theoretical physics. Phenomenology (psychology) The quality or nature of a given experience is often referred to by the term qualia, whose archetypical exemplar is "redness". For example, we might ask, "Is my experience of redness the same as yours? " While it is difficult to answer such a question in any concrete way, the concept of intersubjectivity is often used as a mechanism for understanding how it is that humans are able to empathise with one another's experiences, and indeed to engage in meaningful communication about them.

Theory of mind. In the Shadow of Hegel: How Does Thought Arise Out of Matter? What's the Big Idea? Before neuroscience and quantum physics, there was Georg Wilhelm Friedrich Hegel. How The Mind Really Works: 10 Counterintuitive Psychology Studies. David Anderson: Your brain is more than a bag of chemicals.

Is Free Will an Illusion? - The Chronicle Review. Free will has long been a fraught concept among philosophers and theologians. Now neuroscience is entering the fray. Science is showing how the brain's development affects free will. Neuroscience Proves (However Reluctantly) That We Have Free Will. By Orion Jones.

Related:  Nuerobiology   -  The human brain and the mind   -  Chapter Four The Future is a foreign country   -  Consciousness   -  Scientific evidence for survival of consciousness after death   -  Scientists Claim That Quantum Theory Proves Consciousness Moves To Another Universe At Death   -  Theory of mind   -  How The Mind Really Works: 10 Counterintuitive Psychology Studies   -  Education   -  Enterprise