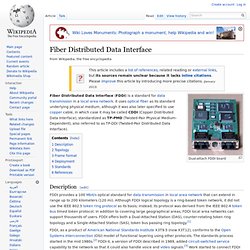 It uses optical fiber as its standard underlying physical medium, although it was also later specified to use copper cable, in which case it may be called CDDI (Copper Distributed Data Interface), standardized as TP-PMD (Twisted-Pair Physical Medium-Dependent), also referred to as TP-DDI (Twisted-Pair Distributed Data Interface). Description[edit] FDDI provides a 100 Mbit/s optical standard for data transmission in local area network that can extend in range up to 200 kilometers (120 mi). Although FDDI logical topology is a ring-based token network, it did not use the IEEE 802.5 token ring protocol as its basis; instead, its protocol was derived from the IEEE 802.4 token bus timed token protocol. In addition to covering large geographical areas, FDDI local area networks can support thousands of users. Topology[edit] Frame format[edit] The FDDI data frame format is:

RFC 893 - Trailer encapsulations. Category:Link protocols. From Wikipedia, the free encyclopedia This category contains link protocols used in the Data Link Layer (Layer 2) of the OSI model and the Link Layer of the Internet Protocol Suite. 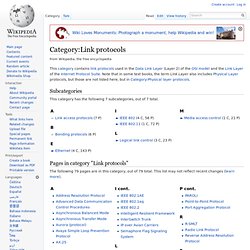 Note that in some text books, the term Link Layer also includes Physical Layer protocols, but those are not listed here, but in Category:Physical layer protocols. Subcategories This category has the following 7 subcategories, out of 7 total. Pages in category "Link protocols" The following 79 pages are in this category, out of 79 total. Integrated Services Digital Network. ISDN is a circuit-switched telephone network system, which also provides access to packet switched networks, designed to allow digital transmission of voice and data over ordinary telephone copper wires, resulting in potentially better voice quality than an analog phone can provide. 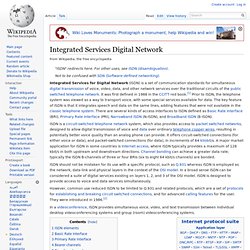 It offers circuit-switched connections (for either voice or data), and packet-switched connections (for data), in increments of 64 kilobit/s. A major market application for ISDN in some countries is Internet access, where ISDN typically provides a maximum of 128 kbit/s in both upstream and downstream directions. Channel bonding can achieve a greater data rate; typically the ISDN B-channels of three or four BRIs (six to eight 64 kbit/s channels) are bonded. ISDN should not be mistaken for its use with a specific protocol, such as Q.931 whereas ISDN is employed as the network, data-link and physical layers in the context of the OSI model.

ISDN elements[edit] Basic Rate Interface[edit] Bearer channels[edit] Media access control. Functions performed in the MAC sublayer[edit] According to IEEE Std 802-2001 section 6.2.3 "MAC sublayer", the primary functions performed by the MAC layer are:[1] Frame delimiting and recognitionAddressing of destination stations (both as individual stations and as groups of stations)Conveyance of source-station addressing informationTransparent data transfer of LLC PDUs, or of equivalent information in the Ethernet sublayerProtection against errors, generally by means of generating and checking frame check sequencesControl of access to the physical transmission medium In the case of Ethernet, according to 802.3-2002 section 4.1.4, the functions required of a MAC are:[2] 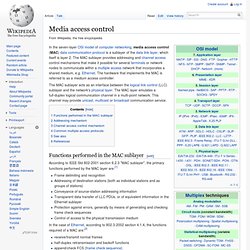 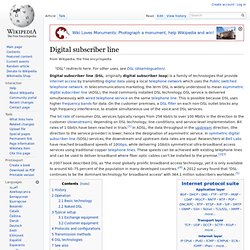 In telecommunications marketing, the term DSL is widely understood to mean asymmetric digital subscriber line (ADSL), the most commonly installed DSL technology. DSL service is delivered simultaneously with wired telephone service on the same telephone line. This is possible because DSL uses higher frequency bands for data. On the customer premises, a DSL filter on each non-DSL outlet blocks any high frequency interference, to enable simultaneous use of the voice and DSL services. A 2007 book described DSL as "the most globally prolific broadband access technology, yet it is only available to around 60–75 percent of the population in many developed countries. Point-to-Point Protocol. PPP is used over many types of physical networks including serial cable, phone line, trunk line, cellular telephone, specialized radio links, and fiber optic links such as SONET. 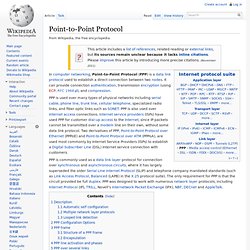 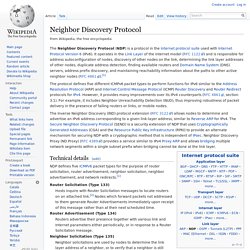