The science is pouring in: You’re probably eating Roundup herbicide in “excessive” levels. (Natural News) How much Roundup have you consumed this week? 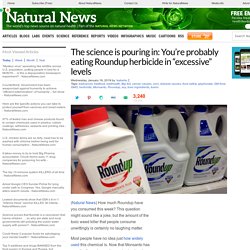 This question might sound like a joke, but the amount of the toxic weed killer that people consume unwittingly is certainly no laughing matter. Most people have no idea just how widely used this chemical is. Now that Monsanto has genetically engineered crops to stand up to heavy doses of the chemical, it’s being sprayed on more food crops than ever. It is then taken up into the plants that we eat – as do the farm animals that we often end up eating as well. According to a study by Norwegian scientists, American soy crops contain excessive glyphosate levels inside the food crop. Dozens more breakfast foods test positive for trace amounts of weed killer, report says. 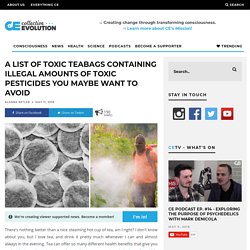 Become a member! There’s nothing better than a nice steaming hot cup of tea, am I right? I don’t know about you, but I love tea, and drink it pretty much whenever I can and almost always in the evening. Tea can offer so many different health benefits that give you antioxidants and nutrients, can boost the immune system, help burn fat, aid in digestion and even protect against cancer. All these benefits you may miss out on if your tea just happens to be soaked in toxic pesticides like most generic brands are, unfortunately.

CBC News conducted an investigation to test the pesticide levels in some of the most major-tea brands that we see in supermarkets, at restaurants and what many of us have in our homes. Pesticides Linked To A Variety Of Ailments Numerous studies have revealed that various pesticides are linked to cancer, ADHD, Alzheimer’s disease, reproductive issues, birth defects and more. The Most Toxic Tea Brands Toxic Tea Bags. FDA hid glyphosate findings from the public after finding weed killer contamination in nearly ALL food. Toxins in Seafood. By Dr. 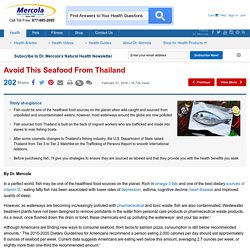 Mercola In a perfect world, fish may be one of the healthiest food sources on the planet. Rich in omega-3 fats and one of the best dietary sources of vitamin D,1 eating fatty fish has been associated with lower rates of depression, asthma, cognitive decline, heart disease and improved quality of sleep. However, as waterways are becoming increasingly polluted with pharmaceutical and toxic waste, fish are also contaminated. Wastewater treatment plants have not been designed to remove pollutants in the water from personal care products or pharmaceutical waste products.

Although Americans are finding new ways to consume seafood, from tacos to salmon pizza, consumption is still below recommended amounts.4 The 2015-2020 Dietary Guidelines for Americans recommend a person eating 2,000 calories per day should eat approximately 8 ounces of seafood per week. The U.S. Thailand’s Fishing Industry Fueled by Human Trafficking and Slave Labor Change Has Been Mostly Cosmetic According to the U.S. TOXIC FOOD is killing humanity: One-fifth of global deaths now linked to processed junk food and toxic ingredients. 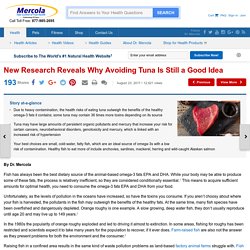 Mercola Fish has always been the best dietary source of the animal-based omega-3 fats EPA and DHA. While your body may be able to produce some of these fats, the process is relatively inefficient, so they are considered conditionally essential.1 This means to acquire sufficient amounts for optimal health, you need to consume the omega-3 fats EPA and DHA from your food. Unfortunately, as the levels of pollution in the oceans have increased, so have the toxins you consume. If you aren’t choosy about where your fish is harvested, the pollutants in the fish may outweigh the benefits of the healthy fats. In the 1980s the popularity of orange roughy exploded and led to driving it almost to extinction. Raising fish in a confined area results in the same kind of waste pollution problems as land-based factory animal farms struggle with.

Why Tuna Is Best Avoided Historically, tuna has been a very popular fish, and among the most widely consumed. POPs Are a Serious Health Threat. Dangers of Hidden Poisons in Your Food. By Dr. 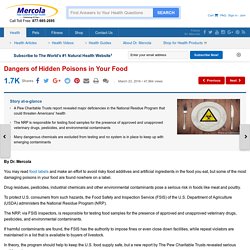 Mercola You may read food labels and make an effort to avoid risky food additives and artificial ingredients in the food you eat, but some of the most damaging poisons in your food are found nowhere on a label. Drug residues, pesticides, industrial chemicals and other environmental contaminants pose a serious risk in foods like meat and poultry. To protect U.S. consumers from such hazards, the Food Safety and Inspection Service (FSIS) of the U.S. Department of Agriculture (USDA) administers the National Residue Program (NRP). The NRP, via FSIS inspectors, is responsible for testing food samples for the presence of approved and unapproved veterinary drugs, pesticides, and environmental contaminants.

Dangers of Hidden Poisons in Your Food. Caution: Salmon From This Region Contains Cocaine And Prescription Drugs.