Reimagining the Periodic Table. In their element: women of the periodic table. In March 1869, the Russian chemist Dmitri Mendeleev presented his periodic system to the Russian Academy of Sciences (Gordin, 2004). 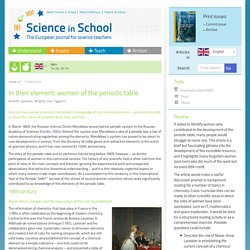 Behind this system was Mendeleev’s idea of a periodic law: a law of nature demonstrating regularities among the elements. Mendeleev’s system has proved to be robust to new developments in science, from the discovery of noble gases and radioactive elements to the world of quantum physics, and it has now reached its 150th anniversary. The story of the periodic table and its elements started long before 1869, however – as did the participation of women in this communal venture.

The history of any scientific field is often told from the point of view of the main concepts and theories, ignoring the experimental work and unexpected observations that led to this theoretical understanding – and it is this relatively neglected aspect to which many women made major contributions. 18th century Marie-Anne Lavoisier and the new notion of the chemical element 19th century. Chemical Party Extended Widescreen. What is chemiluminescence? Glowing jellyfish, flickering fireflies, fun glow sticks; Emma Welsh introduces the beautiful and mysterious world of chemiluminescence. 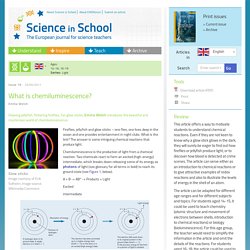 Fireflies, jellyfish and glow sticks – one flies, one lives deep in the ocean and one provides entertainment in night clubs. What is the link? The answer is some intriguing chemical reactions that produce light. Chemiluminescence is the production of light from a chemical reaction. Two chemicals react to form an excited (high-energy) intermediate, which breaks down releasing some of its energy as photons of light (see glossary for all terms in bold) to reach its ground state (see Figure 1, below).

A + B -> AB* -> Products + Light Excited intermediate Chemiluminescent reactions do not usually release much heat, because energy is released as light instead.

Fun physics in school: students perform for students. Herbi Dreiner and Tobias Strehlau describe how a university physics show inspired a secondary-school teacher and his students to perform their own school physics show. 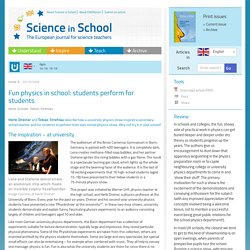 Why not try it in your school? The inspiration – at university The auditorium of the Amos Comenius Gymnasium in Bonn, Germany, is packed with 400 teenagers. It is completely dark; Lena creates methane-filled soap bubbles, and her partner Stefanie ignites the rising bubbles with a gas flame. The result is a spectacular burning gas cloud, which lights up the whole stage and the beaming faces of the audience. This project was initiated by Werner Urff, physics teacher at the high school, and Herbi Dreiner, a physics professor at the University of Bonn. Like most German university physics departments, the Bonn department has a collection of experiments suitable for lecture demonstration: typically large and impressive, they reveal particular physical phenomena. What happens next? A teaching strategy to get students of all ages talking. David Featonby, from the UK, presents some simple demonstrations to get your students thinking about scientific principles. 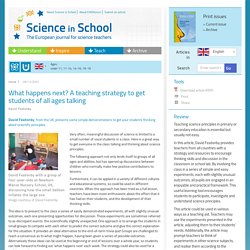 Very often, meaningful discussion of science is limited to a small number of vocal students in a class. Here is a great way to get everyone in the class talking and thinking about science principles. The following approach not only lends itself to groups of all ages and abilities, but has opened up discussions between children who normally make few positive contributions to lessons. Furthermore, it can be applied in a variety of different cultures and educational systems, so could be used in different countries. When the approach has been tried as a full lesson, teachers have been most enthusiastic about the effect that it has had on their students, and the development of their thinking skills.

Every teacher strives to make a long-term difference in the lives of children who attend their classrooms. 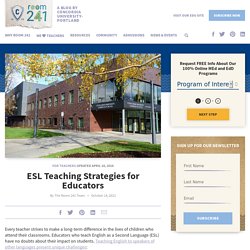 Educators who teach English as a Second Language (ESL) have no doubts about their impact on students. Teaching English to speakers of other languages present unique challenges: Due to limited vocabulary range or nervousness, students may struggle to communicate or explain their confusion in full detail.Limited literacy in a native language (L1) can create an obstacle for literacy in a second language (L2).Cultural norms or classroom routines, such as raising your hand or brainstorming, are foreign concepts and acclimation requires time. ESL teachers need a toolkit of workable teaching strategies.