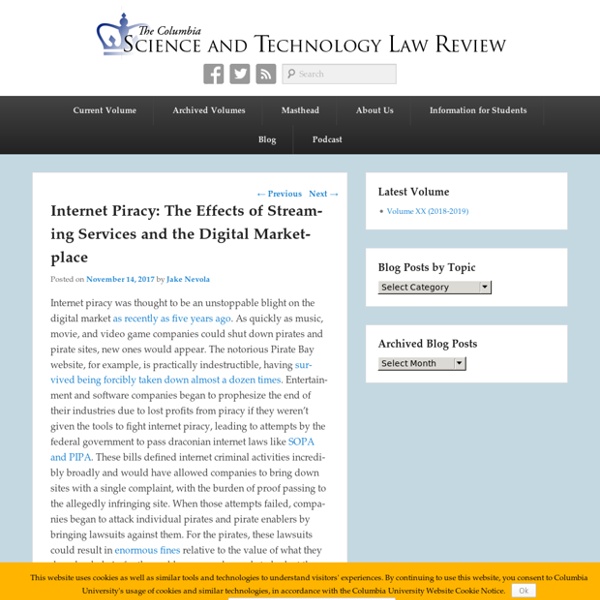 Is internet piracy a bad thing? Piracy is bad We would be robbing the company of their profits. Put yourself in their shoes. You would really feel frustrated right?So, you need to understand how they feel. The Psychology of Online Comments Several weeks ago, on September 24th, Popular Science announced that it would banish comments from its Web site. The editors argued that Internet comments, particularly anonymous ones, undermine the integrity of science and lead to a culture of aggression and mockery that hinders substantive discourse. “Even a fractious minority wields enough power to skew a reader’s perception of a story,” wrote the online-content director Suzanne LaBarre, citing a recent study from the University of Wisconsin-Madison as evidence.

Internet Piracy Internet piracy of software and content products can take many forms: Auction Site Piracy Classified Ad Sites Newsgroups Piracy FTP (File Transfer Protocol) Sites P2P (Peer-to-Peer) Torrent Sites Sharehosting Sites IRC (Internet Relay Chat) Cracks/Serials Sites Auction Site Piracy Auction site piracy occurs when the seller offers software and/or content on physical media for sale in an online auction. Social Media Cyber Bullying Linked to Teen Depression Cyberbullying on social media is linked to depression in teenagers, according to new research that analyzed multiple studies of the online phenomenon. Victimization of young people online has received an increasing level of scrutiny, particularly after a series of high-profile suicides of teenagers who were reportedly bullied on various social networks. In 2013, for example, a spate of suicides was linked to the social network Ask.fm, where users can ask each other questions anonymously. The deaths of teens who had been subject to abuse on the site prompted Ask.fm (which was acquired by Ask.com in 2014) to launch new safety efforts. Twitter, likewise, announced plans in April to filter out abusive tweets and suspend bullying users.

FOMO Addiction: The Fear of Missing Out The fear of missing out (FOMO) has become pervasive in society. Teens and adults text while driving, because the possibility of a social connection is more important than their own lives (and the lives of others). They interrupt one call to take another, even when they don’t know who’s on the other line (but to be honest, we’ve been doing this for years before caller ID).

Internet Piracy Internet piracy of software and content products can take many forms: Auction Site Piracy Classified Ad Sites Newsgroups Piracy FTP (File Transfer Protocol) Sites P2P (Peer-to-Peer) Torrent Sites Sharehosting Sites IRC (Internet Relay Chat) Cracks/Serials Sites Auction Site Piracy Auction site piracy occurs when the seller offers software and/or content on physical media for sale in an online auction. Internet Pirates Will Always Win STOPPING online piracy is like playing the world’s largest game of Whac-A-Mole. Hit one, countless others appear. Quickly. And the mallet is heavy and slow. Take as an example YouTube, where the Recording Industry Association of America almost rules with an iron fist, but doesn’t, because of deceptions like the one involving a cat. YouTube, which is owned by Google, offers a free tool to the movie studios and television networks called Content ID.

Europe Has The Highest Online Piracy Rates, By Far An in-depth analysis of billions of worldwide visits to torrent, streaming and download sites has revealed that Europe is a hotbed for piracy. The piracy rate is the highest in Latvia, where nearly half of the population visits pirate sites, and the entire global top ten is made up of European countries. Despite the growing availability of legal options, online piracy remains rampant. Every day pirate sites are visited hundreds of millions of times. Piracy tracking outfit MUSO has documented the piracy landscape with data from 14,000 of the largest global piracy sites.

Cyberbullying Bullies and mean girls have been around forever, but technology now gives them a whole new platform for their actions. The old "sticks and stones" saying is no longer true — both real-world and online name-calling can have serious emotional consequences for our kids and teens. It's not always easy to know how and when to step in as a parent. For starters, most kids use technology differently than we do. They're playing games online and sending texts on their phones at an early age, and most teens have devices that keep them constantly connected to the Internet. Many are logged on to Facebook or Tumblr and chatting or texting all day.

Smartphone addiction creates imbalance in brain, study suggests Researchers have found an imbalance in the brain chemistry of young people addicted to smartphones and the internet, according to a study presented today at the annual meeting of the Radiological Society of North America (RSNA). According to a recent Pew Research Center study, 46 percent of Americans say they could not live without their smartphones. While this sentiment is clearly hyperbole, more and more people are becoming increasingly dependent on smartphones and other portable electronic devices for news, information, games, and even the occasional phone call.

Online disinhibition and the psychology of trolling Dunechaser/Flickr/CC BY-NC-SA 2.0 In everyday life, decorum dictates that certain things just don't happen. Funerals, even for divisive figures tend to go by with solemn respect. Compare this with a recent example of online trolling at its most extreme: In 2011, a Reading man was jailed for raiding the Facebook tribute pages of a 14 year old girl who had committed suicide, filling it with crass jokes and insults. He had never met the girl in question. What is Internet software piracy? Webopedia Definition Main » TERM » I » By Vangie Beal A type of software piracy that occurs when software, which is illegally obtained through Internet channels, usually through peer-to-peer file sharing systems or downloaded from pirate Web sites that make software available for download for free or in exchange for users who uploaded software.

How to manage your online reputation for free Just a few years ago, much of what we did was soon forgotten. But thanks largely to social media, now we do. Misspelled Tweets, Facebook rants after you've had a bad day, and unflattering photos posted by your friends have made it difficult to manage your online reputation, especially when it's archived for posterity. And it's not just about keeping a lid on the past or your online mistakes -- it's also about making yourself look confident, capable, and Internet-savvy.