A to Z World Culture. World Cultures. 8 Writing Techniques to Win You a Pulitzer. Today’s guest post is from writer Joe Bunting, who blogs at The Write Practice. 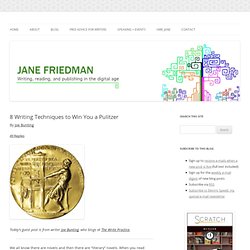 We all know there are novels and then there are “literary” novels. When you read Margaret Atwood, it just feels different than when you read Tom Clancy. And for some reason, these literary novels are the ones that win all the most prestigious awards like the Pulitzer Prize, the Man Booker Prize, and the Nobel Prize for Literature. Literary authors are known for their unique voices and experimental styles.

How a Scene List Can Change Your Novel-Writing Life. By the end of this post you will have a nagging urge to use an excel spreadsheet. 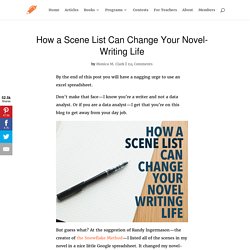 Don’t make that face—I know you’re a writer and not a data analyst. Or if you are a data analyst—I get that you’re on this blog to get away from your day job. But guess what? At the suggestion of Randy Ingermason—the creator of the Snowflake Method—I listed all of the scenes in my novel in a nice little Google spreadsheet. It changed my novel-writing life, and doing the same will change yours too. TypWrittr - free distraction-free minimalistic text editor for writers. Writing prompts. Ten Things That Make an Editor Stop Reading Your Manuscript — Elizabeth Law Reads. Periodic Table of Storytelling. Stephen King On How To Write. 25 Things You Should Know About Plot.

Previous iterations of the “25 Things” series: 25 Things Every Writer Should Know. 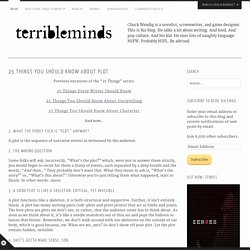 How To Create An Intriguing Inciting Incident. Every single element between the first page and the very last page of a screenplay is arguably the most important, salable thing about it. 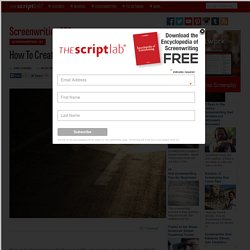 In this article, the beginning of the plot takes the number one spot. However, the plot really can’t begin being awesome until it is set in motion. That’s where the inciting event comes in. Elements of Suspense in Writing: 6 Secret to Creating and Sustaining Suspense. Thriller writing? 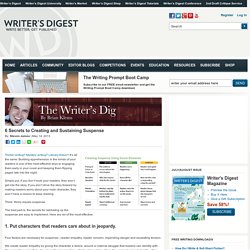 Mystery writing? Literary fiction? It’s all the same: Building apprehension in the minds of your readers is one of the most effective keys to engaging them early in your novel and keeping them flipping pages late into the night. Simply put, if you don’t hook your readers, they won’t get into the story. 41 WAYS TO CREATE AND HEIGHTEN SUSPENSE. According to top New York literary agent Noah Lukeman (The Plot Thickens), if a writer can maintain suspense throughout the story, many readers will keep reading even if the characters are undeveloped and the plot is weak. 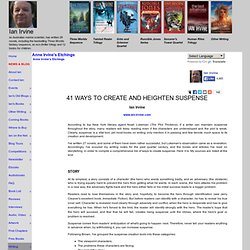 Clearly, suspense is a vital tool, yet most books on writing only mention it in passing and few devote much space to its creation and development. How Writers Create Suspense.pdf. Plot Development: How to write the climax and ending of your novel. By Glen C. 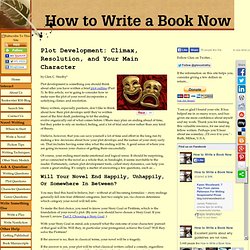 Strathy* Plot development is something you should think about after you have written a brief plot outline (Part 3). In this article, we're going to consider how to make sure the plot of your novel incorporates a satisfying climax and resolution. Many writers, especially pantsers, don't like to think about how their plot develops until they've written most of the first draft, preferring to let the ending evolve organically out of what comes before. Nabokov on Inspiration and the Six Short Stories Everyone Should Read.

By Maria Popova “A prefatory glow, not unlike some benign variety of the aura before an epileptic attack, is something the artist learns to perceive very early in life.” 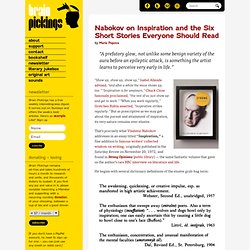 “Show up, show up, show up,” Isabel Allende advised, “and after a while the muse shows up, too.” “Inspiration is for amateurs,” Chuck Close famously proclaimed, “the rest of us just show up and get to work.” “When you work regularly,” Gretchen Rubin asserted, “inspiration strikes regularly.” But as prescriptive as we may get about the pursuit and attainment of inspiration, its very nature remains ever-elusive.

That’s precisely what Vladimir Nabokov addresses in an essay titled “Inspiration,” a fine addition to famous writers’ collected wisdom on writing, originally published in the Saturday Review on November 20, 1972, and found in Strong Opinions (public library) — the same fantastic volume that gave us the author’s rare BBC interview on literature and life. Fight Scenes 101. Find Your Voice in Writing With These Tips From How to Be A Writer. Whether you write fiction, nonfiction, or a blog–it’s important to have a unique voice in writing, or style. 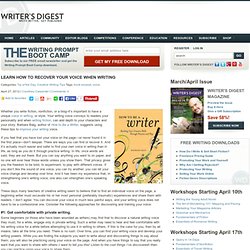 Your writing voice conveys to readers your personality and when writing fiction, can add depth to your characters and your story. Barbara Baig, author of How to Be a Writer, suggests using these tips to improve your writing voice. If you feel that you have lost your voice on the page—or never found it in the first place—don’t despair. There are ways you can find or recover it. 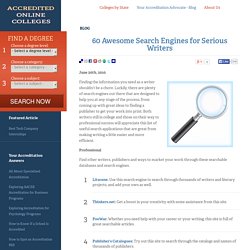 WriteWorld. How to write a novel* Ever wanted to write a novel but had no clue how? Having just finished my fifth novel, I am now ready to pass on my accummulated novel-writing wisdom to those what have never writ one but wants to. Here is the complete, full and unexpurgated guide: First of all you need a computer. (Yeah, yeah, I know in the olden days they made do with quill, ink and paper, and typewriters—aargh! 25 Things Every Writer Should Know. An alternate title for this post might be, “Things I Think About Writing,” which is to say, these are random snidbits (snippets + tidbits) of beliefs I hold about what it takes to be a writer.

I hesitate to say that any of this is exactly Zen (oh how often we as a culture misuse the term “Zen” — like, “Whoa, that tapestry is so cool, it’s really Zen“), but it certainly favors a sharper, shorter style than the blathering wordsplosions I tend to rely on in my day-to-day writing posts. Anyway. Peruse these. Absorb them into your body. Say It Out Loud: How David Sedaris Makes His Writing Better. With social networking tools and access to e-reader data, 21st-century authors have unlimited opportunities for feedback before a book is indelibly inked. But best-selling, award-winning humorist David Sedaris, whose new essay collection Let’s Explore Diabetes with Owls will be published by Little, Brown and Company this month, prefers a more low-tech approach.

He tests pre-publication material by regularly reading works in progress to live audiences, a practice that has become an integral part of his writing process. Sedaris got his first taste of reading to an audience in college. He was later discovered by This American Life radio producer Ira Glass while reading his work in a Chicago club and has since read to sold-out audiences at Carnegie Hall and across the country as well as live on the Late Show with David Letterman. Catching Mistakes. 100 Little Ways You Can Dramatically Improve Your Writing.

How Does Writing Affect Your Brain? Most of us write a little something everyday. It might be a grocery list, a poem, or a write-up on the infographic of the day. As we go through this daily ritual, however, we are probably not aware of the effects writing has on our brains. UCLE: Some significant numbers from literature and literary criticism. Setting: Using Scene To Enrich Your Writing. In both fiction and nonfiction, the setting is the general background against which your story takes place—the physical location and time period, both of which influence your characters and plot. So how can a creative writer use setting and scenery to further offset, augment, or reflect the action of the plot?

Although we’re going to be exploring this issue in terms of fiction, these techniques work for nonfiction as well. These craft techniques work in all genres: poetry, stories, personal essays, memoir, and books. Suppose you’re writing a novel that is set in the Deep South in 1955 and your protagonist is an immigrant facing prejudice and roadblocks at every turn. You’d have a completely different novel if your protagonist were a Texas cowboy who found himself in Mississippi at that particular time and place. Setting the stage for a short story or novel is a crucial part of engaging your reader. 1. 2. Writing Emotions VISUALLY by OokamiKasumi on deviantART. Fiction Writing Tips. Short Story Shortcuts: 4 Techniques For Making A Big Impact In Few Words. To successfully write short fiction, you need to make a big impact in as few words as possible.

The Six Things That Make Stories Go Viral Will Amaze, and Maybe Infuriate, You. When Jonah Berger was a graduate student at Stanford, in the early aughts, he would make a habit of reading page A2 of the Wall Street Journal, which included a list of the five most-read and the five most-shared articles of the day. Writing Fiction: Symbolism and All That. Maybe you never got anything out of your literature courses except a strong dislike for “analyzing a story to death.” Sometimes the symbolic interpretation of a story or poem can seem pretty far-fetched.