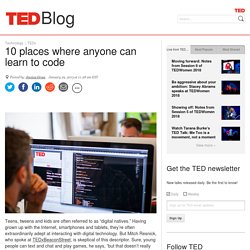 Having grown up with the Internet, smartphones and tablets, they’re often extraordinarily adept at interacting with digital technology. But Mitch Resnick, who spoke at TEDxBeaconStreet, is skeptical of this descriptor. Sure, young people can text and chat and play games, he says, “but that doesn’t really make you fluent.” Mitch Resnick: Let's teach kids to code Fluency, Resnick proposes in this TED Talk, comes not through interacting with new technologies, but through creating them. The former is like reading, while the latter is like writing. The point isn’t to create a generation of programmers, Resnick argues. In his talk, Resnick describes Scratch, the programming software that he and a research group at MIT Media Lab developed to allow people to easily create and share their own interactive games and animations. Educational Apps & Game Based Learning. Interactive. Flocabulary - Educational Hip-Hop.

You're seeing this message because something's preventing Flocabulary from loading correctly. 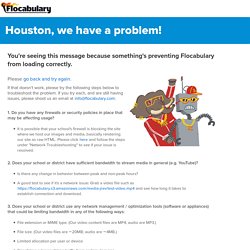 If that doesn't work, please try the following steps below to troubleshoot the problem. If you try each, and are still having issues, please shoot us an email at info@flocabulary.com. 1. Do you have any firewalls or security policies in place that may be affecting usage? It is possible that your school's firewall is blocking the site where we host our images and media, basically rendering our site as raw HTML. 2. Is there any change in behavior between peak and non-peak hours?

3. File extension or MIME type. Why App Smash? Inspired by the last #1to1iPadChat , I thought it was time to post on the world craze that is App Smashing. 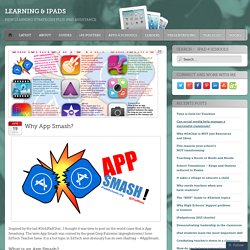 The term App Smash was coined by the great Greg Kulowiec (@gregkulowiec) from EdTech Teacher fame. It is a hot topic in EdTech and obviously has its own Hashtag – #AppSmash. What is an App Smash? Content created in one app transferred to and enhanced by a second app and sometimes third. Preferably the final product is then published to the web – remember, digital presence is the new résumé (CV). Reasons to App Smash: Teacher's Resources. For teachers. Paper. Online Charts Builder. Hohli Online Charts Builder New version: Try new version of Charts Builder, it based on new Google Charts API Load From Image URL: Chart Data can't equal to original, but very similar to it. 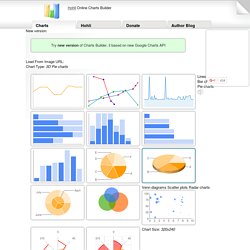 Only for images on chart.apis.google.com Chart Type: 3D Pie charts Lines Bar charts Pie charts For Pie Charts with labels choose 1000x300 or 800x375 size Venn diagrams Scatter plots Radar charts Chart Size: 320x240 Horizontal. Perspective. ChartsBin.com - Visualize your data. Create and share visual ideas online. Piktochart: Infographic and Presentation Tool for Non-Designers. Mimi Ito on Learning in Social Media Spaces (Big Thinkers Series) Mimi: So my question is this, why do we assume that kids' socializing and play is not a side of learning? 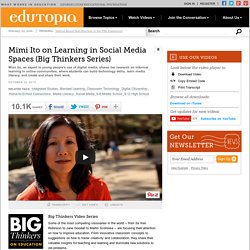 And on the flip side, why do we assume that schools can't have a spirit of entertainment and play as part of what they're doing? Mimi: Last year I wrapped up a three-year study with a large team of researchers where we were looking at a lot of different examples of kids' new-media practice, ranging from sort of everyday hanging-out behavior on sites like Myspace and Facebook with text messaging, IM to what we were calling more "geeked-out" kinds of participation, like making YouTube videos, remixing videos, creating podcasts, engaging in fan fiction, and other forms of fan production. 11 Tips For Students To Manage Their Digital Footprints - 11 Tips For Students To Manage Their Digital Footprints by Justin Boyle If you’ve scratched your head over suggestions to manage your “digital footprint,” you aren’t the only one. 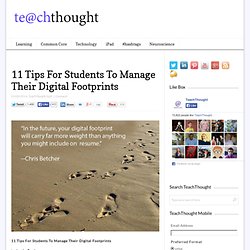 A surprisingly large percentage of people have never even heard the phrase, let alone thought about how to manage theirs responsibly. Among students, the percentage is probably higher. We’ll talk about ways you can help students understand and manage their digital footprints before they get themselves in trouble. The Definition Of A Digital Footprint Simply put, a digital footprint is the record or trail left by the things you do online. Luckily for us all, most of the major sources of personal information can be tweaked so we share only certain things with the general public. If you want to show students their digital footprint (or take a peek at your own) the personal info search engine Pipl.com is a great resource. What To Tell Your Students About Monitoring Their Digital Footprints: 11 Tips 1. 2. 3. 4. 5. 6. 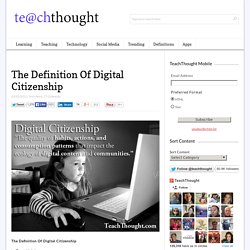 Which begs the question: what is digital citizenship? Well, first citizenship, which is formally defined as “the quality of an individual’s response to membership in a community.” This makes citizenship far more complex than a simple legal matter, but rather one that consists of self-knowledge, interaction, and intimate knowledge of a place, its people, and its cultural history.

So digital citizenship is nearly the same thing–“the quality of a response to membership in a digital community” would be a good first crack at the definition. Resources. Blog stuff.