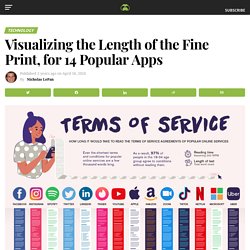 Over 60% of the world’s population owns a mobile phone and smartphone adoption continues to rise in developing countries around the world. While each brand has its own mix of components, whether it’s a Samsung or an iPhone, most smartphones can carry roughly 80% of the stable elements on the periodic table. But some of the vital metals to build these devices are considered at risk due to geological scarcity, geopolitical issues, and other factors.

What’s in Your Pocket? This infographic based on data from the University of Birmingham details all the critical metals that you carry in your pocket with your smartphone. 1. Screens are made up of multiple layers of glass and plastic, coated with a conductor material called indium which is highly conductive and transparent. Indium responds when contacted by another electrical conductor, like our fingers. 2. 3. 4. 5. 6. What’s Next? Good Habits Nursery Rhymes For Children. Welcome to Medium, where words matter. Agence Science-Presse. (1) Dumb Ways to Die - Official Karaoke Edition. Dr. P. Reiner featured in the Wall Street Journal “The World Isn’t as Bad as Your Wired Brain Tells You” Ever wonder why people’s perception of the incidence of crime, terrorism, kidnapping and other violent acts is often much higher than the reality? 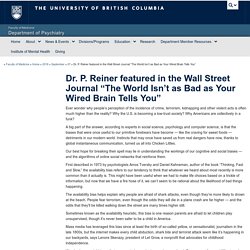 Why the U.S. is becoming a low-trust society? Why Americans are collectively in a funk? A big part of the answer, according to experts in social science, psychology and computer science, is that the biases that were once useful to our primitive forebears have become — like the craving for sweet foods — detriments in our modern world. Instincts that may once have saved us from real dangers have now, thanks to global instantaneous communication, turned us all into Chicken Littles. Our best hope for breaking their spell may lie in understanding the workings of our cognitive and social biases — and the algorithms of online social networks that reinforce them. The availability bias helps explain why people are afraid of shark attacks, even though they’re more likely to drown at the beach.

Online, this tendency goes into overdrive.

USA. Ef. Theconversation. Intellectual property may be the legal term for creations, including literary or artistic, but there is something inherently human about it as well. 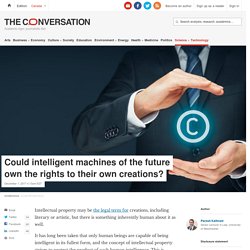 It has long been taken that only human beings are capable of being intelligent in its fullest form, and the concept of intellectual property strives to protect the product of such human intelligence. This is reflected in a number of intellectual property laws. The US Copyright Office, for instance, talks about the “fruits of intellectual labour” and registers original works of authorship “provided that the work was created by a human being”. But what if a piece of art, music, literature, photography or other product were not created by a human mind at all, but by a machine embedded with artificial intelligence (AI)? A judge in California last year accepted a contention that a macaque monkey from Sulawesi, Indonesia, did not have the standing to claim copyright of a “selfie” it had taken. Intelligence and intellectual property. Veritasium.

Theconversation. Ask people about memorable things or events that happened during their lives and their recollections tend to be from between the ages of 15 and 25. 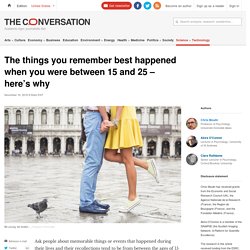 It doesn’t matter if it’s current affairs, sporting or public events. It can be Oscar winners, hit records, books or personal memories. We researchers in the science of memory call this the reminiscence bump – in reference to the shape it gives when we plot a curve of memories over a person’s lifespan. It is one of those rare effects in cognitive psychology that is not contested. We have given up researching whether it exists and begun asking why. Some researchers propose we are better at recalling first-time experiences like a first kiss, first driving lesson and so on – most of which tend to happen at that age.