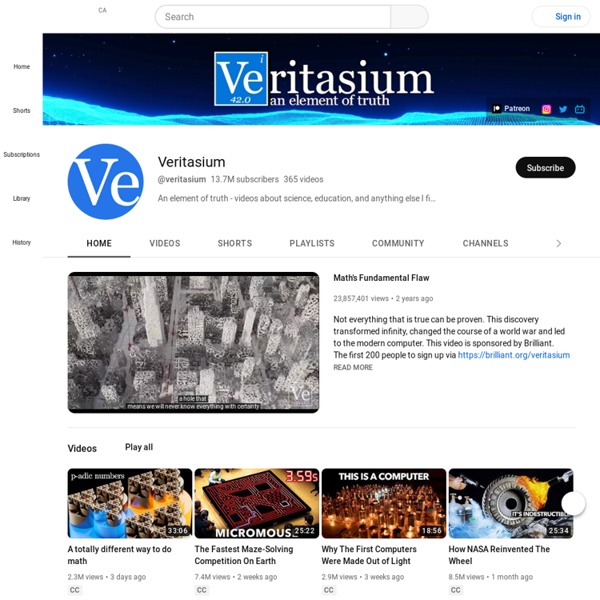 What's Inside? The past 12 months our channel has gone from 200 subscribers to 1.2 million. We had days where we were the top growing channel in all of YouTube. Amazing considering this channel all started as a second grade science project. PBS Space Time Have you ever asked “what is beyond the edge of the universe?” And have you ever been told that an infinite universe that has no edge? You were told wrong. In a sense. We can define a boundary to an infinite universe, at least mathematically. And it turns out that boundary may be as real or even more real than the universe it contains.

theconversation Ask people about memorable things or events that happened during their lives and their recollections tend to be from between the ages of 15 and 25. It doesn’t matter if it’s current affairs, sporting or public events. It can be Oscar winners, hit records, books or personal memories. We researchers in the science of memory call this the reminiscence bump – in reference to the shape it gives when we plot a curve of memories over a person’s lifespan. It is one of those rare effects in cognitive psychology that is not contested. MagicBox Animation Upload Magicbox.co.in MagicBox Animation Ramp: Forces and Motion - Force Topics Force Position Velocity Acceleration Description Explore forces and motion as you push household objects up and down a ramp. Lower and raise the ramp to see how the angle of inclination affects the parallel forces.

theconversation Intellectual property may be the legal term for creations, including literary or artistic, but there is something inherently human about it as well. It has long been taken that only human beings are capable of being intelligent in its fullest form, and the concept of intellectual property strives to protect the product of such human intelligence. This is reflected in a number of intellectual property laws. The US Copyright Office, for instance, talks about the “fruits of intellectual labour” and registers original works of authorship “provided that the work was created by a human being”. Mango Juniors Watch Three Little Pigs, Animated Cartoon Series For Kids, Part 6, only on channel Mango Juniors.Three Little Pigs, Animated Cartoon Series For Kids, Part 1, Mango Juniors. This is story of, Three little pigs. The first ne and the oldest and wisest pig Fina, is not afraid of working hard and you can always depend on him. Second little pig loves to eat pizza, cake and candies. He spends his day dreaming and relaxing. Third Pig thinks he is king of rock and roll, he loves singing and dancing.

Friction - Thermodynamics Topics Friction Thermodynamics Heat Description Dr. P. Reiner featured in the Wall Street Journal “The World Isn’t as Bad as Your Wired Brain Tells You” Ever wonder why people’s perception of the incidence of crime, terrorism, kidnapping and other violent acts is often much higher than the reality? Why the U.S. is becoming a low-trust society? Why Americans are collectively in a funk? A big part of the answer, according to experts in social science, psychology and computer science, is that the biases that were once useful to our primitive forebears have become — like the craving for sweet foods — detriments in our modern world. Power Kids Getting lost in outer space was never this fun! Prince and Fox are on an adventure, chasing Snake, all over the Universe. And you're invited. Featuring Prince, the thoughtful humanoid alien prince from Asteroid B 6 12, and his faithful but skeptical sidekick, Fox, a talking fox. They travel the Milky Way and beyond on their starlight powered airplane, to visit a lot of awesome planets, and meet new people everytime. Snake kinda tries to mess things up, but Prince has starlight power with him.

Gravity And Orbits - Gravitational Force Topics Gravitational Force Circular Motion Astronomy Description Move the sun, earth, moon and space station to see how it affects their gravitational forces and orbital paths. Visualize the sizes and distances between different heavenly bodies, and turn off gravity to see what would happen without it! Sample Learning Goals

Visualizing the Length of the Fine Print, for 14 Popular Apps In an increasingly connected world, smartphones have become an inseparable part of our lives. Over 60% of the world’s population owns a mobile phone and smartphone adoption continues to rise in developing countries around the world. While each brand has its own mix of components, whether it’s a Samsung or an iPhone, most smartphones can carry roughly 80% of the stable elements on the periodic table. But some of the vital metals to build these devices are considered at risk due to geological scarcity, geopolitical issues, and other factors. What’s in Your Pocket?

Nursery Rhyme ABC Wheels On The Bus Go Round and Round By SpiderMan Cartoon Rhyme For Children/Kids most popular English cartoon rhymes for your kids, children, toddlers, tweens and lullabies in HD. Watch Wheels On The Bus sing the popular nursery rhyme song. Dont miss the popular kindergarten children rhymes and also make sure to like and subscribe to watch more nursery rhymes and Finger family rhyme/daddy finger song. Watch all popular superheros like Spiderman, Superman, Hulk, Ice Man, Batman, Ironman, Shakthimaan and many others sing finger family songs and popular rhymes for you.