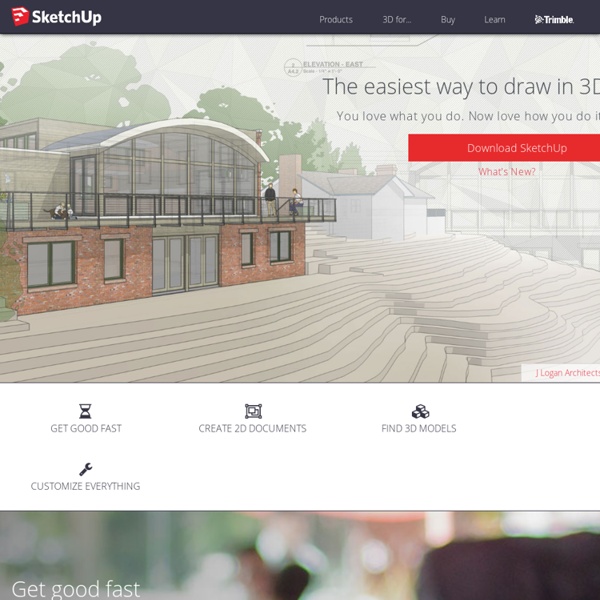 26 Best 3D Design/3D Modeling Software Tools (12 are Free) What is this 3D design software? A new take on the process of modeling was introduced by tools like ZBrush, which incorporates concepts known from clay sculpting into the realm of 3D modeling software. The developers at Pixologic have made their name with a series of handy techniques that simplify the modeling workflow. For instance, ZBrush is capable of creating a new model with a higher, uniform polygon distribution to counter the effects of polygon stretching. The main concept to grasp is often called »progressive detailing«. Tumblr Actually The question I get the most is how I write characters that feel like real people. Generally when I’m designing a human being, I deconstruct them into 7 major categories: 1.

Woody Materials Library I was disappointed with the lack of cool wood-grained materials for sketchup, so I threw this set together, maybe its useful. Of course it could use some work… To use this. 1. Extract the library (.zip) onto your computer somewhere. 2. Open Sketchup (I use 6)3. Tools and Resources for Remarkable Explanations Sometimes, words are not enough. To grab an audience’s attention and make an explanation remarkable, explainers need ways to stand-out, to be interesting. Thankfully there are a growing number of resources that can help explainers turn their ideas into experiences that captivate audiences. I've listed a few below. (Note: I am not affiliated with the services below and receive no compensation from them).

The Shapes of CSS Learn Development at Frontend Masters CSS is capable of making all sorts of shapes. Squares and rectangles are easy, as they are the natural shapes of the web. 30 Best Tools for Data Visualization During the past few years the client demand regarding Data Info-graphics has increased in volume and demand as well as in : clarity. The range of technologies available by which to collect and examine data is constantly on the rise- both in web and desktop applications, which provide several great interfaces. From a technological aspect , such tools ( or technologies ) have created efficiency based models which have gone onto disrupting existing paradigms of the past.

Tumblr “He who controls the Spice, controls the universe!” And whoever learns to make this awesome Spice-Filled Sandworm Bread will be among the geekiest bakers on Earth and Arrakis alike. The giant sandworms, or Shai-Hulud, of Frank Herbert’s Dune universe are enormous cylindrical creatures, some more than 400 meters long, with huge mouths full of sharp, crystalline teeth. This bread version, created by Chris-Rachael Oseland of Kitchen Overlord, is much, much smaller and has teeth made of almonds. However, based on how Paul Atreides described the breath of the first sandworm he ever encountered, they’re both full of cinnamon.

BuildEdge 30-DAY Moneyback GUARANTEE All we ever wanted was a way to model a building without huge complicated CAD software. So we created BuildEdge PLAN. With BuildEdge PLAN, you can be drawing parametrically connected models of buildings in a mater of minutes! Purchase BuildEdge PLAN and experience the best solution for generating structures in SketchUp. 30+ Really Useful Infographics Tools & Resources Infographic credit: Ivan Cash Infographics are everywhere! Whether you’re a fan of them or not , infographics have become a staple of web content and are engaged in a seemingly endless love affair with social media. As digital marketers, we’re interested in the content marketing potential of infographics, which can generate thousands of pageviews, social media shares, backlinks and capture mindshare.