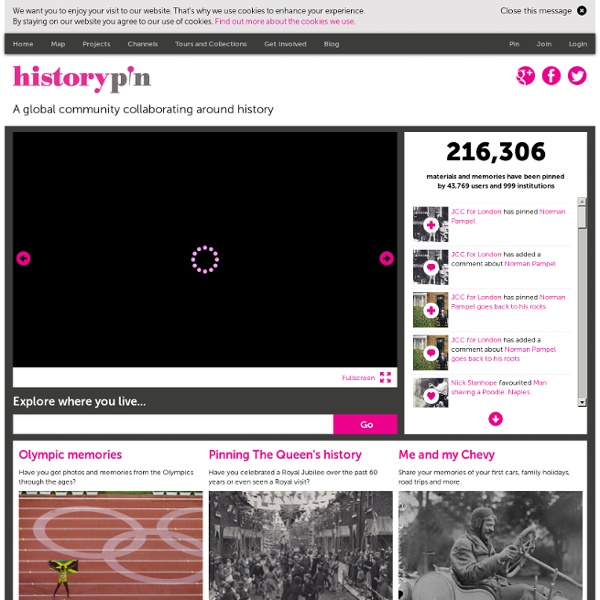 materials, memories and contributions to mysteries have been added by 54,642 users and 1,666 institutions Explore where you live... Go Year of the Bay What events, big and small, have shaped the San Francisco Bay? Share your memories.

Immigration: Stories of Yesterday and Today and Ellis Island World War II and the Postwar Period The United States entered World War II in 1942. During the war, immigration decreased. Make Beliefs Comix For Educators How to Play with MakeBeliefsComix.com How to Play: For Educators Click here to watch a video of students at City College, New York, talking about how MakeBeliefsComix.com helps them learn English. Their instructor, Tamara Kirson, was named The New York Times 2009 ESOL Teacher of the Year. To see her lesson plan click here. iPhone Repair Background and Identification ¶ Released on June 29, 2007 the first iPhone spun the cell phone world around and took it in a completely new direction. It took the idea of having a phone at your fingertips at all times and turned it into having your personal computer/phone/assistant at your fingertips at all times, leading us into the era of smartphone-dominated consumers.

Writing about History Fair-Use Policy Primary Sources and Secondary Sources What is a Primary Source? A primary source is a document that was created at the time of the event or subject you've chosen to study or by people who were observers of or participants in that event or topic. If, for example, your topic is the experience of workers in the Chicago packinghouses during the first decades of the twentieth century, your primary sources might be: Do the Two Step to Protect Your Google Drive, Dropbox, and Box Files Cloud storage of files is one of my favorite aspects of the modern Internet. Cloud storage services make it easy to access all of my important files from any computer and most mobile devices. And for students cloud storage eliminates the I forgot my flashdrive excuse for not having an assignment ready for class.

VocalNationalAnthems Jana Gana Mana (Bengali: জন গণ মন, Jôno Gôno Mono) is the national anthem of India. Written in highly Sanskritized Bengali, it is the first of five stanzas of a Brahmo hymn composed and scored by Nobel laureate Rabindranath Tagore. It was first sung at the Calcutta Session of the Indian National Congress on 27 December 1911. Plant a Question, Grow Answers Topic (required) Type the topic of your new AnswerGarden. This can be a question or a topic, such as: "What do you think of my website?" More options (optional) For your convenience, you can change the following settings for your new AnswerGarden. Phone Repair Background and Identification ¶ As technology advances, devices utilizing these technologies become smaller and smaller. Today's cell phones have more computing power than past computers that took up an entire room of space. Modern mobile devices allow users to hold the world -- or at least all of its information, maps, and games -- in their hands. Identifying your particular mobile device can be a task in itself.

11 LEGO Recreations Of The World’s Most Famous Photos The recreation of events have been achieved in many media formats from photographs to movies but in this post, Designussion showcases something a little different. The following images are recreations of some of the worlds most famous photos in LEGO. Enjoy. Tiananmen Square protests of 1989 This famous photo, taken on 5 June 1989 by photographer Jeff Widener, depicts an unknown man halting the PLA’s advancing tanks near Tiananmen Square.

7 Web 2.0 Tools for Students SmoothDraw SmoothDraw is an easy natural painting and digital free-hand drawing software that can produce high quality pictures. It supports many kinds of brushes (pen, pencil, dry media, airbrush, image, etc.), retouch, tools, layers, image adjustment, and many effects. This software works great with tablets and PC. All About Explorers Henry Hudson According to detailed records recently discovered in the archives of the Cork County Records Office in Ireland, Henry Hudson was born in room 441 of the Blarney Medical Center at 3:17 PM on Monday, August 13, 1593. He was a very well-educated man who attended the famous Harvard University. Hudson’s main goal as an explorer was to find a northern passage to the Orient. His first of four voyages was on a small, three-masted ship named Hopewell.

Writeboard Hello, We launched Writeboard back in October of 2005 as a stand-alone service. A few years later we integrated Writeboards into Basecamp Classic and Backpack. Today, the vast majority of Writeboards are created inside those two products. As part of refocusing on Basecamp, we’ve decided to retire Writeboard.com.

Free online video editing software Simple With WeVideo you can go beyond template restrictions.It's a snap to add text, transitions, effects and audio. ... Yet Powerful Should you need more, you can easily do advanced editing like adding text annotation, panning and zooming (Ken Burns effect), Picture In Picture and even Green Screen.