Goodpbl. How the Maker Movement Is Moving Into Classrooms. In 1972, Seymour Papert predicted what many complain is the state of today's apps and programs for modern students: [T]he same old teaching becomes incredibly more expensive and biased toward its dumbest parts, namely the kind of rote learning in which measurable results can be obtained by treating the children like pigeons in a Skinner box. Indeed, many of us go on first our first techno-rush as kids playing with erector sets, Legos, and the Radio Shack electronic kits. In a day when everyone thinks, "There's an app for that," many educators believe that we're missing the point of technology if we think its best use is programming kids to memorize math facts.

Students don't want to use apps -- they want to make them. Why the 'Maker Movement' is Popular in Schools. The maker movement is a global, DIY movement of people who take charge of their lives, solve their own problems and share how they solved them. 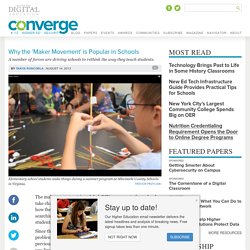 And it's growing in schools that are searching for more authentic learning experiences for their students. Since the beginning of time, people have made things to solve problems and otherwise improve their quality of life. Dissecting the Un-Makerspace: Recycled Learning. It starts with a twist, a squeak, and a cheer. 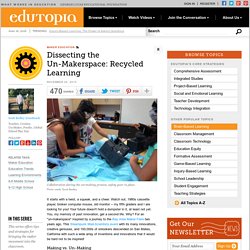 Watch out, 1980s cassette player, broken computer mouse, old monitor -- my fifth graders and I are looking for you! Your future doesn't hold a dumpster in it, at least not yet. You, my memory of past innovation, get a second life. Manufacturing Makerspaces. Kids gather to make Lego robots; teens create digital music, movies, and games with computers and mixers; and students engineer new projects while adults create prototypes for small business products with laser cutters and 3D printers. 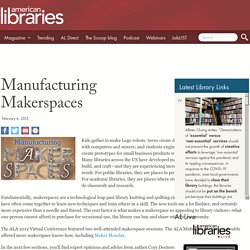 Many libraries across the US have developed makerspaces—places to create, build, and craft—and they are experiencing increased visits and demand as a result. For public libraries, they are places to promote community engagement. For academic libraries, they are places where students and faculty feel welcome to do classwork and research. Fundamentally, makerspaces are a technological leap past library knitting and quilting circles, where patrons and experts have often come together to learn new techniques and train others in a skill.

The new tools are a lot flashier, and certainly more expensive than a needle and thread. Maker Education - About Maker Education. Maker Ed – Maker Education Initiative. Untitled. Untitled. The Cognitive Apprenticeship Model in Educational Practice. Cognitive Apprenticeship. The Learning Network. Toys from Trash. Imagination.org – Global Cardboard Challenge. TheDadLab - kids science experiments - TheDadLab. Knit 52 Kinds of Mushrooms in Glowing Colors. Knitting and mushrooms isn't a combination that springs to mind instantly, but once you start to look at these creations you too will be hooked. 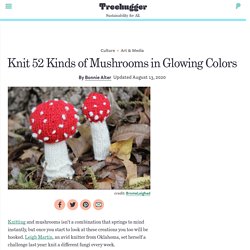 Leigh Martin, an avid knitter from Oklahoma, set herself a challenge last year: knit a different fungi every week. It's a journey; not all of the mushrooms were found in situ, many she copied from images in books. But she has taken the time to examine the history, wool and colors used and her personal story of each one. For example: What Is Letterboxing? Treasure hunting has always held an almost mystic allure, whether you're Lara Croft or Captain Jack Sparrow or, you know, somebody real. 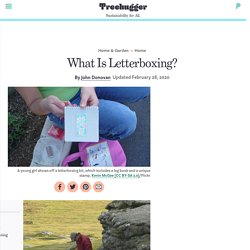 Like Samurai Kitty. The treasure part of treasure hunting is only part of it, of course, and maybe the smaller bit at that. In treasure hunting, as it is with travel and maybe with serial dating, the search is often more rewarding than the payoff. It's also true with letterboxing, a kind of souped-up scavenger hunt. Geocaching. Applications. Devices. Eklektika. Gaming. Markdown.md. Notes Applications. Personalized Learning. Photo Graphy. Productive Mode. Programming Programmers. Video Media. Writing Abilities. Community Owned Infrastructure. Big Energy.