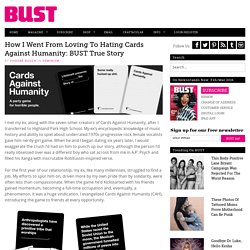 My ex’s encyclopedic knowledge of music history and ability to spiel about underrated 1970s progressive rock female vocalists gave him nerdy-girl game. When he and I began dating six years later, I would exaggerate the crush I’d had on him to punch up our story, although the person I’d really obsessed over was a different boy who sat across from me in A.P. A defence of teenage diaries. Last updated Sun Apr 12 17:00:00 UTC 2015 @rookiemag Instagram "The urge to capture the minutiae of your existence on paper is a powerful rejection of a culture that deems your life insignificant," writes Neha Kale. 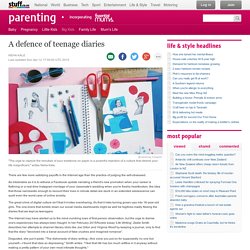 Laverne Cox and bell hooks Had a Discussion About Gender and Pop Culture. Bell hooks is a scholar-in-residence at the New School in New York City this month and this week talked with none other than Laverne Cox in front of a packed crowd. 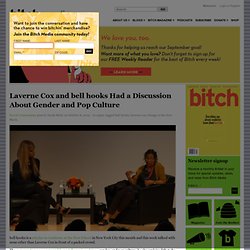 The conversation was a rare and honest discussion of race, gender, and pop culture. hooks explained that she was interested in talking to Cox because she wanted to see how her feminist theory is affecting people outside of academia. "People read bell hooks and write their papers and have their discussions. When I heard through the grapevine that Laverne Cox was a big bell hooks reader, I thought, I this is somebody I need to talk with," said hooks. Working as a black trans woman in Hollywood is inherently complicated, added hooks: "She has an awareness of the need to decolonize, but still working within a very colonizing system.

" For her part, Cox explained that hooks' book Teaching to Trangress changed her life:

Why Does Our Society Undervalue Domestic Work? As a child, Sheila Bapat watched her mom do all the housework. 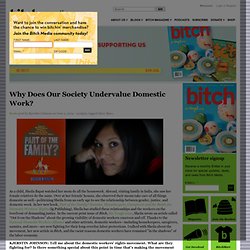 Abroad, visiting family in India, she saw her female relatives do the same. Over at her friends' houses, she observed their moms take care of all things domestic as well—politicizing Sheila from an early age to see the relationship between gender, justice, and domestic work. In her new book, Part of the Family? Is Your Yoga Studio Feminism-Free? Come to a comfortable seated position; use the blanket to elevate your hips so you can sit with the spine straight. 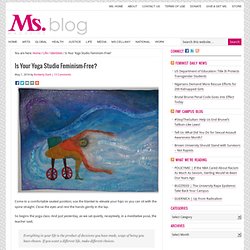 Close the eyes and rest the hands gently in the lap. So begins the yoga class.

Lejournal.cnrs. Religion. The Empowerment Elite Claims Feminism. As the movement enjoys a star moment, “controversial” issues risk being left behind. 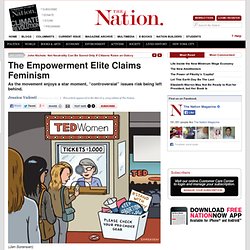 At first, I wasn’t sure why TEDWOMEN—the feminist-minded spin-off of TED Talks that launched in 2010—troubled me. The San Francisco conference held this past December featured incredible speakers and performers. Meet the Woman Giving Cards Against Humanity a Makeover. Screenwriter and political consultant Kate Stayman-London started the Tumblr Ladies Against Humanity as a feminist answer to the party game Cards Against Humanity (which positions itself as a "despicable and awkward" version of Apples to Apples). 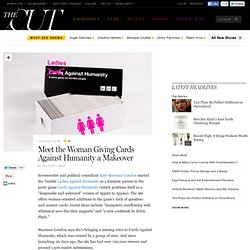 The site offers woman-oriented additions to the game's deck of question-and-answer cards; recent ideas include "dumpsters overflowing with whimsical save-the-date magnets" and "a new cookbook by Sylvia Plath. " Stayman-London says she's bringing a missing voice to Cards Against Humanity, which was created by a group of men. And since launching six days ago, the site has had over 700,000 viewers and around 1,500 reader submissions. Guerrilla Girls: Naked Through the Ages. Do Women STILL Have to be Naked to Get Into the Met. 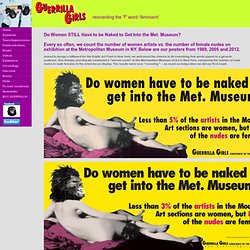 Museum? Every so often, we count the number of women artists vs. the number of female nudes on exhibition at the Metropolitan Museum in NY. Below are our posters from 1989, 2005 and 2012.

Engagement rings are barbaric. This piece originally appeared on The Tyee. 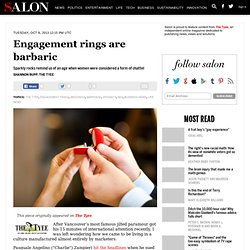 After Vancouver’s most famous jilted paramour got his 15 minutes of international attention recently, I was left wondering how we came to be living in a culture manufactured almost entirely by marketers. Pasquale Angelino (“Charlie”) Zampieri hit the headlines when he sued his former fiancée for the return of the $16,500 sapphire and diamond ring he gave her, after three weeks acquaintance, in anticipation of their soon-to-be wedded bliss. They’d met on one of those online dating sites, the news stories recounted with glee, and by his account it was kismet.

Chelsea Manning, media bias and cissexism. Chelsea Manning has been on my mind a lot lately, but not for reasons most cisgender folks are learning about today.

Gender and Bathroom Graffiti. Quick Hit: Melissa Harris-Perry talks cultural appropriation and the “Harlem Shake” 10 affiches pour l’égalité hommes/femmes. TowardTheStars. I Ain’t Your Girl: Controlling Identities and Acts of Isolation in the Academy. Recherche universitaire. The Kissing Sailor Photograph: An Iconic Image of War, Not Romance. The photograph of a sailor kissing a woman on V-J Day in Times Square is an iconic one. Taken by photographer Alfred Eisenstaedt in Times Square on August 14, 1945, it is probably one of the most memorable images of WWII. As the Japanese surrender, the image seems to capture the jubilation at the end of a long war: The image has become ubiquitous; you can buy it on posters and Valentine’s Day cards.