New Bloom's Taxonomy Poster for Teachers. August 29, 2014 Bloom's taxonomy is one of the most popular learning taxonomies ever. 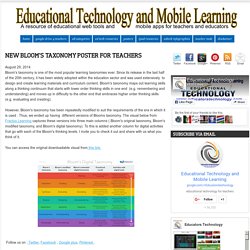 Since its release in the last half of the 20th century, it has been widely adopted within the education sector and was used extensively to design and create learning materials and curriculum content. Bloom's taxonomy maps out learning skills along a thinking continuum that starts with lower order thinking skills in one end (e.g. remembering and understanding) and moves up in difficulty to the other end that embraces higher order thinking skills (e.g. evaluating and creating). However, Bloom's taxonomy has been repeatedly modified to suit the requirements of the era in which it is used . Thus, we ended up having different versions of Blooms taxonomy. The visual below from Fractus Learning captures these versions into three main columns ( Bloom's original taxonomy, Bloom's modified taxonomy, and Bloom's digital taxonomy).

You can access the original downloadable visual from this link. Howard Rheingold - Social Media and Peer Learning: From Mediated Pedagogy to Peeragogy. 2014 Higher Education Edition. Transliteracy Research Group Archive 2006-2013. Transliteracy was always intended to be an open source idea and as the years have passed it has continued to evolve. 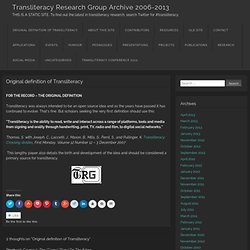 That’s fine. But scholars seeking the very first definition should use this: “Transliteracy is the ability to read, write and interact across a range of platforms, tools and media from signing and orality through handwriting, print, TV, radio and film, to digital social networks.” Thomas, S. with Joseph, C., Laccetti, J., Mason, B., Mills, S., Perril, S., and Pullinger, K. Transliteracy: Crossing divides, First Monday, Volume 12 Number 12 – 3 December 2007 This lengthy paper also details the birth and development of the idea and should be considered a primary source for transliteracy.

Transliteracy Librarian. Defining transliteracy is important for those professionals who are driven to develop actions based on a prescript definition. 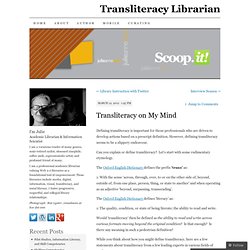 However, defining transliteracy seems to be a slippery endeavour. Can you explain or define transliteracy? Let’s start with some rudimentary etymology. The Oxford English Dictionary defines the prefix ‘trans’ as: 6 Tips on How to Choose Reference Management Software. 60 Educational Apps in 60 Minutes by Clint Stephens on Prezi. Computerized Contact Lenses Could Enable In-Eye Augmented Reality. Over past 125 years, contact lenses have come a long way. 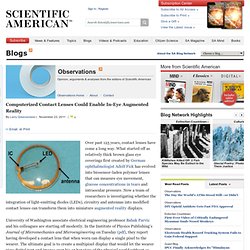 What started off as relatively thick brown glass eye coverings first created by German ophthalmologist Adolf Fick has evolved into biosensor-laden polymer lenses that can measure eye movement, glucose concentrations in tears and intraocular pressure. Now a team of researchers is investigating whether the integration of light-emitting diodes (LEDs), circuitry and antennas into modified contact lenses can transform them into miniature augmented reality displays. University of Washington associate electrical engineering professor Babak Parviz and his colleagues are starting off modestly. In the Institute of Physics Publishing’s Journal of Micromechanics and Microengineering on Tuesday (pdf), they report having developed a contact lens that when worn can display a single pixel to the wearer.

Building such lenses is a challenge for several reasons. Image courtesy of the University of Washington in Seattle.

The 21st century skills teachers should have. Technology advancements have touched every facet of life including education. 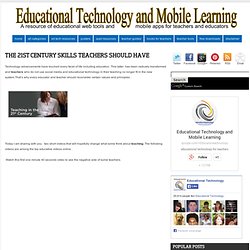 This latter has been radically transformed and teachers who do not use social media and educational technology in their teaching no longer fit in the new system.That’s why every educator and teacher should reconsider certain values and principles . Today I am sharing with you two short videos that will hopefully change what some think about teaching. The following videos are among the top educative videos online . Watch this first one minute 40 seconds video to see the negative side of some teachers. Negative version of when i become a teacher So if you want to fit in the system and develop professionally then this is how to do it . watch this short video to learn more. positive version of when i become a teacher The 21st century teachers are characterized by certain holistic and student centered features , some of them are summarized below .

The risk taker : The Collaborator : The model :

OER. Curation. IPad apps for learning. Tools of the trade. Getting FLUENT with the 5 FLUENCIES… A couple of weeks ago we started a “series” based on the work of those lovely chaps at the 21st Century Fluency Project – Lee Crockett, Ian Jukes and Andrew Churches very kindly gave me permission to use their new book Literacy is NOT Enough to create a number of “guest-posts” (now, if we could only get more writers to don their “creative commons” hats)! 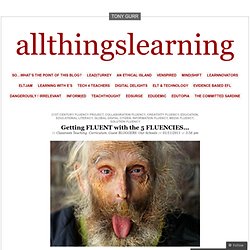 To date, I have done three posts: …and I promised that the forth would outline the “spirit” of the 5 Fluencies. Unable to edit down 6 chapters on my own, I got a “help me” message to Ian this morning… In less than an hour he had done this – Ian, you are “the man”! At the very heart of the 21st Century Fluency Project are the Five Fluencies. Online Learning is More Than Learning, Online. By Kelly Meeker, Open Sesame Blog New form learning begets a new kind of learning: Where the learner is empowered to find information as she needs it, and where information is organized, shared and accessible to everyone. 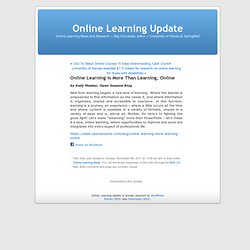 In this function, learning is a journey, an experience – where a little occurs all the time and where content is available in a variety of formats, shared in a variety of ways and is, above all, flexible. Digital Literacy: Skills for the 21st Century: Resources. An anthropological introduction to YouTube.