Stay sharp over the summer: Master control. Boost flexibility, agility and ball control with this drill from the Nike Academy The first training session back after a long, relaxing summer can be a demoralising affair. 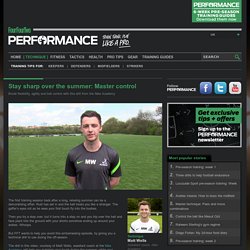 Rust has set in and the ball treats you like a stranger. The gaffer’s eyes roll as he sees your first touch fly into the bushes. Then you try a step over, but it turns into a step on and you trip over the ball and face plant into the ground with your shorts somehow ending up around your ankles. Whoops. But FFT wants to help you avoid this embarrassing episode, by giving you a technical drill to use during the off-season. The drill in this video, courtesy of Matt Wells, assistant coach at the Nike Academy, will help you maintain your touch during the summer, while your team-mates are idle. Play like Spain: Fast combinations: Part one. Technical football drills. Coerver Coaching: Speed with the ball drill. Switch from attack to defence in a flash, with this drill from Coerver Coaching Raw pace and speed with the ball are two different things. 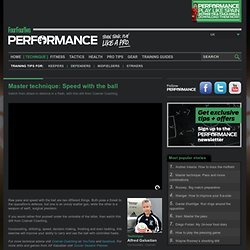 Both pose a threat to the opposition's defence, but one is an unruly scatter gun, while the other is a weapon of swift, surgical precision. If you would rather find yourself under the umbrella of the latter, then watch this drill from Coerver Coaching. Incorporating, dribbling, speed, decision making, finishing and even tackling, this exercise will improve your ability to carry and use the ball with controlled haste. Pass with Xavi's precision: Drill two. Want to boss the game like Barcelona’s diminutive midfield maestro? 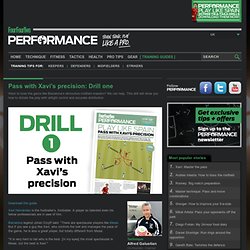 We can help. This drill will show you how to dictate the play with airtight control and accurate distribution Download this guide Xavi Hernández is the footballer’s, footballer. A player so talented even his fellow professionals are in awe of him. Barcelona legend Johan Cruyff said: "There are spectacular players like Messi. "It is very hard to tell who is the best. Coerver Coaching ball drill: Running and passing at speed. Ashley Young's shooting drill. Improve the accuracy of your finishing with this drill from the Manchester United and England wide boy “I always look forward to shooting drills. 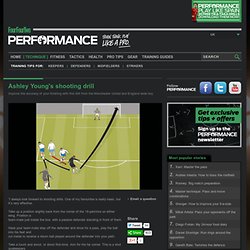 One of my favourites is really basic, but it’s very effective. Take up a position slightly back from the corner of the 18-yard-box on either wing. Position a team-mate just inside the box, with a passive defender standing in front of them. Master technique: Pass and move combinations. Tony Carr: Making the killer pass. Unlock any defence with this passing drill from West Ham United's academy director, Tony Carr In a tight game when space is at a premium every team needs a player who can play the pass that nobody else can see. 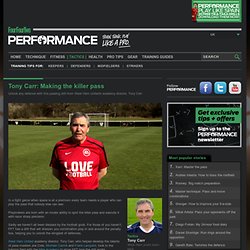 Playmakers are born with an innate ability to spot the killer pass and execute it with razor sharp precision. Sadly we haven’t all been blessed by the football gods. For those of you haven’t, FFT has a drill that will sharpen you combination play in and around the penalty box, helping you to unlock the stingiest of defences. West Ham United academy director, Tony Carr, who helped develop the talents of pass masters Joe Cole, Michael Carrick and Frank Lampard, took to the training field with the Nike Academy to show FFT how the drill works. Tony Carr: Hitting a team on the counter-attack. Speed is they key to a blistering breakaway, according to West Ham United's academy director, Tony Carr Jose Mourinho has built Real Madrid's success around a devastating counter-attack, armed with speed and precision. 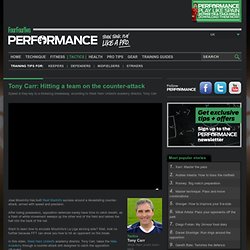 After losing possession, opposition defences barely have time to catch breath, as a flash of white movement sweeps up the other end of the field and lashes the ball into the back of the net. Want to learn how to emulate Mourinho's La Liga winning side? Well, look no further because FFT can show you how to hit an opponent on the break. In this video, West Ham United's academy director, Tony Carr, takes the Nike Academy through a counter-attack drill designed to catch the opposition off-guard. 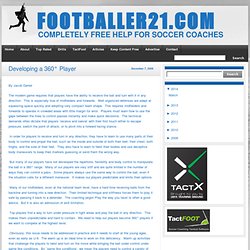 This is especially true of midfielders and forwards. Well organized defenses are adept at squeezing space quickly and adopting very compact team shape. This requires midfielders and forwards to operate in crowded areas with little margin for error. Players must learn how to use the gaps between the lines to control passes instantly and make quick decisions. In order for players to receive and turn in any direction, they have to learn to use many parts of their body to control and propel the ball, such as the inside and outside of both their feet, their chest, both thighs, and the sole of their feet. But many of our players have not developed the repertoire, flexibility and body control to manipulate the ball in a 360° range.

Top players find a way to turn under pressure in tight areas and play the ball in any direction. 1. 2. 3. 4. 5. 6. 7. 8. 9. 10. Blog Archive » Transition and Speed of Play. By Bruce DeatonI have used this for a lot of basic attacking principles – a number of different ways (transition play, changing point of attack, second and third man runs, speed of play – all with emphasis on attitude to attack and capitalizing on opportunities). 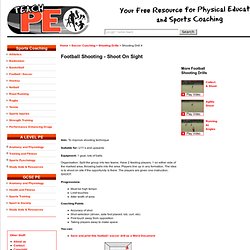 Organisation: Split the group into two teams. Have 2 feeding players, 1 on either side of the marked area, throwing balls into the area. Players line up in any formation. The idea is to shoot on site if the opportunity is there. The players are given one instruction, SHOOT. Progressions: Must be high tempo Limit touches Alter width of area Coaching Points Accuracy of shot Shot selection (driven, side foot placed, lob, curl, etc) First touch away from opposition Taking players away to make space. Soccer Drills - Heading Drill 4 - run and head. Soccer Drills - Goalkeeping.