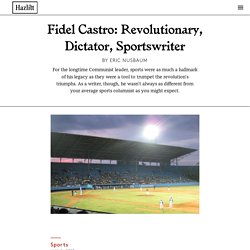 His name is Rey Ordoñez, and it was his first trip home in two decades. I learned of the Ordoñez visit from a tour guide who showed me grainy cell phone pictures of the former New York Mets shortstop handing out gloves to a crowd of kids. His return to the island, made possible by a new Cuban immigration law, was a very big deal. In Cuba, baseball bears more resemblance to a national religion than a national pastime; when a player defects, people notice. Juan Tunas, Cuba's original netbuster. The 11 players who lined up for Cuba against Romania in Toulouse on 9 June 1938 had never been outside their country before, let alone competed in a major international competition. 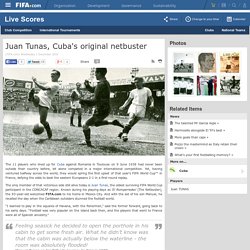 USA vs. Cuba: Score, Grades and Post-Match Reaction for Gold Cup Match. A dubious beginning to Saturday's CONCACAF Gold Cup match for the United States men's national team turned out to be minimally concerning, as the Americans proceeded to win comfortably over Cuba 4-1 in Sandy, Utah's Rio Tinto Stadium. 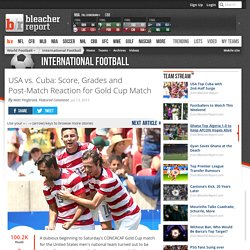 This marked a historic occasion for the victors, with the U.S. team's record-tying seventh straight win, per Fox Soccer's official Twitter: It wasn't without adversity, though, especially in the early going. USA 4-1 Cuba - as it happened. USA advances to Gold Cup quarterfinals, defeats Cuba 4-1 - Gold Cup News. Updated May 21, 2014 7:00 PM ET Of all the difficult games that stared the United States men's national team in the face heading into the summer, this one against Cuba was doubtless not the one in which head coach Jurgen Klinsmann expected to do the most coaching. 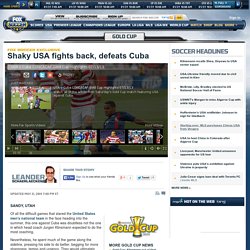 Nevertheless, he spent much of the game along the sideline, pressing his side to do better, begging for more sharpness, tempo and urgency. They would ultimately prevail 4-1, take their record-tying seventh straight win and book their place in the CONCACAF Gold Cup quarterfinals, but a shocking Cuban lead put all that in doubt. In a plodding first half, wherein the Cubans left all of the actual soccer-playing up to the Americans as they huddled in their own half, the tempo soon dropped to unsustainably low levels for the USA.

With far too few of Yanks committed to sharp ball distribution and making runs, their only hope was to resort to long balls and crosses. Cuba reforms: Who are the biggest winners? 17 December 2014Last updated at 16:58 ET By Kim Gittleson BBC business reporter, New York The Cuban embargo is the US's oldest trade sanction, dating to 1961 The 53-year-old Cuban embargo is the US's longest-running trade sanction. 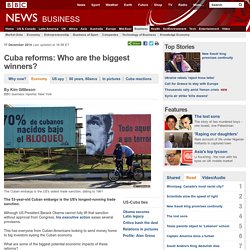 Although US President Barack Obama cannot fully lift that sanction without approval from Congress, his executive action eases several provisions. This has everyone from Cuban-Americans looking to send money home to big investors eyeing the Cuban economy. Landmark US-Cuba talks end in 'positive' atmosphere. 22 January 2015Last updated at 16:33 ET The talks in Havana focused on restoring diplomatic ties Two days of historic talks between the United States and Cuba have ended with both sides agreeing to meet again. 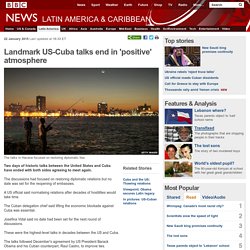 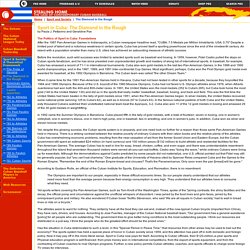 Pettavino and Geraldine Pye The Politics of Sport in Cuba: Foundations After the 1987 Pan-American Games in Indianapolis, a Cuban newspaper headline read, "CUBA: 7.5 Medals per Million Inhabitants. Ernesto 'Che' Guevara quotes. Football Diary: Only one Che Guevara. Escape From Cuba: Risking All For Football. Here The Home of Caribbean Football puts the spotlight on Cuba’s political state and the impact it has on their football, with defection popular in a country governed under a strong communist system… The writing “Viva Fidel” translates as “Long Live [Castro] Fidel”, supporting the former President of Cuba who spearheaded the Cuban Revolution. 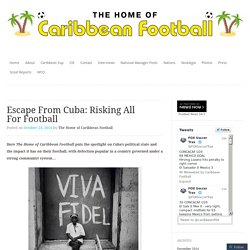 (courtesy of cuba-junky.com) Cuba – the largest island in the Caribbean with a population of over 11 million people – is one of the few communist countries left in the world. A home run for Cuban football. While the Caribbean island nation of Cuba is renowned for a great many things - vibrant beaches, music and baseball among them - the quality of its football doesn’t often warrant remark. 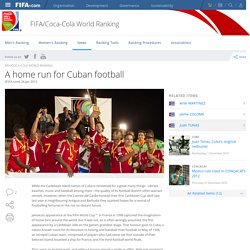 However, when the Leones del Caribe hoisted their first Caribbean Cup aloft late last year in neighbouring Antigua and Barbuda they sparked hopes for a revival of footballing fortunes in the not-so-distant future. Jamaica’s appearance at the FIFA World Cup™ in France in 1998 captured the imagination of footie fans around the world, but it was not, as is often wrongly assumed, the first appearance by a Caribbean side on the game’s grandest stage. That honour goes to Cuba, a nation known more for its devotion to boxing and baseball than football.

Cuban national soccer team player defects, seeks asylum in U.S. Brazilian football club celebrates Che Guevara link. 30 December 2013Last updated at 20:00 ET By Lorena Arroyo BBC Mundo Che Guevara went to see the Brazilian side play in Havana You would be forgiven for thinking that the football players with Che Guevara portraits emblazoned on their jerseys were members of the Cuban national team. 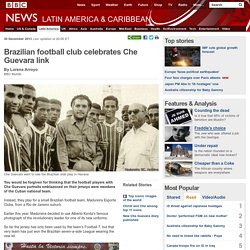 Instead, they play for a small Brazilian football team, Madureira Esporte Clube, from a Rio de Janeiro suburb. Earlier this year, Madureira decided to use Alberto Korda's famous photograph of the revolutionary leader for one of its new uniforms. An Introduction to Cuban Soccer and the Specter of Player Defections - The Bent Musket. Eviel Cordoves left Cuba for the United States in 2012 and now plays for Charleston Battery in USL-Pro - Don McPeak-US PRESSWIRE Get to know a shadowy and mysterious neighbor, Cuba. The island nation is always an odd case in international soccer, as it is in many other aspects, and politics once again affects the selection for the national team leading up to the 2013 Gold Cup.

Football in Cuba. Football is not yet so popular in Cuba. Nevertheless the Cuban government has declared football to be the sport of the 21st century. The Cubans want to promote this sport so that they can then compete internationally. And that explains why the Cuban football association is very interested in Camaquito’s children’s football project. This year the Cuban football association is celebrating its 100th anniversary. New Territory for Global Game. Photo SAN JOSÉ DE LAS LAJAS, Cuba — Ronald Hernandez Vega did not come to see a game played with the hands. There was baseball Monday morning, one and a half innings to complete a rainout in Cuba’s national league. Hernandez Vega did not care. He sat outside the provincial stadium in languid daylight, wearing the jersey not of Yasiel Puig but of Lionel Messi.

Baseball is the sport of Cuba’s revolution, but soccer is the sport of the arriving world. “I like soccer better than baseball,” Hernandez Vega, 16, said as he headed to a nearby field for practice. Baseball seems perfectly suited to this retro island, where the sporting attitudes, like many of the cars, are from the 1950s. Soccer now rivals baseball as the favorite sport of many young Cubans. In a pickup game on Monday in Havana, playing barefoot on slanted asphalt, Marlon Peres Capotes yelled, “Goooooal,” and did a cartwheel each time he kicked a sagging basketball between two chunks of rock. Others spoke freely. Many disagree.