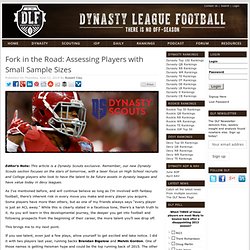 Remember, our new Dynasty Scouts section focuses on the stars of tomorrow, with a laser focus on High School recruits and College players who look to have the talent to be future assets in dynasty leagues and have value today in devy leagues. IDP Manor. Player Rankings: Quarterbacks - PRESEASON. Amari Cooper, Nelson Agholor among top WRs to watch in 2014. The wide-open nature of the college game has helped wide receivers become the marquee playmakers on offense. 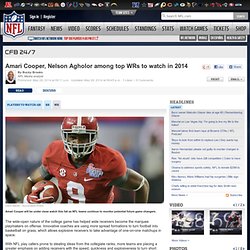 Innovative coaches are using more spread formations to turn football into basketball on grass, which allows explosive receivers to take advantage of one-on-one matchups in space. With NFL play callers prone to stealing ideas from the collegiate ranks, more teams are placing a greater emphasis on adding receivers with the speed, quickness and explosiveness to turn short passes into big gains. As a result, we are seeing more pass-catchers come off the board in the early rounds, including five receivers selected on Day 1 of the 2014 NFL Draft. The 2014 UDFA Class of the NFL: Mining for Gems. 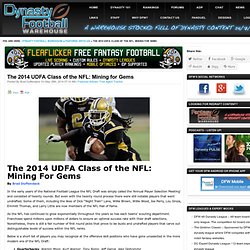 Fantasy rookie report. The conclusion of the NFL draft has an interesting habit of generating hype for the pretenders while eliciting little, if any, buzz for the top-of-the-pecking-order franchises that find a way into the postseason each and every year. 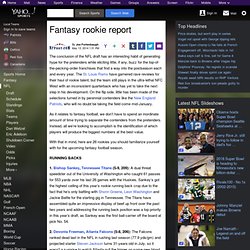 The St. Louis Rams have garnered rave reviews for their haul of rookie talent, but the team still plays in the ultra-lethal NFC West with an inconsistent quarterback who has yet to take the next step in his development. On the flip side, little has been made of the selections turned in by perennial contenders like the New England Patriots, who will no doubt be taking the field come mid-January.

As it relates to fantasy football, we don’t have to spend an inordinate amount of time trying to separate the contenders from the pretenders. 2014 Post-Draft Top 30 Fantasy Football Rookie IDP Rankings for Dynasty Leagues. Share by Email Yesterday, I ranked out my post-Draft top 50 rookies on the offensive side of the ball. 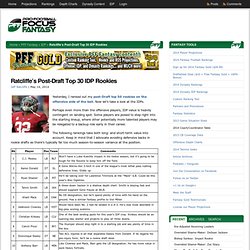 Now let’s take a look at the IDPs. Perhaps even more than the offensive players, IDP value is heavily contingent on landing spot. Some players are poised to step right into the starting lineup, where other potentially more talented players may be relegated to a backup role early in their career. Silva: Dynasty Rookie Rankings - Dynasty Rankings. Quarterbacks Sheer upside is what I foremost seek in a Dynasty rookie quarterback, because opportunity is limited. 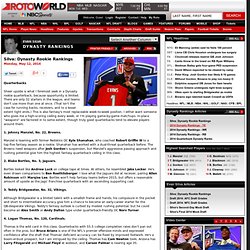 There are only 32 starters in the league, and teams don't use more than one at once. (That isn't the case for running backs, receivers, and to a lesser extent tight ends.) This is also fantasy's most replaceable week-to-week position. I either want someone who gives me a high-scoring ceiling every week, or I'm playing game-by-game matchups. Free Fantasy Football Cheatsheets & Rankings - FFToolbox.com. 2014 NFL Draft: 10 players teams will regret passing on. If there's one constant for players not picked in the top five of the draft, it's their inevitable sound bite about how they'll make teams that passed on them regret it in the NFL. 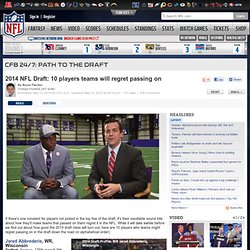 While it will take awhile before we find out about how good the 2014 draft class will turn out, here are 10 players who teams might regret passing on in the draft down the road (in alphabetical order): Jared Abbrederis, WR, Wisconsin Drafted: Packers, 176th overall (5th round) Analysis: Just ask Big Ten fans how happy they are to see Abbrederis in the NFL and not back at Wisconsin. A former walk-on, he's put in the hard work to reach this point and is one of the more polished pass catchers in the draft. Mike Mayock's position rankings for 2014 NFL Draft. » Mayock's pre-combine rankings | Post-combine rankings | Post-pro days rankings Mike Mayock's fourth edition of his position-by-position prospect rankings for the 2014 NFL Draft: Quarterback 1. 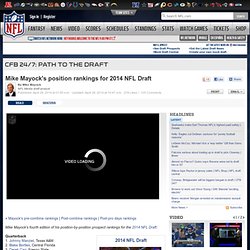 Johnny Manziel, Texas A&M 2. Blake Bortles, Central Florida 3. 2014 NFL Draft tiers: Elite prospects, blue chips and red chips. The collection of prospects who will be available in the 2014 NFL Draft is widely considered one of the most talented in recent memory. 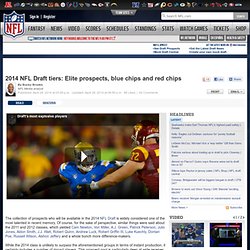 32 Teams, 64 Dynasty Targets - Goal Line Stand. With free agency over for the most part and a little time to pass before next month's draft, it feels like a prime time to dive into some fantasy football talk. 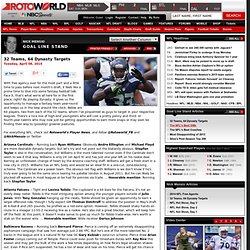 Face it, that's what we're all here for in the first place, right? By playing dynasty, it gives us the opportunity to manage a fantasy team year-round and keeps us in the loop around the clock. Below are 64 players, two from each of the 32 teams, whom I've pinpointed as guys to target in your respective leagues. There's a nice mix of high-end youngsters who will cost a pretty penny and third- or fourth-year talents who may now just be getting opportunities to earn more snaps or may soon be finding their way to (possibly) greener pastures. For everything NFL, check out Rotoworld's Player News, and follow @Rotoworld_FB and @NickMensio on Twitter. Arizona Cardinals -- Running back Ryan Williams: Obviously Andre Ellington and Michael Floyd are more desirable dynasty targets, but let's try and not point out the blatantly obvious. Fantasy Football Today.

Fantasy Football Librarian: 2013 Fantasy Football Accuracy Results Are In! Greetings and welcome to the 2013 results of the fantasy football accuracy contest that I run each year in conjunction with the Fantasy Sports Trade Association (FSTA). This is my 7th year of the rankings contest and I am thrilled to once again report back on which sites' preseason rankings have proven most accurate. There were 59 participants in this year's contest and on Thursday night, the top sites were revealed at the FSTA's Winter Conference in Las Vegas. Participants were asked to submit their top 25 QBs, 50 RBs, 50 WRs, and 20 TEs using a standard scoring system as listed below: Passing Yards (25 yards per point) Passing Touchdowns (4) Rushing Yards (10 yards per point) Reception Yards (10 yards per point) Rushing & Receiving Touchdowns (6)

Dynasty Deep Dive - Marlon Brown, WR. Written by Matt Southall The Baltimore Ravens entered the 2013 season as the defending Super Bowl Champions, but the team lost many key players from both sides of the ball during last off season. Anquan Boldin left to sign with the 49ers, Jacoby Jones was expected to follow in the footsteps Boldin left behind, and a slew of defensive players left for other teams who were willing to fork over the extra cash. Jones went down in the season opener against the Denver Broncos, and rookie WR Marlon Brown was thrust into the spotlight right out of the gate.

Brown stands 6’5” tall and weighs 205 lbs. 2013 Offensive Line Rankings. Share by Email Awards week is still ongoing and so what better time than to announce our 2013 Offensive Line Rankings. That’s right those big guys up front who don’t post positive stats with their reputation often a product of where they play or where they were drafted are now getting the attention they deserve. For some that’s good and for that is most definitely bad. The IDP Guru. Dynasty Philosophy 101. Fantasy Football Evil Empire. Real and Fantasy: Individual Defensive Player (IDP) Targets in 10 - 14 Team Dynasties.

Individual defensive players account for 40 to 60 percent of a starting lineup in leagues that include these players. This part of a team is often neglected because, when looking for talent that could emerge, people want to roster that eighth running back or that tenth wide receiver (who will most likely never be part of their starting line up). When I started playing in IDP leagues, I did the same thing, but when I saw teams with far less quality offensive talent walk away with the big prize, I made changes to my philosophy of building a roster. NFL Draft: Norris' Top 100 - Rankings. Quarterbacks are not just thrown in among other positions; there is a thought process behind their slotting.

If I firmly believe a quarterback is a quality starter, they transcend the board and jump to the top. The next tier, which includes prospects I think have a good chance of becoming quality starters, follows first-round talents. QB Metrics featuring Teddy Bridgewater, Derek Carr, Blake Bortles and Johnny Manziel. TOP 30 Offensive PPR Rookies 2014. Fantasy Football Today. Pre-Combine Rookie RB Rankings: Dynasty Perspective. Fantasy Football News, Footblog.com. Rookie Mock 2.0 - Post Combine Round 2. Intro: Dan and Dan are back once again to finish up their two round mock now that the combine and come and gone. The combine is a fascinating event that brings the best football players from the college ranks and makes them do random feats of athleticism in the hopes of ascertaining a greater idea of what kind of professional football player they will be.

There are many things to be gained by these events, and often times nothing at all. Its picking and choosing which ones are important that matter. Last month we took an early look at this draft class and, since this is combine time, we thought it was the perfect time to revisit it. 2014 Rookie Mock Draft 2.0 - Post Combine. Intro: The combine is a fascinating event that brings the best football players from the college ranks and makes them do random feats of athleticism in the hopes of ascertaining a greater idea of what kind of professional football player they will be.

As our resident WR guru, Jon’s list is heavy on wide receivers, and if you’re stocked elsewhere, you need to starting making trades for those players. I tend to go WR early and often in my drafts and so find myself intrigued by the prospect of bolstering my RB corps with guys who could suddenly find themselves atop the depth chart. 1. Benny Cunningham, RB, St. Louis Rams RotoViz absolutely loved Zac Stacy heading into the 2013 season, and that enthusiasm paid off in a big way.

Fantasy Football Draft Guide .. Rotoworld.com - Fantasy Sports. The Next Jordan Cameron. Stash Me if You Can – Dynasty Sleepers for Fantasy Football 2014 « Fantasy Sports Advice for Football, Baseball, and Basketball – FantasySmackTalk.com. Dynasty Stashes: Players to grab with an eye towards 2014. Fantasy football seasons are winding down, and if you’re anything like me you are not ready to give up the weekly enjoyment that comes from setting lineups, talking trades with leaguemates and scouring the waiver wire for potential hidden gems.