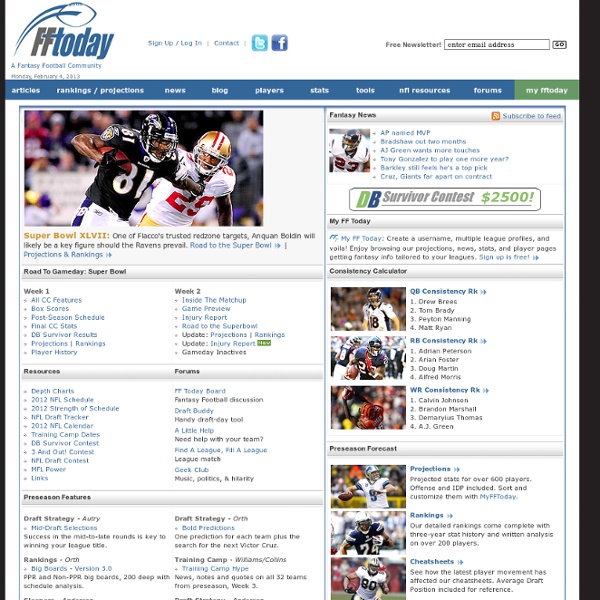 Fantasy Football Librarian: 2013 Fantasy Football Accuracy Results Are In! Greetings and welcome to the 2013 results of the fantasy football accuracy contest that I run each year in conjunction with the Fantasy Sports Trade Association (FSTA). This is my 7th year of the rankings contest and I am thrilled to once again report back on which sites' preseason rankings have proven most accurate. There were 59 participants in this year's contest and on Thursday night, the top sites were revealed at the FSTA's Winter Conference in Las Vegas. Participants were asked to submit their top 25 QBs, 50 RBs, 50 WRs, and 20 TEs using a standard scoring system as listed below: Passing Yards (25 yards per point) Passing Touchdowns (4) Rushing Yards (10 yards per point) Reception Yards (10 yards per point) Rushing & Receiving Touchdowns (6)

Mid-Draft Targets Well-known players who can't be sleepers, but will likely have a better season than is assumed by the public. Profiled players include Jay Cutler, Josh Freeman, Peyton Hillis, C.J. Spiller, and Darrius Heyward-Bey. by Rob Warner, Friday, August 17, 2012 3:12:26 PM CDTFFToolbox.com

DVD Talk Forum - What&#039;s the best Fantasy Football magazine to use? Really -- all the magazines are virtually the same and carry the same amount of -- to an extent -- worthlessness. The information is typically standard fare and is usually outdated by the time it hits the shelves. There is DEFINITLEY a poor ROI when you consider how much they cost vs. how much info they give. The first thing to do is look at your scoring system -- this can have a dramatic effect on player rankings -- i.e. PPR, QB scoring vs.

Dynasty Deep Dive - Marlon Brown, WR Written by Matt Southall The Baltimore Ravens entered the 2013 season as the defending Super Bowl Champions, but the team lost many key players from both sides of the ball during last off season. Anquan Boldin left to sign with the 49ers, Jacoby Jones was expected to follow in the footsteps Boldin left behind, and a slew of defensive players left for other teams who were willing to fork over the extra cash. Jones went down in the season opener against the Denver Broncos, and rookie WR Marlon Brown was thrust into the spotlight right out of the gate.

Free Fantasy Football Top 200 Rankings Updated Wednesday, July 24, 2013 Here are the top 200 player rankings for a 12 team performance-based league that requires starters of 1QB, 2RB, 2WR, 1TE, 1K, and 1DEF. To see rankings tailored for your league, Login or Register -- it's free! For additional scoring options, please login or register -- it's free! *Our free draft kit with the top 200 player rankings are based on a scarcity formula we call "fantasy weight". Football Docs EVERYTHING for only $11.95! NEW EXCEL VERSION of Draft Advisor Software! The Excel Version has all the functionality of the traditional Draft Advisor in an Excel package, as well as provides some expanded capability such as generating custom Auction Values based on your league scoring system and the ability to change predicted stats.

32 Teams, 64 Dynasty Targets - Goal Line Stand With free agency over for the most part and a little time to pass before next month's draft, it feels like a prime time to dive into some fantasy football talk. Face it, that's what we're all here for in the first place, right? By playing dynasty, it gives us the opportunity to manage a fantasy team year-round and keeps us in the loop around the clock. Below are 64 players, two from each of the 32 teams, whom I've pinpointed as guys to target in your respective leagues.