Myth of Creative Inspiration: Great Artists Don't Wait for Motivation. Franz Kafka is considered one of the most creative and influential writers of the 20th century, but he actually spent most of his time working as a lawyer for the Workers Accident Insurance Institute. 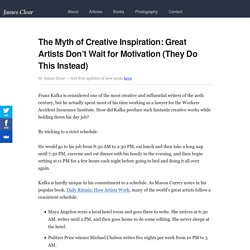 How did Kafka produce such fantastic creative works while holding down his day job? By sticking to a strict schedule. He would go to his job from 8:30 AM to 2:30 PM, eat lunch and then take a long nap until 7:30 PM, exercise and eat dinner with his family in the evening, and then begin writing at 11 PM for a few hours each night before going to bed and doing it all over again.

Kafka is hardly unique in his commitment to a schedule. As Mason Currey notes in his popular book, Daily Rituals: How Artists Work, many of the world’s great artists follow a consistent schedule. Maya Angelou rents a local hotel room and goes there to write. The work of top creatives isn’t dependent upon motivation or inspiration, but rather it follows a consistent pattern and routine. Here’s why… P.S. All Ideas Are Second-Hand: Mark Twain on Plagiarism and Originality, in a Letter to Helen Keller. The combinatorial nature of creativity is something I think about a great deal, so this 1903 letter Mark Twain wrote to his friend Helen Keller, found in Mark Twain’s Letters, Vol. 2 of 2 (public library | IndieBound), makes me nod with the manic indefatigability of a dashboard bobble-head dog. 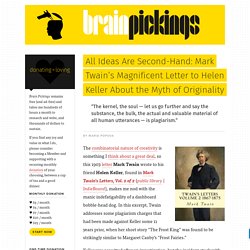 In this excerpt, Twain addresses some plagiarism charges that had been made against Keller some 11 years prior, when her short story “The Frost King” was found to be strikingly similar to Margaret Canby’s “Frost Fairies.” Keller was acquitted after an investigation, but the incident stuck with Twain and prompted him to pen the following passionate words more than a decade later, which articulate just about everything I believe to be true of combinatorial creativity and the myth of originality: Oh, dear me, how unspeakably funny and owlishly idiotic and grotesque was that ‘plagiarism’ farce! How to Uncover Your Creative Talent by Using the "Equal Odds Rule" Paul Erdos was a strange man. 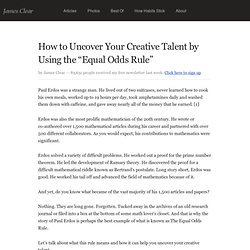 He lived out of two suitcases, never learned how to cook his own meals, worked up to 19 hours per day, took amphetamines daily and washed them down with caffeine, and gave away nearly all of the money that he earned. [1] Erdos was also the most prolific mathematician of the 20th century. He wrote or co-authored over 1,500 mathematical articles during his career and partnered with over 500 different collaborators. As you would expect, his contributions to mathematics were significant. Erdos solved a variety of difficult problems. And yet, do you know what became of the vast majority of his 1,500 articles and papers? Nothing. How to Find Your Hidden Creative Genius. There is a interesting story about how Pablo Picasso, the famous Spanish artist, developed the ability to produce remarkable work in just minutes. 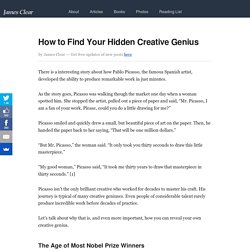 As the story goes, Picasso was walking though the market one day when a woman spotted him. She stopped the artist, pulled out a piece of paper and said, “Mr. Picasso, I am a fan of your work. Please, could you do a little drawing for me?” Picasso smiled and quickly drew a small, but beautiful piece of art on the paper. “But Mr. “My good woman,” Picasso said, “It took me thirty years to draw that masterpiece in thirty seconds.” [1] Picasso isn’t the only brilliant creative who worked for decades to master his craft. Let’s talk about why that is, and even more important, how you can reveal your own creative genius.

The Age of Most Nobel Prize Winners A recent study tracked the ages of Nobel Prize winners, great inventors, and scientists. These findings match the work done by previous researchers as well. 33 Ways To Stay Creative. 36 Surprising Ways to Boost Creativity For Free. No Idea Left Behind: 25 Tools for Capturing Ideas Anywhere. As a serial entrepreneur, I’m addicted to ideas. 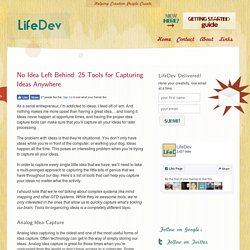 I feed off of ’em. And nothing makes me more upset than having a great idea… and losing it. Ideas never happen at opportune times, and having the proper idea capture tools can make sure that you’ll capture all your ideas for later processing. The problem with ideas is that they’re situational. You don’t only have ideas while you’re in front of the computer, or walking your dog.

Tools for creating ideas. SCAMPER a creative thinking technique. How to Uncover Your Creative Talent by Using the "Equal Odds Rule" Amazing Little Flip Books Use Negative Space and Secret Compartments. These fun little flip books made in Japan feature a number of unexpected designs that make use of negative space and secret “compartments” that are gradually revealed as you flip through the books. 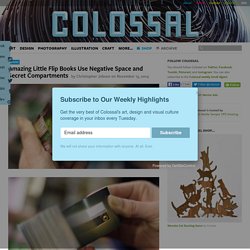 There are several books in the series published by Mou Hitotsu no Kenkyujo and you can pick them up on Amazon. Here’s the bug one. (via Travelry) Update: Flipbooks are now available in the Colossal Shop. Beach Art. Art - miniatures. Lennon. Lennon.