SMS to the emergency services. TinEye Reverse Image Search. Snopes.com: Urban Legends Reference Pages. Art of War by SunTzu [SunZi] -English Hypertext. Translated from the Chinese By LIONEL GILES, M.A. (1910) [This is the basic text of Sun Tzu on the Art of War. It was extracted from Mr. Giles' complete work as titled above.

The commentary itself, which, of course includes this work embedded within it, has been released as suntzu10.txt (or suntzu10.zip). This is being released only as an adjunct to that work, which contains a wealth of commentary upon this text.] The Art of War has 13 chapters. Each chapter is hyper-linked to its corresponding Chinese text. Aldwych Underground Station. The Aldwych branch of the Piccadilly Line has always been strange in that although it was operated as a basic single train shuttle service from early on in its life, the line was originally built as a double track, with two platforms at Aldwych and two platforms at Holborn, only one of which connected to the North bound Piccadilly line, the other terminating in a bay platform (see here for more details). 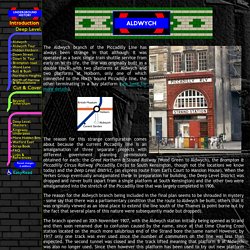 The reason for this strange configuration comes about because the current Piccadilly line is an amalgamation of three separate projects with different government planning permissions obtained for each; the Great Northern & Strand Railway (Wood Green to Aldwych), the Brompton & Piccadilly Circus Railway (Piccadilly Circus to South Kensington, though not the locations we know today) and the Deep Level District, (an express route from Earl's Court to Mansion House). Grand Guignol. Promotional poster for a Grand Guignol performance Le Théâtre du Grand-Guignol (French pronunciation: ​[ɡʁɑ̃ ɡiɲɔl]: "The Theater of the Big Puppet") – known as the Grand Guignol – was a theatre in the Pigalle area of Paris (at 20 bis, rue Chaptal). 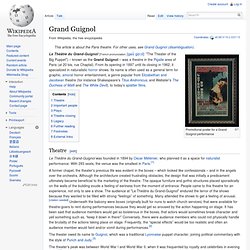 From its opening in 1897 until its closing in 1962, it specialized in naturalistic horror shows. Its name is often used as a general term for graphic, amoral horror entertainment, a genre popular from Elizabethan and Jacobean theatre (for instance Shakespeare's Titus Andronicus, and Webster's The Duchess of Malfi and The White Devil), to today's splatter films. Theatre[edit] Zen Koans - AshidaKim.com. Sticking-out Buttocks - Paleolithic Age - Beaverland Historica - Wonders and Mysteries of the ancient World History. 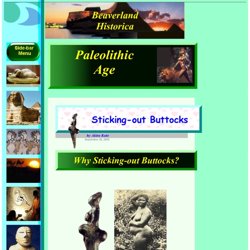 If you take a look at the venus of Monpazier, you might think that this figurine has extremely exaggerated abdomen and buttocks. But, in those remote days, women appeared fat with a sticking-out bottom and a slightly protruding abdomen as you find in the Paleolithic venuses . Even today, in some parts of Africa, you might be able to meet some women with the shape of the Monpazier venus as shown above. And there is a good reason why the buttocks stick out like that if you take a look at the picture at right. In the paleolithic days, gathering food must be a crucial task for women and men. One historian wrote fifty years ago, “The Venuses are “sculptures of feminine form, with the maternal parts grossly exaggerated”.

So, laymen naturally think that those figurines might have come out of imagination. If we look back to the fairly recent history (though some 3500 years ago), we can take a look at the famous queen of Punt. Into Africa. Pyrography. The White Horse. 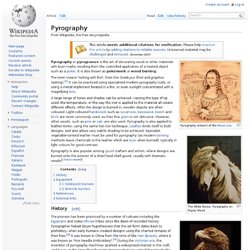 Pyrography on Poplar Wood The Tawny Eagle. Davide Della Noce pyrography Pyrography or pyrogravure is the art of decorating wood or other materials with burn marks resulting from the controlled application of a heated object such as a poker . It is also known as pokerwork or wood burning . The term means "writing with fire", from the Greek pur (fire) and graphos (writing). [ 1 ] It can be practiced using specialized modern pyrography tools, or using a metal implement heated in a fire, or even sunlight concentrated with a magnifying lens . A large range of tones and shades can be achieved. Pyrography is also popular among gourd crafters and artists, where designs are burned onto the exterior of a dried hard-shell gourd, usually with dramatic results [ citation needed ] .

The Thoughts of the Emperor Marcus Aurelius Antoninus. Key of Solomon. One of the pentacles found in the "Key of Solomon" manuscripts. 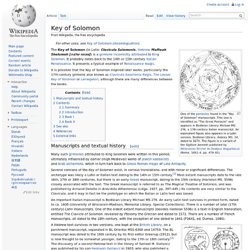 This one is identified as "The Great Pentacle" and appears in Bodleian Library Michael MS. 276, a 17th-century Italian manuscript. An equivalent figure also appears in a Latin version, Bodleian Library, Aubrey MS. 24, dated to 1674. The figure is a variant of the Sigillum Aemeth published by Athanasius Kircher in Oedipus Aegyptiacus (Rome, 1652–4, pp. 479–81).

The Key of Solomon (in Latin: Clavicula Salomonis , Hebrew : Mafteah Shelomoh [מפתח שלמה] ) is a grimoire incorrectly attributed to King Solomon . It probably dates back to the 14th or 15th century Italian Renaissance . It is possible that the Key of Solomon inspired later works, particularly the 17th-century grimoire also known as Clavicula Salomonis Regis , The Lesser Key of Solomon or Lemegeton , although there are many differences between the books. Manuscripts and textual history [ edit ] An important Italian manuscript is Bodleian Library Michael MS 276. Kübler-Ross model 5 stages of grief. The Kübler-Ross model , commonly referred to as the " five stages of grief ", is a hypothesis introduced by Elisabeth Kübler-Ross [ 1 ] and says that when a person is faced with the reality of impending death or other extreme, awful fate, he or she will experience a series of emotional stages: denial, anger, bargaining, depression , and acceptance (in no specific sequence [ citation needed ] ). 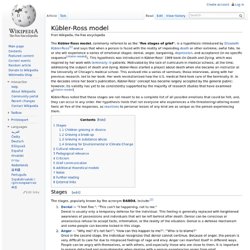 This hypothesis was introduced in Kübler-Ross' 1969 book On Death and Dying , which was inspired by her work with terminally ill patients. Motivated by the lack of curriculum in medical schools, at the time, addressing the subject of death and dying, Kübler-Ross started a project about death when she became an instructor at the University of Chicago's medical school. This evolved into a series of seminars; those interviews, along with her previous research, led to her book. Her work revolutionized how the U.S. medical field took care of the terminally ill.