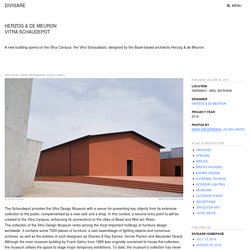 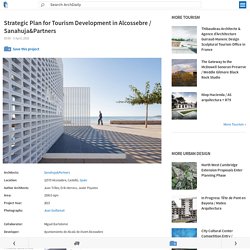 The project, located in the coastal town of Alcossebre, is part of a Strategic Plan for Tourism Developmet in agreement with the Polytechnic University of Valencia and whose purpose is to promote tourism in the area through small spaces, buildings and activities of design. The intervention is in the Paseo Vista Alegre, a privileged way along the promenade. It aims to eliminate the permanent traffic street, peatonalizar the vial, and renovate the small tourist office.

The implementation of the Strategic Plan for Tourism Design has resulted in a series of specific works in the village with a global vision, renewing its image and enhancing the development of local tourism. AD Classics: Vitra Fire Station / Zaha Hadid Architects. Architects Location Architect Zaha Hadid References Galinsky, Zaha Hadid Architects Project Year 1993 Photographs From the architect. 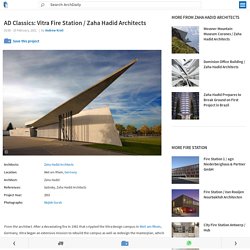 After a devastating fire in 1981 that crippled the Vitra design campus in Weil am Rhein, Germany, Vitra began an extensive mission to rebuild the campus as well as redesign the masterplan, which was designed by Nicholas Grimshaw. Almost a decade after the devastating fire in 1981, the company sought an architect to build a fire station for the Vitra campus to thwart any future reoccurrences and commissioned Zaha Hadid. Completed in 1993, the Vitra fire station would be Hadid’s first realized project of her career, which would eventually launch her name and style to an international audience. The Vitra fire station is Hadid's showcased work that delves into the deconstructivist theoretical language that she developed through her paintings as a conceptual mediator of finding spatial relationships and form. 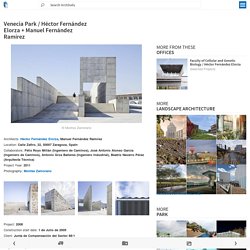 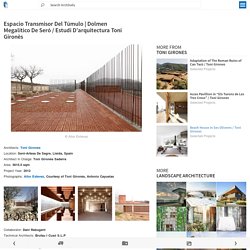 Y Construcciones Germans Gilaber S.L. Construction Manager: Ignasi Gilabert Industrial Principals: Instal·Lacions Vilana S.L., Fusteria Gilibet S.L. Szentkút Pilgrim Center / Tamas Nagy. Ground Control: How Concrete Reshapes Our Relationship to the Earth. Concrete has long had a close relationship with the earth; as the favorite material for the creation of building foundations, one of its most common uses is effectively as a more reliable replacement for soil. 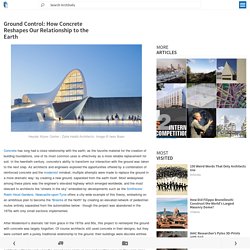 In the twentieth century, concrete’s ability to transform our interaction with the ground was taken to the next step. As architects and engineers explored the opportunities offered by a combination of reinforced concrete and the modernist mindset, multiple attempts were made to replace the ground in a more dramatic way: by creating a new ground, separated from the earth itself. Most widespread among these plans was the engineer’s elevated highway which emerged worldwide, and the most relevant to architects the “streets in the sky” embodied by developments such as the Smithsons’ Robin Hood Gardens. After Modernism’s dramatic fall from grace in the 1970s and 80s, this project to reinterpret the ground with concrete was largely forgotten. 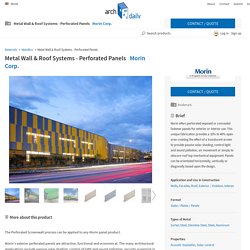 Morin's exterior perforated panels are attractive, functional and economical. The many architectural applications include passive solar shading, control of light and sound pollution, security screening in parking garages and stair towers or to simply obscure roof top mechanical equipment. Please note the examples of our perforating options are only representative of the hole size and overall general pattern and not of the actual hole spacing.

We are happy to supply you with a metal perforated chip for your review. - Note: Because panels are perforated after the paint finish is applied, the use of steelpanels in exterior applications is not recommended due to corrosion. - The examples of our perforating options are only representative of the hole size and overall general pattern and not of the actual hole spacing. Streamsong Resort / Alfonso Architects. Architects: Alfonso Architects Location: Streamsong Drive, Bowling Green, FL 33834, USA Lead Architect: Alberto Alfonso, AIA Project Year: 2014 Photographs: Albert Hurley Contractor: PCL Construction Owner: The Mosaic Company From the architect. 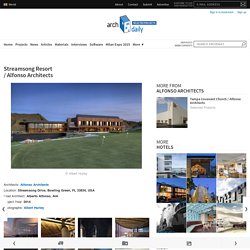 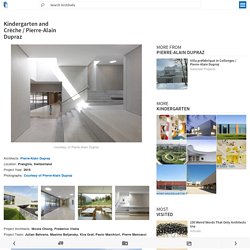 The new Prangins kindergarten is conceived as one big house that has been placed on a sloping site. The cruciform structure resulting from the interlocking volumes allow it to have a special relationship with the neighbouring ensemble. The four volumes, which are mutually staggered by a third of each unit’s floor height and interleaved, make the building appear to be smaller and visually less obtrusive. The six classrooms are organised in groups of two and occupy the three lower volumes. Horse Stable / 57STUDIO. Architects: 57STUDIO Location: Coelemu, Bío Bío Region, Chile Architects in Charge: Maurizio Angelini, Benjamín Oportot Collaborators: Marcelo Lepín, Josefina Mendoza Area: 140.0 sqm Project Year: 2015 Photographs: Maurizio Angelini From the architect. 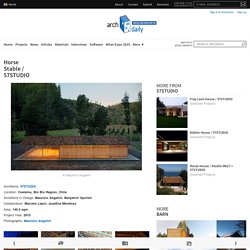 Replacing an existing structure used as a barn on a farm in the region of Bio Bio, it is requested to rebuild a higher-capacity version with 4 stables, 2 cellars and 1 trough. Because of the distance and the labour shortage, it is devised a mechanized construction system to be assembled on the site by two carpenters on a short time. The system combines a series of galvanized steel precast units with pine wood modular elements and the reuse of old demolition roof tiles. Throughout a grid of 3 x 3 meters is configured a rectangular floor plant of 6 x 18 meters, defined by a structure of steel posts and crossbars that supports a series of wooden rafters and an open gable roof. Kinderkrippe Pollenfeld / KÜHNLEIN Architektur. Architects: KÜHNLEIN Architektur Location: Pollenfeld, Germany Area: 210.0 sqm Project Year: 2013 Photographs: Erich Spahn.