What Makes A Story Successful On Facebook? National Public Radio has been wondering: What makes a story tick on Facebook? 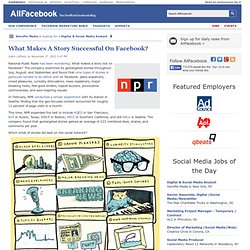 The company examined its geotargeted stories throughout July, August, and September, and found that nine types of stories in particular tended to do rather well on Facebook: place explainers, crowd pleasures, curiosity stimulators, news explainers, major breaking news, feel-good smilers, topical buzzers, provocative controversies, and awe-inspiring visuals. In February, NPR conducted a similar experiment with its station in Seattle, finding that the geo-focused content accounted for roughly 12 percent of page visits in a month. This time, NPR expanded the test to include KQED in San Francisco; KUT in Austin, Texas; WBUR in Boston; KPCC in Southern California; and still KPLU in Seattle. The company found that geotargeted stories gained an average of 223 combined likes, shares, and comments per post. 7 Social Media Marketing Tips for Artists and Galleries. This post originally appeared on the American Express OPEN Forum, where Mashable regularly contributes articles about leveraging social media and technology in small business. 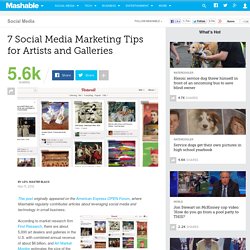 According to market research firm First Research, there are about 5,000 art dealers and galleries in the U.S. with combined annual revenue of about $6 billion, and Art Market Monitor estimates the size of the overall global art market to be around $15 billion annually. There are also more than 200,000 fine artists working in the U.S., according to recent research by the National Endowment for the Arts. But while fine art is big business, there is often a wide chasm between the creative process that makes a great artist or a sophisticated gallery owner, and the marketing process that drives branding and sales. “For the majority of artists, success will ultimately come down to their effectiveness in marketing,” says Darius Himes, Assistant Director of fine art photography gallery Fraenkel Gallery in San Francisco. 1. Social Media for Photographers: Facebook. When it comes to being a photographer, there is no shortage of online networks waiting for you to share your images, interact with others and potentially grow your business. 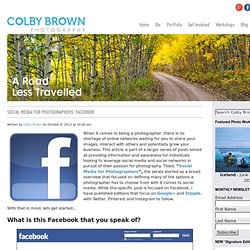 This article is part of a larger series of posts aimed at providing information and awareness for individuals looking to leverage social media and social networks in pursuit of their passion for photography. Titled, “Social Media for Photographers“, the series started as a broad overview that focused on defining many of the options a photographer has to choose from with it comes to social media. While this specific post is focused on Facebook, I have published editions that focus on Google+ and Stipple, with Twitter, Pinterest and Instagram to follow. With that in mind, lets get started… What is this Facebook that you speak of? 17 Social Media Cheat Sheets. These days, small businesses use a variety of social media sites in their marketing efforts. 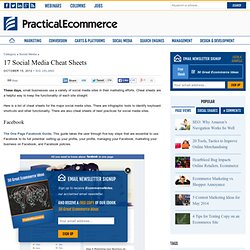 Cheat sheets are a helpful way to keep the functionality of each site straight. Here is a list of cheat sheets for the major social media sites. There are infographic tools to identify keyboard shortcuts and other functionality. Buffer - A Smarter Way to Share on Social Media. Are you looking for the new App.net. The Most Annoying Person on Facebook [COMIC] Google+ Facts and Figures [infographic] The 6 Types Of Social Media User – Which Are You? [INFOGRAPHIC] INSANE Graphic Shows How Ludicrously Complicated Social Media Marketing Is Now. 10 Best Facebook Campaigns That Won't Be Seen In America.

Social media outranks TV as UK's favourite pastime. Social media has overtaken television as the favourite hobby of 16-24 year-olds, according to a new UK study by Click Consult. 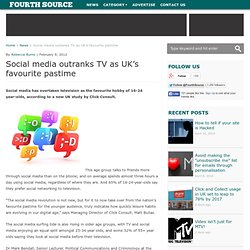 This age group talks to friends more through social media than on the phone; and on average spends almost three hours a day using social media, regardless of where they are. And 65% of 16-24-year-olds say they prefer social networking to television. “The social media revolution is not new, but for it to now take over from the nation’s favourite pastime for the younger audience, truly indicates how quickly leisure habits are evolving in our digital age,” says Managing Director of Click Consult, Matt Bullas. 10 Tips & Tricks For Your Business's Facebook Fan Page. Facebook is one the fastest growing social media network and its users are increasing by thousands every day.

Due to its vast base of users, it takes no effort to acknowledge its influence and any company will jump on the bandwagon to utilize Facebook because it allows them to boost their brands or products also in the same time engage with possible clients. It is convenient for a company to create a Facebook page, publish their profile and products however, setting up a Facebook page that receive many "likes" and a huge fan base is never an easy task. Use Multimedia to Tell Stories. By Sally Falkow PR Newswire recently took a look at how press releases sent on the wire perform in terms of number of views. 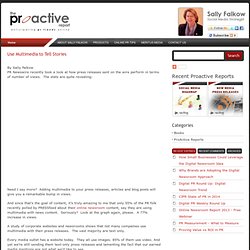 The stats are quite revealing: Need I say more? Adding multimedia to your press releases, articles and blog posts will give you a remarkable bump in views. And since that’s the goal of content, it’s truly amazing to me that only 55% of the PR folk recently polled by PRESSfeed about their online newsroom content, say they are using multimedia with news content. The best free social media tracking tools you should know about. Measuring social media is one of the areas of online marketing that is still frequently discussed and we still haven’t found that magic number yet! 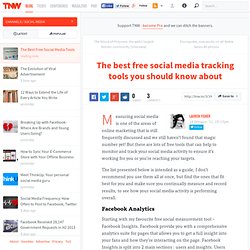 But there are lots of free tools that can help to monitor and track your social media activity to ensure it’s working for you or you’re reaching your targets. How Pinterest Drive More Online Sales Than Other Network [Infographic] Just a few weeks ago we were reading about how Pinterest monthly visitor growth was slowing down. 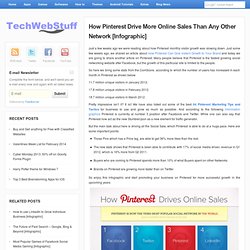 Just some few weeks ago, we shared an article about How Pinterest Can Give Instant Growth to Your Brand and today we are going to share another article on Pinterest. Many people believe that Pinterest is the fastest growing social networking website after Facebook, but the growth of this particular site is limited to the people. So here we bring some stats from the ComScore, according to which the number of users has increased in each month in Pinterest as shown below 11.7 million unique visitors in January 2012. 17.8 million unique visitors in February 2012. 18.7 million unique visitors in March 2012. Facebook Subscribe Suggestions: 50 People In Media To Follow. Our 7 Tenets of Future Storyworlds. At the European Broadcast Union (EBU) TV Summit in Copenhagen last week, Transmedia Storyteller Ltd founder and CEO, Robert Pratten, presented our vision for future storyworlds: PERVASIVE – Available on any device, anywhere and at any time. 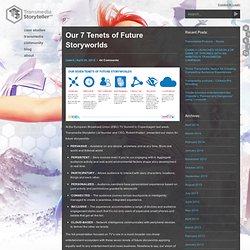 Blurs real world and fictional world. Clothes, Books Said Most Popular US Purchases on Mobile Devices. By MarketingCharts staff 1 in 5 Shop on Overseas Sites; Security Fears Prevalent Data from WorldPay’s “Global Online Shopper Report” indicates that 22% of the US respondents shop on overseas websites, although they do have concerns about doing so. 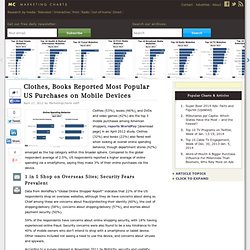 Chief among these are concerns about fraud/protecting their identity (60%), the cost of shipping/delivery (58%), concerns about shipping/delivery (57%), and worries about payment security (50%). 59% of the respondents have concerns about online shopping security, with 18% having experienced online fraud. Security concerns were also found to be a key hindrance to the 40% of mobile owners who don’t intend to shop with a smartphone or tablet device. According to a survey released in November 2011 by Motricity, security and usability concerns were the top mobile shopping deterrents, each cited by 32% of the respondents.

Why Facebook Social Reading Apps Don't Work. Facebook has begun showing some users a "Trending Articles" section right inside their news feeds, whether they want it or not. It's the most aggressive strategy Facebook has tried yet to push people to use Open Graph reading apps. Could it be that the most annoying feature of Facebook isn't catching on? Gosh. Who'da thunk? The new "Trending Articles" tab appears right inside the news feed using a stark gray bar, just like trending items on Google+. How to post on Google+ & Facebook at the same time « TweaknTip. 35 Statistics That Fuel the Battle Between Pinterest and Google+ As the two newest social networks, Google+ and Pinterest have gotten a lot of attention recently.

It's no surprise. Each has experienced rapid growth and adoption, leaving marketers wondering how to effectively leverage each new platform for business. The 9 Most Creative Uses Of Pinterest. In what seemed like no time (but was, in fact, several years), Pinterest went from a talking point for digital elites to a de rigueur social tool for just about every person, media company and, of course, brand. According to data compiled by online consumer behavior firm Experian Hitwise, Pinterest saw 104 million visits in March, a strong third-place finish behind Facebook with 7 billion and Twitter with 182 million.

Marketing Monitor all your marketing channels like email, SEO, SEM, social media, and analytics from one place. Blog writing wisdom. 77% Of Consumers Would Buy From Your Company If Your CEO Was Tweeting [STUDY] 100+ Professional Social Media Business Tools for Brands and Marketers. This post is #7 in DailyTekk’s famous Top 100 series which explores the best startups, gadgets, apps, websites and services in a given category. Total items listed: 125. 16 Social Media Mistakes You're Making. Klout - The Standard for Influence.

Mirror.me. Create Infographics. The Museum of Me. A Year In The Like. It’s a Small World After All: The Top Global Web Trends. Social media is a global phenomenon indeed. Certainly Facebook, Twitter, Google+, in their own way, each make the world a much smaller place. The distance between any two people is shrinking as the number of network connections continues to proliferate. I’m sure you’ve heard at one point or another, that the distance between two people in an offline world is six degrees. In a recent Facebook study for example, the average degree of separation between two people in the network is only 4.74. When focused on one country specifically, such as the U.S., Sweden, or Italy, among others, the number of hops between two people further shrinks to 3.74.

9 Powerful Free Infographic Tools To Create Your Own Infographics - DATA VISUALIZATION. Once You’re In the Weird Part of YouTube, There’s No Way Out. Rob Shap (not his real name) never thought “Bird Face” would go viral. He was just testing the camera on his new Macbook Pro when he recorded himself, shirtless, in his Brooklyn apartment and added some special effects. But something happened when the video made its way to that weird corner of YouTube from which there is no return.

Three years later, the “Bird Face” video has been viewed more than 1.2 million times. The Rise of Bird Face. The most comprehensive twitter app list you'll ever need. Twitter has become a remarkably diverse tool; what used to be text based has evolved into something greater, incorporating multimedia, links and info far beyond what was originally intended thanks to the creativity of programmers and the twitter community. But with so many new apps already available and more being released by the day, trying to discover what useful and what isn't is time consuming. Flowchart: Should Your Business Be On Pinterest? Social vs Search: The Showdown [Infographic] Two of the ascendant methods of driving traffic to your business are social media and search marketing.

What About Me? A Picture of My Digital Life. Empire Avenue: The Social Stock Market. Be Discovered!Scoop. 7 Facebook Behavior Patterns That Could Never Exist Offline. Infographic Reveals The Best Times To Post To Twitter & Facebook. Daily design for everyone.

Should Bloggers and Link-Sharing Sites Get Credit for Discovering Content? 21 Ways to Create Compelling Content When You Don’t Have a Clue. Identified.com Seeks to Make Professional Networking More Fun. Pinterest Changes Improve Storytelling. Pinterest, The Fancy and the Photo Funnel. In Age of Pinterest, Instagram, Marketers Need An Image Strategy. Visual Culture Is Taking Over and Other Insights From Media. How Pinterest Can Turn Your Brand Red-Hot [INFOGRAPHIC]