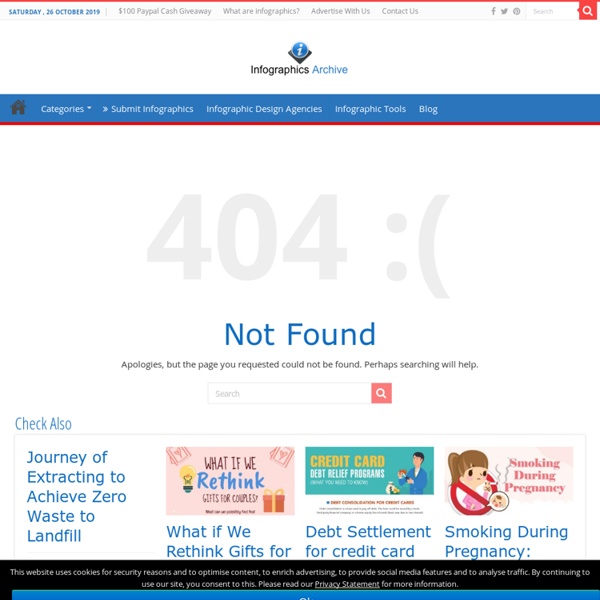 Michael Cerdeiros - Cerious Productions Changelog and Updates The following websites were part of the original list but they are either no longer available or have been replaced with better alternatives. 327k Shares Guardian Datablog's top tools What data visualisation tools are out there on the web that are easy to use - and free? Here on the Datablog and Datastore we try to do as much as possible using the internet's powerful free options. That may sound a little disingenuous, in that we obviously have access to the Guardian's amazing Graphics and interactive teams for those pieces where we have a little more time - such as this map of public spending (created using Adobe Illustrator) or this Twitter riots interactive. Why "Infographic Thinking" Is The Future, Not A Fad We get a lot of infographic pitches. Almost all of them suck. Why? Because while they may well be "information plus graphics," they often lack what designer Francesco Franchi calls "infographic thinking." This isn’t just "how to make some numbers and vector graphics look clever together."

Gallery The "Gallery" section is new to our website. We hope to build a strong VUE community of users and thinkers. We need your help in creating a stimulating gallery area, showcasing your uses of VUE. Let us know about your maps and stories, and we will post them on this page. Featured Maps Patrick Szucs explains the use as a Tool for the Construction of Narrative. Infographic Submission Sites – The Good, Mediocre and Ones To Avoid With recent comments by Matt Cutts and the ongoing need for links, infographics have continued to be a trending topic. This prompted me to want to dig into a large list of infographic sites, several admittedly taken from one of Paddy Moogan’s extremely resourceful posts. I came out with a list of 50 & evaluated: 1. Which would give an infographic the greatest chance to get MORE links 2.

OPAC The Computerized Catalogue has replaced the old Card Drawer System in libraries that have been computerized. It lets you browse items by author, title, subject, class or ISBN number and a Keyword search is included as well. Another major advantage of this service is that one can browse items not only pertaining to the library from where he/she is making the search but is automatically browsing all the material that is present in all the Public Libraries (and the National Library) both in Malta and Gozo. Clients are also informed of whether the item in question is available or is currently on loan, for example. The 15 best tools It's often said that data is the new world currency, and the web is the exchange bureau through which it's traded. As consumers, we're positively swimming in data; it's everywhere from labels on food packaging design to World Health Organisation reports. As a result, for the designer it's becoming increasingly difficult to present data in a way that stands out from the mass of competing data streams. Get Adobe Creative Cloud One of the best ways to get your message across is to use a visualization to quickly draw attention to the key messages, and by presenting data visually it's also possible to uncover surprising patterns and observations that wouldn't be apparent from looking at stats alone.

Business - Megan McArdle - Ending the Infographic Plague Now that Obama's dog has won the War on Christmas, or something, it's time to get down to a war that really matters: the war on terrible, lying infographics, which have become endemic in the blogosphere, and constantly threaten to break out into epidemic or even pandemic status. The reservoir of this disease of erroneous infographics is internet marketers who don't care whether the information in their graphics is right ... just so long as you link it. As a Christmas present to, well, everyone, I'm issuing a plea to bloggers to help stop this plague in its track. Below the break, a tour of some of the more egregious examples, and some thoughts on why they've become so prevalent. For those of you who can't sit through all that boring writing, however, I will first deliver my message in--ahem!

Mind map A mind map about educational technology A mind map is a diagram used to visually organize information. A mind map is hierarchical and shows relationships among pieces of the whole.[1] It is often created around a single concept, drawn as an image in the center of a blank page, to which associated representations of ideas such as images, words and parts of words are added.

Best Free Tactics for Infographic Promotion by Vertical Measures This is a follow-up to my previous post where I shared the merits of infographics as unique tools for attracting backlinks and providing audiences with variety in their content consumption. So now it’s time to leverage that cool, visual graphic and release it to the social web. I’ve put together a list of some of the best ways to promote your infographic for FREE! Better yet, you can repurpose many of these tactics for other formats, making the promotional process essentially turn-key. SEO Optimized Press Release How to install Windows 10 on Raspberry Pi 2: 6 steps to bake a micro computer Introduction Windows 10 is out. If you didn’t know, you can get a free upgrade if you currently run Windows 8, Windows 8.1 or Windows 7. You lucky things. However, Microsoft has also made a totally free version of Windows 10 for Raspberry Pi 2, the super-affordable circuit board computer.

The top 20 data visualisation tools net magazine is the number one choice for the professional web designer and developer. It’s here that you find out about the latest new web trends, technologies and techniques – all in one handy package. Each issue boasts a wealth of expert tips and advice, including in-depth features and over 30 pages of advanced front- and backend tutorials on subjects as diverse as CSS, HTML, JavaScript, WordPress, PHP, and plenty more.