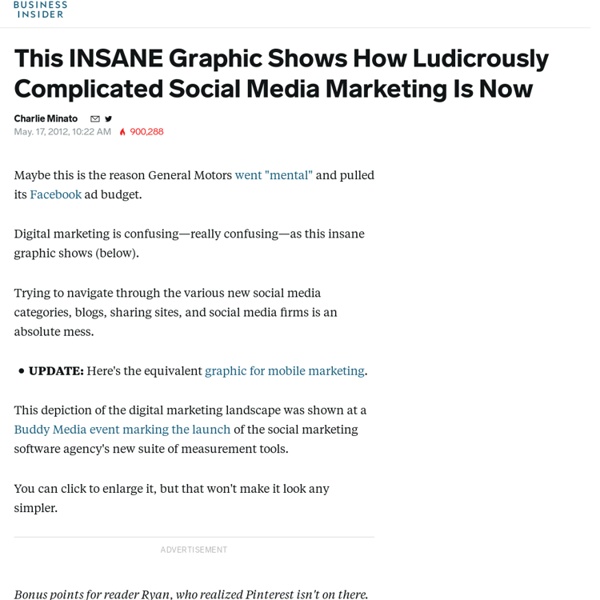 Maybe this is the reason General Motors went "mental" and pulled its Facebook ad budget. Digital marketing is confusing—really confusing—as this insane graphic shows (below). Trying to navigate through the various new social media categories, blogs, sharing sites, and social media firms is an absolute mess. UPDATE: Here's the equivalent graphic for mobile marketing. This depiction of the digital marketing landscape was shown at a Buddy Media event marking the launch of the social marketing software agency's new suite of measurement tools. You can click to enlarge it, but that won't make it look any simpler. Bonus points for reader Ryan, who realized Pinterest isn't on there. Buddy Media / Luma Partners *Red lines indicates an acquired company. See Also:

Social media outranks TV as UK's favourite pastime Social media has overtaken television as the favourite hobby of 16-24 year-olds, according to a new UK study by Click Consult. This age group talks to friends more through social media than on the phone; and on average spends almost three hours a day using social media, regardless of where they are. And 65% of 16-24-year-olds say they prefer social networking to television. “The social media revolution is not new, but for it to now take over from the nation’s favourite pastime for the younger audience, truly indicates how quickly leisure habits are evolving in our digital age,” says Managing Director of Click Consult, Matt Bullas. The social media surfing tide is also rising in older age groups, with TV and social media enjoying an equal split amongst 25-34 year olds, and some 32% of 55+ year olds saying they look at social media before their television. By Rebecca Burns

10 Tips & Tricks For Your Business's Facebook Fan Page Facebook is one the fastest growing social media network and its users are increasing by thousands every day. Due to its vast base of users, it takes no effort to acknowledge its influence and any company will jump on the bandwagon to utilize Facebook because it allows them to boost their brands or products also in the same time engage with possible clients. It is convenient for a company to create a Facebook page, publish their profile and products however, setting up a Facebook page that receive many "likes" and a huge fan base is never an easy task.

Use Multimedia to Tell Stories By Sally Falkow PR Newswire recently took a look at how press releases sent on the wire perform in terms of number of views. The stats are quite revealing: Need I say more? Adding multimedia to your press releases, articles and blog posts will give you a remarkable bump in views. Apple wants to make it easy for non-programmers to build iOS apps By Neil Hughes A new digital content authoring tool from Apple could make it simple for people without a background in programming to build their own iOS applications for the iPhone and iPad. Apple's interest in making iOS development simpler than ever was revealed in a new patent application published this week and discovered by AppleInsider. Entitled "Content Configuration for Device Platforms," it describes a new authoring tool that would allow users to create content without needing to understand or access computer code. The application notes that computer programming languages are a "hinderance to content creation," as many content creators and designers simply lack the skill and knowledge to work on the technical side of computer programming.

The best free social media tracking tools you should know about Measuring social media is one of the areas of online marketing that is still frequently discussed and we still haven’t found that magic number yet! But there are lots of free tools that can help to monitor and track your social media activity to ensure it’s working for you or you’re reaching your targets. The list presented below is intended as a guide, I don’t recommend you use them all at once, but find the ones that fit best for you and make sure you continually measure and record results, to see how your social media activity is performing overall. Facebook Analytics Starting with my favourite free social measurement tool – Facebook Insights. Facebook provide you with a comprehensive analytics suite for pages that allows you to get a full insight into your fans and how they’re interacting on the page.

How Exactly Does HP Invest in the Future? Hewlett-Packard’s (HPQ) decision to merge its PC and printing businesses into a single entity does not stand out as a terribly novel idea. The company was for this structure (under Carly Fiorina) before it was against it (under Mark Hurd). And Hurd had contemplated merging the units near the end of his tenure to chase the same proposed gains from unifying the supply chain, branding, and support that Meg Whitman now hopes to realize. What must keep Whitman awake at night are the far more daring moves that HP will need to take to reawaken its business. Chris Whitmore, an analyst at Deutsche Bank (DB), issued a research note this week that framed HP’s competitive position in the starkest of terms. Whitmore notes that HP spends less on research and development per year than IBM (IBM), Oracle (ORCL), or Cisco Systems (CSCO).

How Pinterest Drive More Online Sales Than Other Network [Infographic] Just a few weeks ago we were reading about how Pinterest monthly visitor growth was slowing down. Just some few weeks ago, we shared an article about How Pinterest Can Give Instant Growth to Your Brand and today we are going to share another article on Pinterest. Many people believe that Pinterest is the fastest growing social networking website after Facebook, but the growth of this particular site is limited to the people.

Encyclopedia Britannica to stop printing books - Mar. 13 NEW YORK (CNNMoney) -- After 244 years, Encyclopedia Britannica will cease production of its iconic multi-volume book sets. Britannica usually prints a new set of the tomes every two years, but 2010's 32-volume set will be its last. Instead, the company will focus solely on its digital encyclopedia and education tools.

A Patent Lie: How Yahoo Weaponized My Work While most of the tech world was partying at South by Southwest in Austin yesterday, Yahoo announced it was filing a lawsuit against Facebook for allegedly infringing on 10 patents from their 1,000+ patent warehouse. I’m no fan of Facebook, but this is a deplorable move. It’s nothing less than extortion, expertly timed during the SEC-mandated quiet period before Facebook’s IPO. It’s an attack on invention and the hacker ethic. In the interest of full disclosure, I have a small supporting role in this story. None of the patents I co-invented are cited in the Yahoo complaint, but a handful of applications I worked on with Yahoo were granted patents, weaponized now to use against people like me.

Clothes, Books Said Most Popular US Purchases on Mobile Devices by MarketingCharts staff 1 in 5 Shop on Overseas Sites; Security Fears Prevalent Data from WorldPay’s “Global Online Shopper Report” indicates that 22% of the US respondents shop on overseas websites, although they do have concerns about doing so. Chief among these are concerns about fraud/protecting their identity (60%), the cost of shipping/delivery (58%), concerns about shipping/delivery (57%), and worries about payment security (50%).

'Personal Cloud' to Replace PC by 2014, Says Gartner There’s no doubting the cloud invasion. But the research firm Gartner believes the personal cloud will replace the PC as the center of our digital lives sooner than you might think: 2014. “Major trends in client computing have shifted the market away from a focus on personal computers to a broader device perspective that includes smartphones, tablets and other consumer devices,” Steve Kleynhans, research vice president at Gartner, said in a statement on Monday.