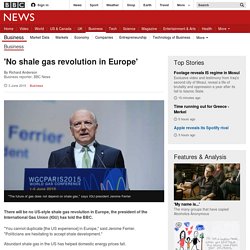 "You cannot duplicate [the US experience] in Europe," said Jerome Ferrier. "Politicians are hesitating to accept shale development. " Abundant shale gas in the US has helped domestic energy prices fall. As a result some European governments, not least the UK, are keen to develop their own shale resources. Mr Ferrier's comments come a day after a number of major energy firms called for a working price of carbon. Carbon pricing. EWAO. Terms and Conditions Welcome to www.ewao.com (the "Website"). 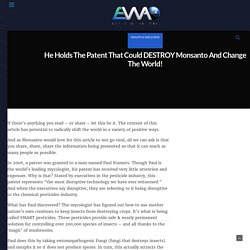 These Terms apply both to third-party contributors and viewers of content (“Content”) displayed on the Website. Website. The term Website, as defined above, includes, without limitation, information, links, Services, and any other service which may be accessed through the Website via any medium or device. Acceptance of Terms. Lawful Use of Website. Restricted Activities. Monsanto Loses GMO Permit In Mexico – Judge Sides With The Bees. A number of countries around the world have now completely banned GM food and the pesticides that go with them, or have severe restrictions against them. 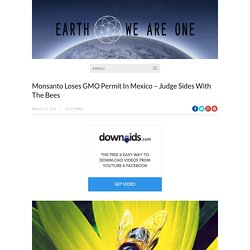 This comes after the world has experienced a massive resistance against Monsanto and other biotech giants that manufacture GMOs and pesticides. It’s (the resistance) also a result of numerous studies that have emerged showing the environmental and health dangers that are associated with pesticides, as well as health dangers that could be associated with GMOs. The latest country to make headlines with regards to banning Monsanto products is Mexico, as a group of beekeepers was successful in stopping Monsanto from the planting of soybeans that are genetically modified to resist their Round-up herbicide. Monsanto Loses Mexican Permit Monsanto had received a permit to plant its seeds on over 250,000 hectares of land, which equates to approximately 620,000 acres.

Whole Foods Slapped with Class Action Suit Over Alleged False Non-GMO Project Labels (But Confusion Reigns As to Why) The popular natural and organic foods giant Whole Foods has been hit with a class action lawsuit over improper use of the Non-GMO Project Verified label in a popular brand of almond milks. 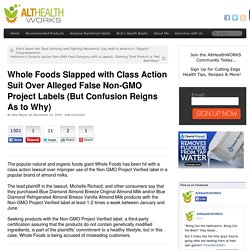 The lead plaintiff in the lawsuit, Michelle Richard, and other consumers say that they purchased Blue Diamond Almond Breeze Original Almond Milk and/or Blue Diamond Refrigerated Almond Breeze Vanilla Almond Milk products with the Non-GMO Project Verified label at least 1-2 times a week between January and June. Seeking products with the Non-GMO Project Verified label, a third-party certification assuring that the products do not contain genetically modified ingredients, is part of the plaintiffs’ commitment to a healthy lifestyle, but in this case, Whole Foods is being accused of misleading customers.

Unverified Products with Verified Labels at Whole Foods? MEPs vote to firm up national bans on GM crops in Europe. MEPs voted to allow national bans on genetically modified food crops for environmental reasons on Tuesday, even if the EU has already approved them for cultivation. 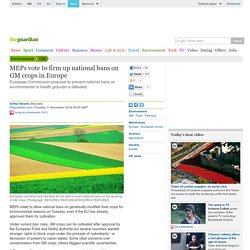 Under current bloc rules, GM crops can be cultivated after approval by the European Food and Safety Authority but several countries wanted stronger rights to block crops under the principle of ‘subsidiarity’, or devolution of powers to nation states. Some cited concerns over contamination from GM crops, others flagged scientific uncertainties. A European Commission compromise proposal which would have prevented national GM bans on grounds of environmental or health concerns was amended, after securing support from just one political bloc: the European Conservatives and Reformists, whose largest member is the UK Conservative Party. Sceptical MEP’s successfully argued that this would have allowed biotech companies to pressure states that wanted GM bans - and put them at risk of legal squabbling. Watch as Farmers Hack Away at the Nightmarish ‘Superweed That Can’t Be Killed’ (with Video) By now you’ve probably heard the news that superweeds have been ravaging genetically modified crops and making life miserable for thousands of farmers who were promised easier workloads and higher yields from genetically modified crops. 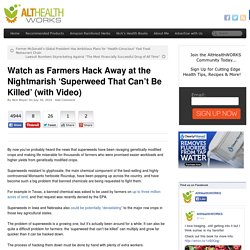 VIDEO - Organic Farmer Tours GMO Crop: “There’s No Life Here at All…This is Not Farming” US Authorities Open New GM Wheat Investigation after Montana Scandal. After conducting a thorough and scientifically detailed investigation into the detection last year of genetically engineered (GE) wheat growing in a single field on a single farm in Oregon, U.S. 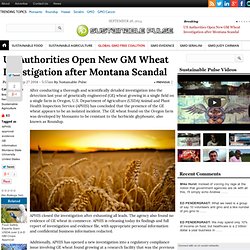 Department of Agriculture (USDA) Animal and Plant Health Inspection Service (APHIS) has concluded that the presence of the GE wheat appears to be an isolated incident. The GE wheat found on the Oregon farm was developed by Monsanto to be resistant to the herbicide glyphosate, also known as Roundup. Blacklisted: GMO Supporting Food Companies to Avoid. A genetically modified rose by any other name may smell sweet, but it could still have frankenthorns that might independently detach themselves and lop off your finger while you’re smelling it. 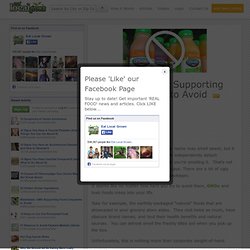 That’s not unlike a trip to the grocery store these days. There are a lot of ugly surprises in pretty, charmingly-named packages. It seems like no matter how hard you try to avoid them, GMOs and toxic foods creep into your life. Take for example, the earthily-packaged “natural” foods that are showcased in your grocery store aisles. They cost twice as much, have obscure brand names, and tout their health benefits and natural sources. Séralini Study Republished. Children Of Vietnam Veterans Health Alliance ~ Agent Orange Dioxin Survivors Uniting Internationally ~ 501C3 Registered Non-Profit © 2014 ‎(COVVHA) Children Of Vietnam Veterans Health Alliance INC. 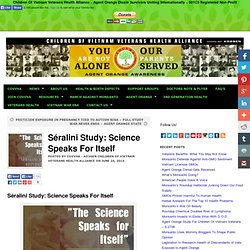 GMO whistleblower Dr. Thierry Vrain unveils insane insider information on engineered food. By Thierry Vrain I retired 10 years ago after a long career as a research scientist for Agriculture Canada. 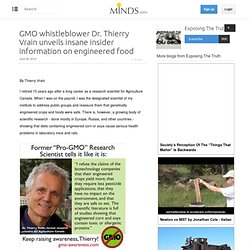 When I was on the payroll, I was the designated scientist of my institute to address public groups and reassure them that genetically engineered crops and foods were safe. There is, however, a growing body of scientific research - done mostly in Europe, Russia, and other countries - showing that diets containing engineered corn or soya cause serious health problems in laboratory mice and rats. Cancer deaths double in Argentina's GMO agribusiness areas. What we have complained about for years was confirmed ... Cancer cases are multiplying as never before in areas with massive use of pesticides. A report by the Ministry of Health in Córdoba, Argentina reveals that deaths from cancerous tumours are double the national average in areas where genetically engineered crops are grown and agro-chemicals are used. This comprehensive report documented five years of information on cancer cases in the province. GMO Activists Responsible For Decreased Kellogg’s Sales. Millions of people are making an impact when it comes to the fight against GMOs.

In one of many of the latest boycott’s against companies who use genetically modified ingredients in their products, individuals are putting the financial squeeze on one of the biggest food manufacturer’s in North America – Kellogg’s. Move to Gaza. Watch This Researcher Destroy Neil deGrasse Tyson’s GMO Argument in Less Than Two Minutes. Neil deGrasse Tyson became one of the most popular figures in recent American scientific history in large part because of the way he spoke so eloquently, and concisely, about complex topics in the realms of science and astrophysics. His TV special “COSMOS: A Spacetime Odyssey’ became a landmark program, somehow finding its way into a time slot usually reserved for less sophisticated fare like ‘Family Guy’ and ‘The Simpsons (the modern version of the show, anyway),’ Fox’s prime time Sunday slot, and helped Tyson build an even bigger following and reputation.

Jeffrey Smith Challenge to Neil deGrasse Tyson Long. Jeffrey Smith Challenge to Neil deGrasse Tyson Short. Institute for Responsible Technology - Fraud. In 2004, four advocates of genetically modified (GM) foods published a study in the British Food Journal that was sure to boost their cause[1]. According to the peer-reviewed paper, when shoppers in a Canadian farm store were confronted with an informed and unbiased choice between GM corn and non-GM corn, most purchased the GM variety.