UNDERSTANDING DEUTERIUM - The Center for Deuterium Depletion. How to Decalcify Your Pineal Gland (And Why It’s Really Important) Last update: June 23, 2020 Travel deep into the center of your brain, and you’ll find a pinecone-shaped gland. 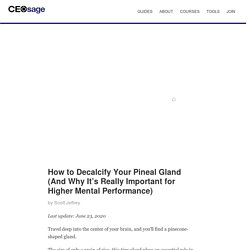 The size of only a grain of rice, this tiny gland plays an essential role in how we sleep, perform, make decisions, and perceive reality. A healthy-functioning pineal is essential for psychological development, peak performance, and spiritual awakening. In this guide—part one of an epic 4-part series—we’ll explore what this gland does, why it generally doesn’t work properly, and how to restore it. Part 1: Decalcify Your Pineal Gland (You Are Here) Part 2: Pineal Gland Detox Part 3: Blocking Artificial Blue Light Part 4: Activate Your Pineal Gland What Does the Pineal Gland Do?

The pineal gland acts as the body’s light meter. This tiny gland transmits information to the body about the length of daylight, commonly called circadian rhythm. In Light: Medicine of the Future, Jacob Liberman explains that the size of the pineal gland in animals varies depending on the animal’s location. Fluoride Action Network. As of June 2021, a total of 77 studies have investigated the relationship between fluoride and human intelligence. 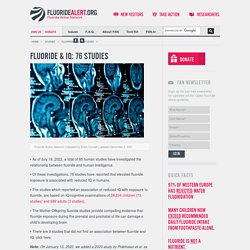 Of these investigations, 69 studies have found that elevated fluoride exposure is associated with reduced IQ in humans, while over 60 animal studies have found that fluoride exposure impairs the learning and/or memory capacity of animals. The human studies, which are based on IQ examinations of 26,142 children (67 studies) and 245 adults (2 studies), provide compelling evidence that fluoride exposure during the early years of life can damage a child’s developing brain. For a discussion of the 8 studies that did not find an association between fluoride and IQ, click here. Drinking water across the country may contain a ‘ticking time bomb’ Please Stop Using TDS (or ppm) Testers To Evaluate Water Quality. Eric Roy, Ph.D.| Scientific Founder ***Updated on February 5, 2020*** We get quite a few questions about TDS/ppm meters (like this one) and TDS measurements. 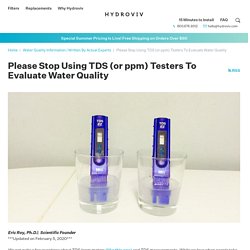 Deuterium Depleted Water, Water Filtration, Alkaline Water, & Much More! I get tons of questions about water. 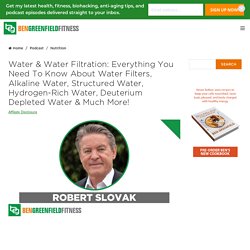 Which water filter is best? Should I add minerals to my water? (4) Dr Masaru Emoto's Water Experiments. What Is Acceptable TDS Level In Water And How To Reduce It - Pick Comfort. What is TDS? 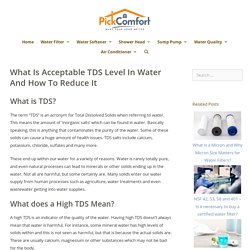 The term “TDS” is an acronym for Total Dissolved Solids when referring to water. This means the amount of ‘inorganic salts’ which can be found in water. Basically speaking, this is anything that contaminates the purity of the water. Can You Drink Heavy Water? - Deuterium Oxide Safety. Anatoxin-a. The Safe Drinking Water Act (SDWA) requires EPA to publish a list of substances that could potentially be of concern and warrant further study, known as the Contaminant Candidate List (CCL), and anatoxin-a is on the list. 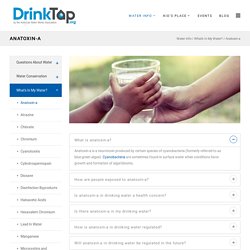 In 2015, EPA submitted a report to Congress committing to collecting additional information on anatoxin-a. Under the SDWA, EPA is also required once every five years to issue a new list of up to 30 unregulated contaminants to be monitored by public water systems. This is known as the Unregulated Contaminant Monitoring Rule. Anatoxin-a is included in the fourth round of UCMR (UCMR4). Testing for UCMR4 starts in January 2018 and will continue through December 2020. SEWER (poop) TOUR Treatment Plant. How to Remove Chlorine and Chloramine from Drinking Water? The Biophysics of Fluoride by Neurosurgeon Dr. Jack Kruse. Human Emotions Alter Water Molecules! WHO launches health review after microplastics found in 90% of bottled water. The World Health Organisation (WHO) has announced a review into the potential risks of plastic in drinking water after a new analysis of some of the world’s most popular bottled water brands found that more than 90% contained tiny pieces of plastic. 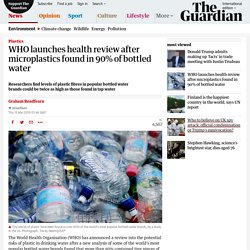 A previous study also found high levels of microplastics in tap water. In the new study, analysis of 259 bottles from 19 locations in nine countries across 11 different brands found an average of 325 plastic particles for every litre of water being sold. Concentrations were as high as 10,000 plastic pieces for every litre of water. Of the 259 bottles tested, only 17 were free of plastics, according to the study. Top 5 Reasons to Choose Filters Over Bottled Water. Most Bottled Water Is Filled With Fluoride Here's A Complete List Of Brands To Avoid Life Well Lived. Drinking water problems radionuclides. Bill Gates Invents Machine That Turns Feces Into Drinking Water. 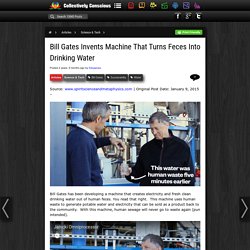 You read that right. This machine uses human waste to generate potable water and electricity that can be sold as a product back to the community. With this machine, human sewage will never go to waste again (pun intended). The following is the transcript of a conversation between Peter Lawrence of VICE and Doulaye Koné, senior program officer in the Gates Foundation’s Water and Sanitation Division, who appears in the video announcing the technology: This conversation has been edited and condensed for clarity.

Fluoride combined with even trace amounts of aluminum in water can cause major brain damage. (NaturalNews) Renowned medical doctor and neurosurgeon Dr. 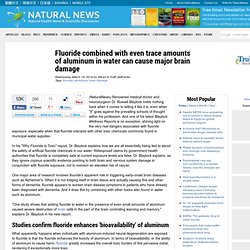 Russell Blaylock holds nothing back when it comes to telling it like it is, even when "it" goes against the prevailing schools of thought within his profession. And one of his latest Blaylock Wellness Reports is no exception, shining light on the very real dangers associated with fluoride exposure, especially when that fluoride interacts with other toxic chemicals commonly found in municipal water supplies. In his "Why Fluoride Is Toxic" report, Dr. Blaylock explains how we are all essentially being lied to about the safety of artificial fluoride chemicals in our water. Widespread claims by government health authorities that fluoride is completely safe at current exposure levels are false, Dr. Sodium Fluoride: Rat Poison, Sarin Nerve Gas, Prozac, No antidote!

First of all, it needs to be stated that the ‘substance’ referred to as ‘Fluoride’ is a misnomer – there is no such substance listed in the periodic chart of the elements, nor in the prestigious CRC handbook, nor in the sacred ‘bible’ of the pharmaceutical industry – the illustrious ‘Merck Index’. 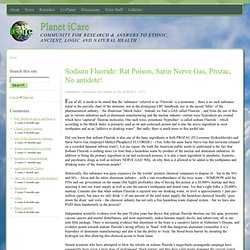 Instead, we find a GAS called Fluorine – and from the use of this gas in various industries such as aluminum manufacturing and the nuclear industry -certain toxic byproducts are created which have ‘captured’ fluorine molecules. One such toxic, poisonous ‘byproduct’ is called sodium Fluoride – which according to the Merck Index is primarily used as rat and cockroach poison and is also the active ingredient in most toothpastes and as an “additive to drinking water”. But sadly, there is much more to this sordid tale.

To illustrate the emotional vs. the scientific nature of this issue, just look at the response given by people (perhaps yourself included?) Apparently, the public outcry by Dr. Fluoride Action Network. Cancer-causing atrazine is world's No. 1 drinking water contaminant. Dr. Mercola Interviews Dr. Connett (Full Interview) Over 600 pharmaceuticals are polluting the drinking water. (NaturalHealth365) A number of reports are now showing that there is an alarming number of pharmaceuticals, including antidepressant drugs, in the water supply that we use daily. Drugs given to humans as well as animals are making their way into lakes and rivers and eventually our drinking water, with devastating effects to the food chain and the environment.

Our tap water has been shown to contain pharmaceuticals such as the antidepressant drugs Prozac and Effexor, sedatives, addictive psychoactive and anticonvulsant medications. In addition, anti-inflammatory drugs, analgesics, oral contraceptives, antibiotics, hormone replacement therapies and beta-blockers have all been found. Many people dispose of old pills improperly by flushing them down the toilet.

However, the largest contributor to pharmaceuticals in the water supply is the excretion of them by human beings. Sadly, the metabolites of many of these medications remain active long after being released into the environment. Is Your Drinking Water Contaminated with Toxic Non-stick Chemicals? Thursday, August 27, 2015 When you drink a glass of water, you expect it to be clean and pure, not contaminated with invisible toxic chemicals. Thyroid function threatened by toxic bottled water.

(NaturalHealth365) Your total body weight is made up of nearly 60 percent water. Therefore, it’s important to hydrate yourself as water has many benefits for your body. In fact, pure water is an invaluable source for treating thyroid symptoms as it regulates body temperature, relieves dry skin, eliminates fatigue, boosts cognitive function, loosens hard stools, and aids in weight loss. Printable List of Bottled Water Containing Fluoride. The world is slowly waking up to the fact that fluoride, a by-product of the phosphate fertilizer industry, wreaks havoc on the brain and body.

Despite peer-reviewed scientific evidence against it, fluoride is still added to 70 percent of U.S. public drinking water supplies. What’s more is that processed beverages and food, tea, and even bottled water contain fluoride. Is Adya Clarity Black Mica Extract a Scam? If you’re into the raw food movement, you may have heard about a product called Adya Clarity. The people who are selling (and re-selling) this product are making some pretty amazing claims.

And perhaps, like me, you’re wondering how much is hype and how much is genuine? Here’s the story behind Adya Clarity and other black mica products as stated in an email promotion: Don't drink another drop of water until you see this!! 20 Major Water Contaminants on EPA’s Regulation List ... Plus Tips for Cleaning Up Your Drinking Water. 1st March 2016 By Mark W. Untitled. Stanford Report, March 29, 2016. Obama's EPA caught covering up high heavy metals pollution across U.S. cities as federal government wages multi-faceted WAR against its own citizens. Chloramine in Drinking Water. Disinfection by-products threaten the public water supply. The Big Lie Behind The Bottled Water Industry Video. Drink Too Much Water? - You Need To See This! Do You Want To Know What’s In Your Tap Water? Infographic. The little fountain of tap water in your house seems to be something of the past, as we all use bottled water more and more.

Nowadays you can find it wherever you go—in stores, offices, airplanes, restaurants and homes. Fluoride Destroys Bone Strength and Can Cripple You. Dr. Fluoride causes 12 unwanted health effects. (NaturalHealth365) If you doubt the fact that fluoride is toxic, consider this: 20 years ago, the FDA ordered toothpaste manufacturers to add a poison warning to all toothpastes containing the chemical. Chemicals in our water. Is It Safe to Drink Deionized Water? Pure & Clear Drinking Water Filter System. 216 disinfectants part 2. EWG Tap Water Database.