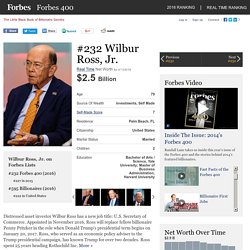 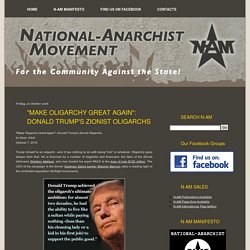 Turkey and Egypt's Great Game in the Middle East. Oil, Natural Gas May Ally Turkey and Israel. Terrorists assaulted and killed dozens in the Istanbul airport raising the prospect of Turkey on the precipice of all-out war with ISIS. 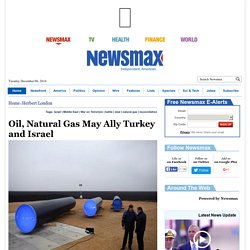 While this carnage has alarmed citizens across the European continent, there was a political negotiation that holds out some hope for the future, despite a Turkish president who often exemplifies erratic behavior. Turkish president Recep Tayyip Erdogan often acts like a political schizophrenic. Erdogan to Betray Gaza for Israeli Gas - Tikun Olam תיקון עולם. [Pervert Alert] Assistant of head of Erdogan's Party AKP Pendik Istanbul #Turkey District Yüksel Palut got caught for luring underage girl.

THE TURKISH-ISRAELI AXIS AND GREECE. By Professors M. 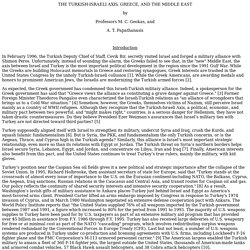 C. Geokas, and A. T. Introduction In February 1996, the Turkish Deputy Chief of Staff, Cevik Bir, secretly visited Israel and forged a military alliance with Shimon Peres. As expected, the Greek government has condemned this Israeli-Turkish military alliance. Turkey supposedly aligned itself with Israel to strengthen its military, undercut Syria and Iraq, crush the Kurds, and squash Islamic fundamentalism [6]. Turkey’s position near the Caspian Sea oil fields gives it a new political and strategic importance after the collapse of the Soviet Union.

This arsenal, however, cannot mask Turkey’s problems. The U.S. military of course would like to keep Turkey a reliable NATO partner, but American support for Turkey has its down sides. Hacked Emails Link Turkish Minister to Illicit Oil. Word of Tree - Whisper of Stone. Invocations of Resistance from Archaic Anat-olia (with images) · SuaveBel. Neo-Ottoman Nightmare Land - beBee Producer. The ISIS Emni: The Inner Workings and Origins of ISIS's Intelligence Apparatus. Two States - One Agenda: Ethno-religious 'Cleansing' (with images) · SuaveBel. Anatolia Calling: The Terror Template has Arrived. (with image) · SuaveBel. Right of Return: Neo-Ottoman Time Travelers (with image) · SuaveBel. Twilight of the West (with image) · SuaveBel. Shariah Gold Standard Approved for $2 Trillion Islamic Finance Market. Shariah Gold Standard Approved for $2 Trillion Islamic Finance Market by Jan Skoyles, Editor Mark O'Byrne The Accounting and Auditing Organisation for Islamic Financial Institutions (AAOIFI) and the World Gold Council have made an important decision which was announced yesterday at the World Islamic Banking Conference in Bahrain. 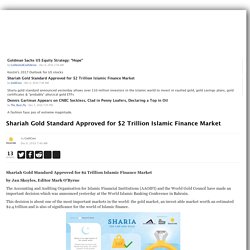 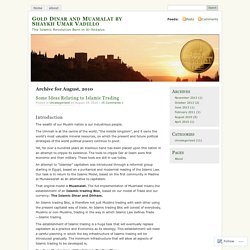 The Ummah is at the centre of the world, “the middle kingdom”, and it owns the world’s most valuable mineral resources, on which the present and future political strategies of the world political powers continue to pivot. Yet, for over a hundred years an insidious hand has been placed upon this nation in an attempt to cripple its existence. The tools to cripple Dar al-Islam were first economic and then military. These tools are still in use today. An attempt to “Islamise” capitalism was introduced through a reformist group starting in Egypt, based on a puritanical and modernist reading of the Islamic Law. That original model is Muamalat. An Islamic trading Bloc, is therefore not just Muslims trading with each other using the present capitalist way of trade.

Trump Vs China: Credit Cycles & Gold. Submitted by Alasdair Macleod via GoldMoney.com, The Trump shock produced some unexpected market reactions, partly explained by investors buying into a risk-on argument,equities over bonds and buying dollars by selling other currencies and gold. 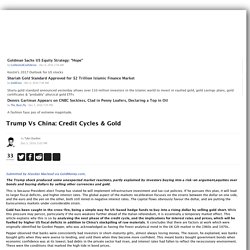 This is because President-elect Trump has stated he will implement infrastructure investment and tax-cut policies. If he pursues this plan, it will lead to larger fiscal deficits, and higher interest rates. Peak Silver & Continued Supply Deficits Warn Of Future High Prices. By the SRSrocco Report, If the market has finally experienced a peak in world silver production, this warns of higher prices in the future. 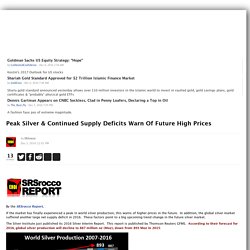 In addition, the global silver market suffered another large net supply deficit in 2016. These factors point to a big upcoming trend change in the future silver market. The Silver Institute just published its 2016 Silver Interim Report. This report is published by Thomson Reuters GFMS. While forecasted global silver production for 2016 is down only slightly versus last year, GFMS also stated this in their report: 1) We estimate that mine supply peaked in 2015 and will trend lower in the foreseeable future. 2) Declining total supply is expected to be a key driver of annual deficits in the silver market going forward.