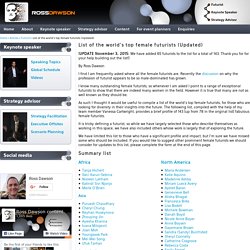 Thank you for for your help building out the list!] I find I am frequently asked where all the female futurists are. Recently the discussion on why the profession of futurist appears to be so male-dominated has grown. I know many outstanding female futurists, so whenever I am asked I point to a range of exceptional futurists to show that there are indeed many women in the field. However it is true that many are not as well known as they should be. As such I thought it would be useful to compile a list of the world’s top female futurists, for those who are looking for diversity in their insights into the future.

It is tricky defining a futurist, so while we have largely selected those who describe themselves as working in this space, we have also included others whose work is largely that of exploring the future. Guided Imagery Scripts: Free Relaxation Scripts. The free guided imagery scripts provided here allow you to relax and make positive changes. 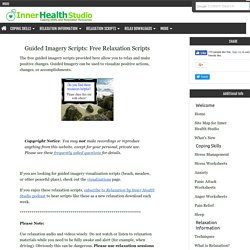 Guided Imagery can be used to visualize positive actions, changes, or accomplishments. Copyright Notice: You may not make recordings or reproduce anything from this website, except for your personal, private use. Please see these frequently asked questions for details. Futurism Needs More Women. In the future, everyone’s going to have a robot assistant. 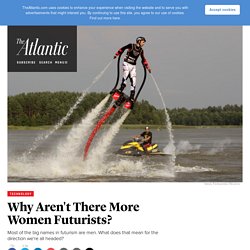 That’s the story, at least. And as part of that long-running narrative, Facebook just launched its virtual assistant. They’re calling it Moneypenny—the secretary from the James Bond Films. Which means the symbol of our march forward, once again, ends up being a nod back. JFS19-4-Article3-Novaky-Orosz.pdf. The Next 20 Years: A Time of Transformation. Future of identity. The Chinese Generation’s Social Context: 6 Big Shifts. There are six major social shifts in Chinese society that will make all of China’s generations dynamic for the foreseeable future. 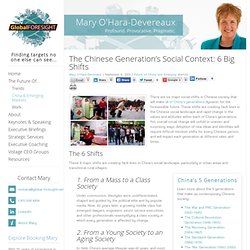 These shifts are creating fault lines in the Chinese social landscape and rapid change in the values and attitudes within each of China’s generations. Yet, overall social change will unfold in uneven and surprising ways. Adoption of new ideas and identities will require difficult mindset shifts for every Chinese person, and will impact each generation at different rates and times. The 6 Shifts These 6 major shifts are creating fault lines in China’s social landscape, particularly in urban areas and transitional rural villages: 1. Under communism, lifestyles were undifferentiated, shaped and guided by the political elite and by popular media. 2.

In 1949, China’s average lifespan was 42 years, and most women gave birth to more than five children. 3. 4. China’s communist government was traditionally responsible for the people’s total welfare. Hinesight....for Foresight. Much of my professional life has been motivated by the desire to help organizations make greater use of foresight. 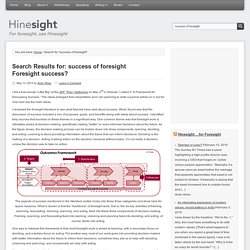 Early in my consulting career, working with Coates & Jarratt, Inc., I was surprised by how often our client loved our work, but did not know what to do with it internally. I spent almost a decade working inside two Fortune 500 companies in order to see for myself, and recently wrote my dissertation on the topic. At the recent APF Professional Development Seminar, I had a few minutes to summarize some “lessons learned” in applying foresight. Dr Popper's Foresight & Horizon Scanning Blog. Abstract of my PhD Thesis on 21st Century Foresight 21st Century Foresight offers a comprehensive study of ‘foresight’ as an instrument of policy. 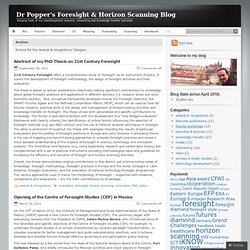 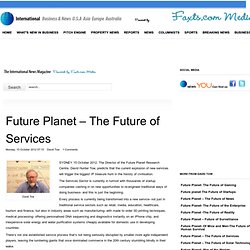 The Director of the Future Planet Research Centre, David Hunter Tow, predicts that the current explosion of new services will trigger the biggest IP treasure hunt in the history of civilisation. The Services Sector is currently in turmoil with thousands of startup companies cashing in on new opportunities to re-engineer traditional ways of doing business- and this is just the beginning. Every process is currently being transformed into a new service- not just in traditional service sectors such as retail, media, education, healthcare, tourism and finance, but also in industry areas such as manufacturing- with made to order 3D printing techniques, medical processing- offering personalised DNA sequencing and diagnostics instantly on an iPhone chip, and inexpensive solar energy and water purification systems cheaply available for domestic use in developing countries. 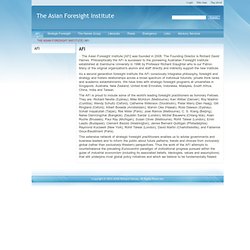 The Founding Director is Richard David Hames. Philosophically the AFI is successor to the pioneering Australian Foresight Institute established at Swinburne University in 1996 by Professor Richard Slaughter who is our Patron. Many of the original organization's alumni and staff directly and indirectly support the new Institute. As a second generation foresight institute the AFI consciously integrates philosophy, foresight and strategy and fosters relationships across a broad spectrum of individual futurists, private think tanks and academic establishments. We have links with strategic foresight programs at universities in Singapore, Australia, New Zealand, United Arab Emirates, Indonesia, Malaysia, South Africa, China, India and Taiwan. 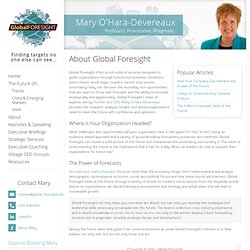 Leaders cannot only survive uncertainty; they can discover the incredibly rich opportunities that are open to those with foresight and the ability to innovate strategically and aggressively. Global Foresight’s team of experts, led by founder and CEO Mary O’Hara-Devereaux, provides the research, analysis, insight, and advice organizations need to meet the future with confidence and optimism. Where is Your Organization Headed? What challenges and opportunities will your organization face in two years? In five? The Power of Forecasts Accurate and useful forecasts focus on more than the economy; longer-term views examine and analyze demographic, technological, economic, social, and political forces and how these trends will intersect. Trends. Foresight Culture. Anticipation and Foresight. Z_punkt The Foresight Company: DOWNLOADS. OCAD University - Graduate Programs - Strategic Foresight and Innovation - Program Requirements. For more information please visit the Graduate Course Calendar. 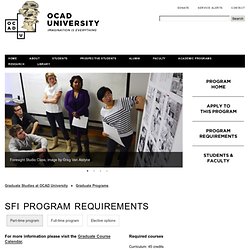